You’re going to name your baby what?! 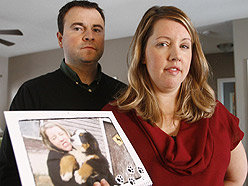 Whilst perusing the internet today, I stumbled upon this crazy story about a couple and their missing dog. But hold on folks, this isn’t about a dog that’s been missing for years only to suddenly return, this isn’t even about a puppy lost in the big city. Nope. Instead this about about a named Molly Jane and the Ottawa couple who are offering a fairly unique reward.

You see the couple is so desperate to get their Bernese mountain dog back that they’ll name their first born child after whoever returns the dog.

Wait. I’ll type that again. Dan and Sara Cannon are going to name their child after whoever finds their dog!!!!

I still think I need a moment.

You know those times when your brain thinks of so many jokes at once, that it can’t come up with a single funny thing to say? Well this is that moment.

While I understand the desperation to find a lost puppy, the reward seems a bit ridiculous given the consequences. It would be nice to think that someone named John, Peter or Laura will bring it back but part of me thinks someone named McDonalds or TableCloth will mysteriously find the Molly Jane.

Then again, people who don’t have to offer such things to get their puppy back, name their kids Kaeolen and Jessyca. So who knows, this might just work for The Cannons.