You should see my kitchen! 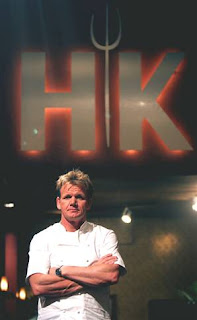 Holy Chr**t, I can’t f**cking believe that Hells Kitchen is back already! Thank God for the f**cking show and the sh*t-a*s writer’s strike!

That’s right good ol’ Chef Ramsay is back 2 months early this year with a whole new batch of chefs, all of whom have no idea how to cook risotto. What the hell is risotto anyway? And if you were going to go on Hells Kitchen wouldn’t you learn by now how to cook it. It seems pretty obvious that he is going to ask you to make it. I guess it’s sorta like the people who don’t know how to drive standards on The Amazing Race or people that do nothing on Survivor all in an attempt to “save energy”.

If you’ve never watched Hell’s Kitchen before make sure you stick around after American Idol (finally it’s down to an hour) and catch all the mayhem. Plus it’s awesome fun to see all the excuses Gordan uses to keep the less talented yet prettier chefs around until the finale.