You should know: Dan Vacon 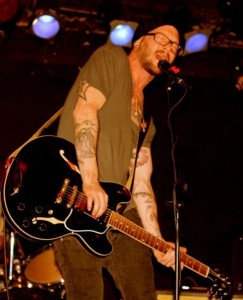 You probably don’t know who Dan Vacon is, but you definitely should.

Vacon is one of Calgary’s biggest musical exports and yet, for some reason his bands aren’t as big as they should be nation wide. Â After watching one of Vacon’s band (The Dudes) a couple of weeks ago, I tossed and turned in bed all night wondering why these guys aren’t selling out stadiums over Canada.

I’m no music critic, but every show that I’ve ever seen Vacon in, has always left me captivated. Â There is just something about him. Â I don’t know whether it his instantly recognizable voice, the fact he oozes cool, or (and most probable) is that this guy knows how to rock out on stage. Â Theory of a Nickelback41 should take note: Vacon will be your rock inspiration. Â And while I don’t think it will be long until either of his bands, The Dudes or Dojo Workhorse break into the mainstream, I’m definitely growing impatient. Â The city of Calgary loves these guys and they especially idolize Dan.

Don’t wait for the bandwagon to get full. Â Start listening and loving anything Vacon touches. Â  By default, you will be that much cooler.

Take a listen to what you are already missing out on:
The Dudes: