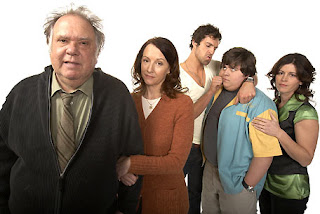 The Writers Guild of Canada have just announced the nominees for the 14th Annual WGC Screenwriting Awards.

Even though most people wouldn’t get very excited about these nominations, they did end up having a quite a shocker. City TV’s Less Than Kind picked up four of the five nominations in the ‘best half-hour episodic’ category.

I know what you are thinking: What the hell is ‘Less Than Kind’?
The show is about a dysfuntional Winnipeg family, like there is any other the kind. The show didn’t garner huge ratings on CITY TV and the network canceled it after one season. However, HBO Canada saw it’s potential and just started airing the show’s second season!
I wonder if CITY TV is having second regrets?
Here is the complete list of nominees. Nice to see even Being Erica getting some love!
Animation
Grossology “New Recruits.” Written by Richard Clark
Total Drama Action “Crouching Courtney, Hidden Owen.” Written by Alex Ganetakos
League of Super Evil â€œGlory Hog.” Written by Philippe Ivanusic-Vallee and Davila LeBlanc
Total Drama Action “The Sand Witch Project.” Written by Shelley Scarrow