Would you watch a Russell Williams movie? 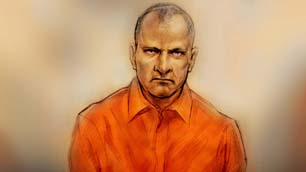 This is the first and only time I will write about this, but I just read that the horrible story of Russell Williams is going to be turned into a movie and I have to just to say something about it.

It was just announced by Penguin Group and Richard Lowry Productions Inc. that they have bought the movie rights to the yet to be released book Camouflaged Killer: The Shocking Double Life of Canadian Air Force Colonel Russell Williams, by David A. Gibb.

While I know my job (I hired myself) is to report on Canadian media, I hope to not write about this gross project ever again.Â  In this day in age, do we really need a movie showing us how Williams murdered and/or sexually assaulted multiple women?Â  I mean, we saw his confession, we followed his trial, we know what happened.

Thinking about this movie, I can’t even imagine what it would be like to experience it in a theatre.Â  I certainly wouldn’t be eating any popcorn, that’s for sure.

The book comes out on October 4th and the movie will go into production next year.