This past weekend, I visited the small mountain town of Jasper, Alberta to be a referee in their third annual Snow Battle, also known in Japan as Yukigassen.

Yukigassen is basically a snowball fights mixed in with the rules of dodgeball and capture the flag.Â  When I first saw the rule book, I was a little overwhelmed, but once it was explained to me, it totally made sense and now I think I’m kind of obsessed. I mean, what’s not to love?Â  Those are basically my three favourite sports, add in the fact that you’re playing outside, surrounded by the beautiful rocky mountains and you have what I think will someday be Canada’s national sport. 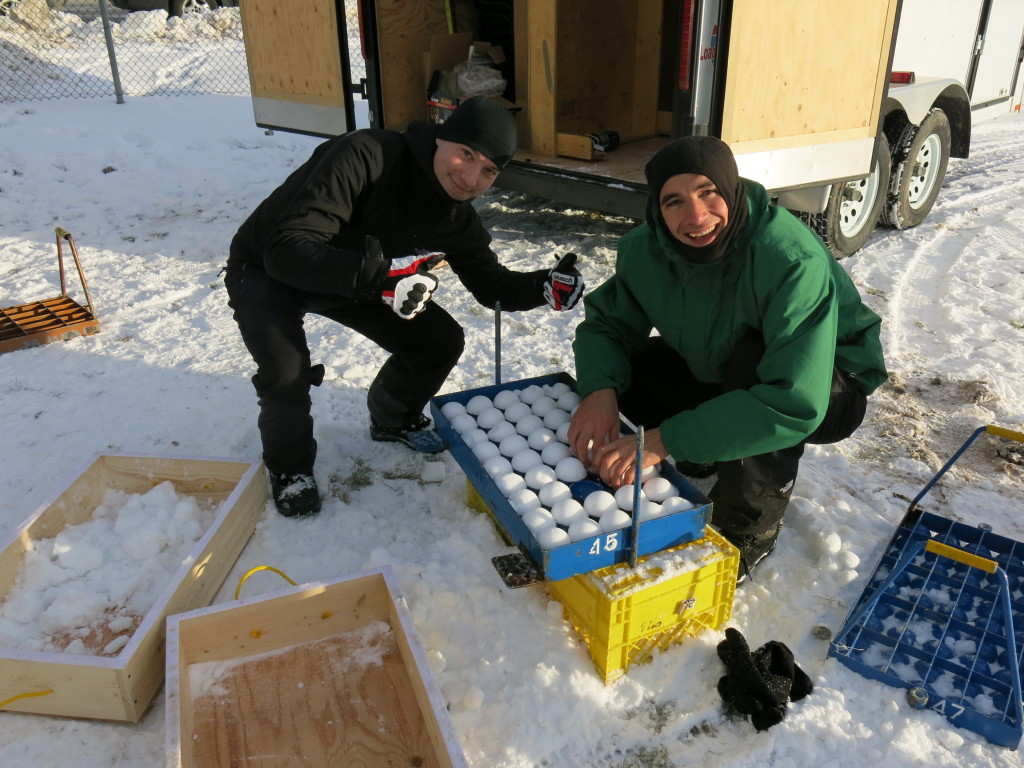 To quickly explain Yukigassen, there are two teams of seven. The goal is to get the flag on the opposing team’s side, but each team is armed with 90 snowballs. Get hit by one, you’re out!Â  Get the flag and your team wins the round.Â  It’s best two out of three. Each round is only three minutes, so once it gets started, there’s a flurry of snowballs and it’s over before you know it, but it’s also incredibly fun to play, watch and like I did this weekend, ref!

While it’s a fairly new sport in Canada, they’ve actually been playing it for twenty five years in Japan, where some say they’d like it to be an Olympic sport. 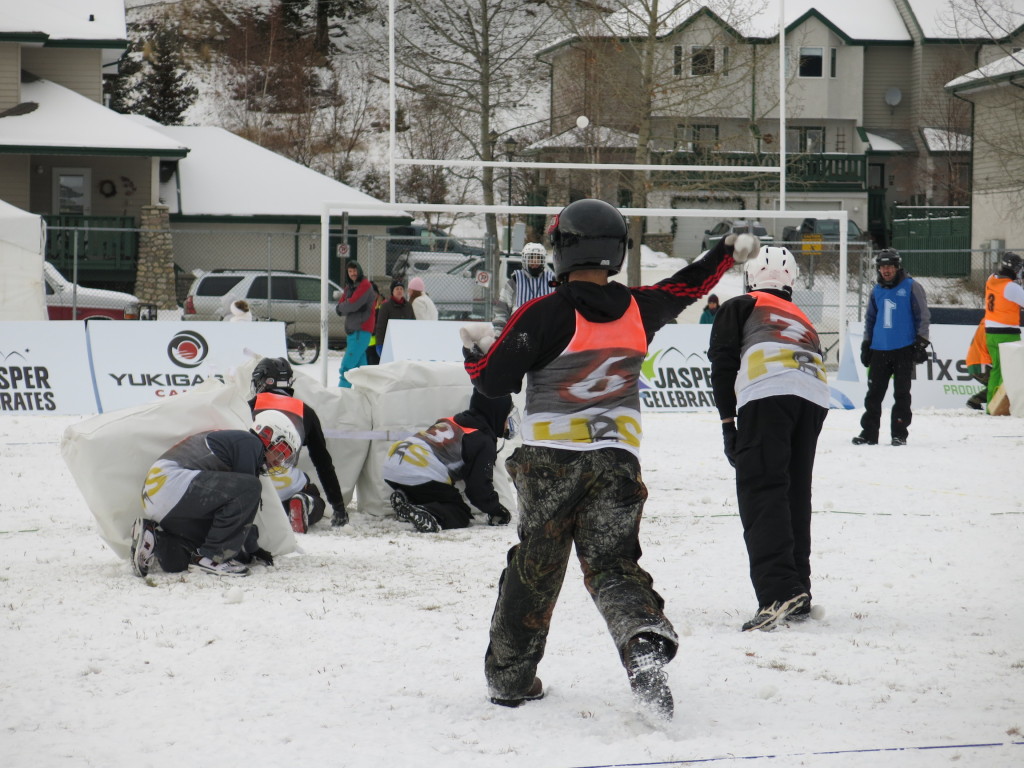 This weekend’s Snow Battle featured about 15 teams from all over the province, some had played before, most had not, but all came to play, which was awesome to see.Â  Since anyone who wants to play can sign up, the teams featured a wide array of people, including some special guests in the form of a Japanese reality show. Quest to the End of the World features some of the country’s biggest comedic stars (think Steve Martin, Jim Carrey) competing in challenges around the world and the fact that one of their competitions was Snow Battle, it definitely caused some extra excitement.Â  Each of the stars had their own cameraman and producer andÂ  as luck would have it, I spent the day refereeing the Japanese team’s games, which was extra fun because even if I didn’t know who they were, you could tell that they were definitely characters. 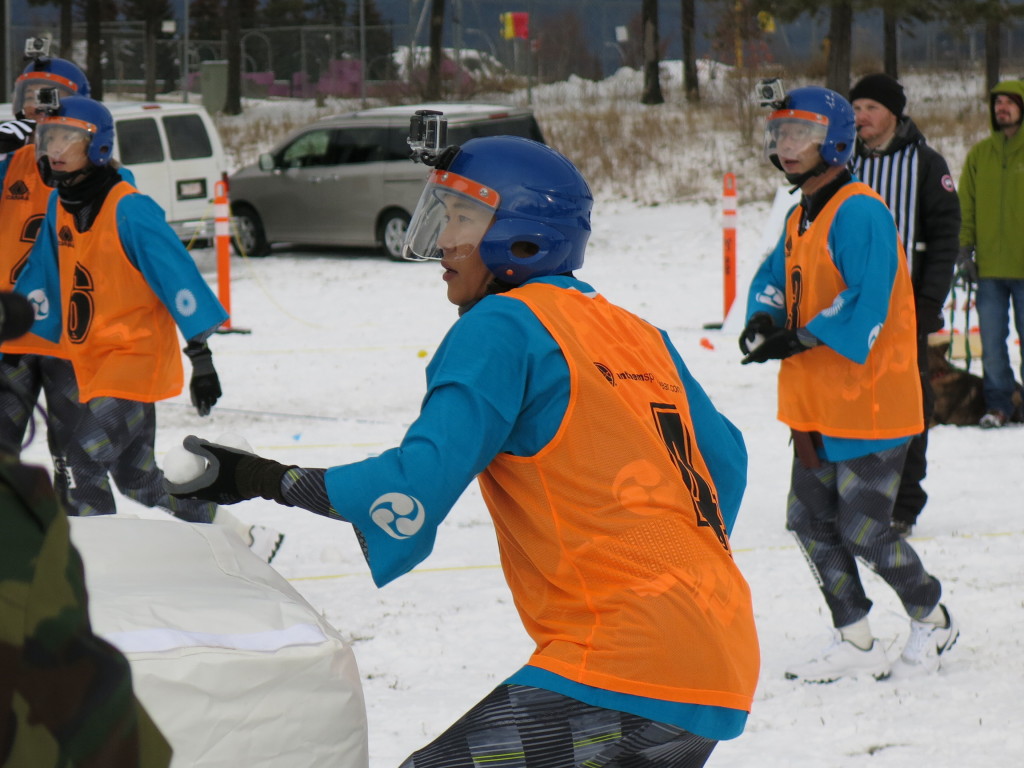 Since my dad has been a hockey referee for my whole life, I took my gig as a Yukigassen referee very seriously, which means that the Japanese team didn’t end up liking me very much.Â  You see, the snow battle happens so quickly, it can be hard to remember all the rules and notice that you even got hit by a snowball, so as a referee, it’s my job to make sure that the rules are being followed.Â  And there’s nothing I love more than rules.Â  When this particular episode of Quest to the End of the World airs to over 18 million people in Japan, I’m pretty sure they’re going to edit me as the mean bald referee. It wasn’t that I was being mean, but again, I love rules and I love calling out people when they aren’t following them, A-list celebrity or not.

I was able to grab some video of one of the rounds, which ended up featuring me and one of my controversial calls.Â  You see, in Yukigassen, you’re not allowed to pass the snowballs, you have to roll them to your teammates and this one particular celebrity forgot about that rule. Luckily, I don’t miss a thing.

When the dust, rather snow, had settled on the day,Â The Canadian SnowBattlers were named Snow Battle champions.Â  They actually won last year and went on to compete in Japan, so here’s wishing them lots of luckÂ  as they represent this country halfway around the world.

Until then, I’ve come back to Calgary raving about this amazing event.Â Â  Why isn’t it bigger in this country, after all, we pretty much have snow ten months of the year. Or maybe the charm of something like Yukigassen is that a small town like Jasper can own it and turn it into something big? After all, there’s nothing wrong with coming up with yet another reason to visit one of the cutest mountain towns in the country. 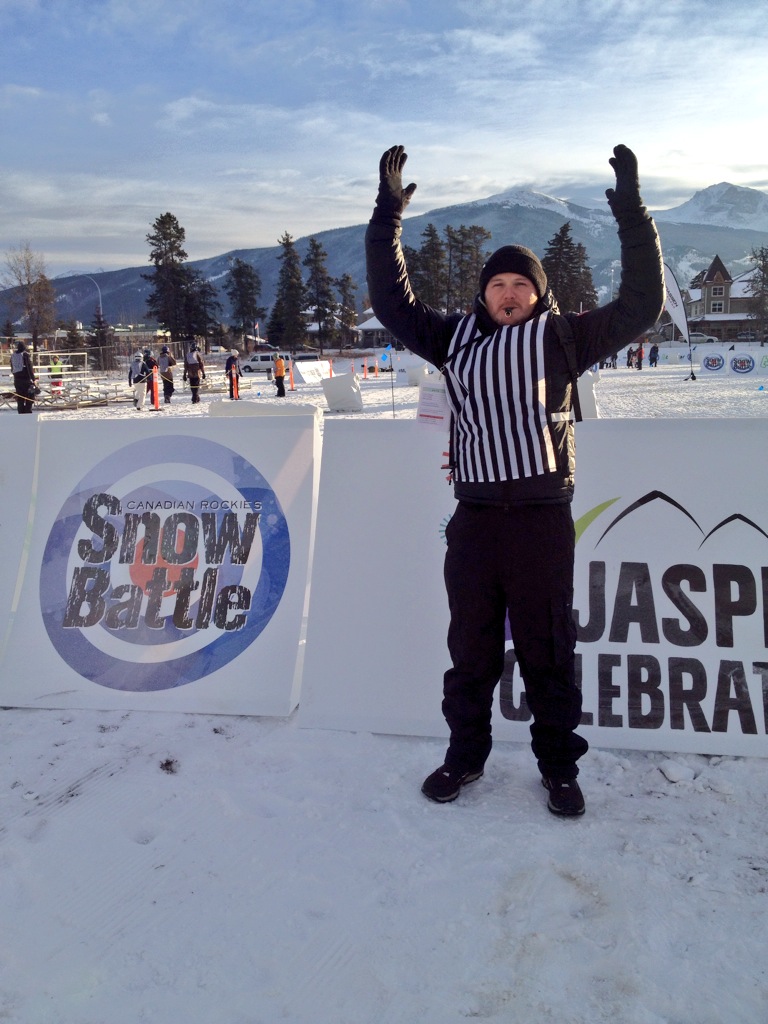 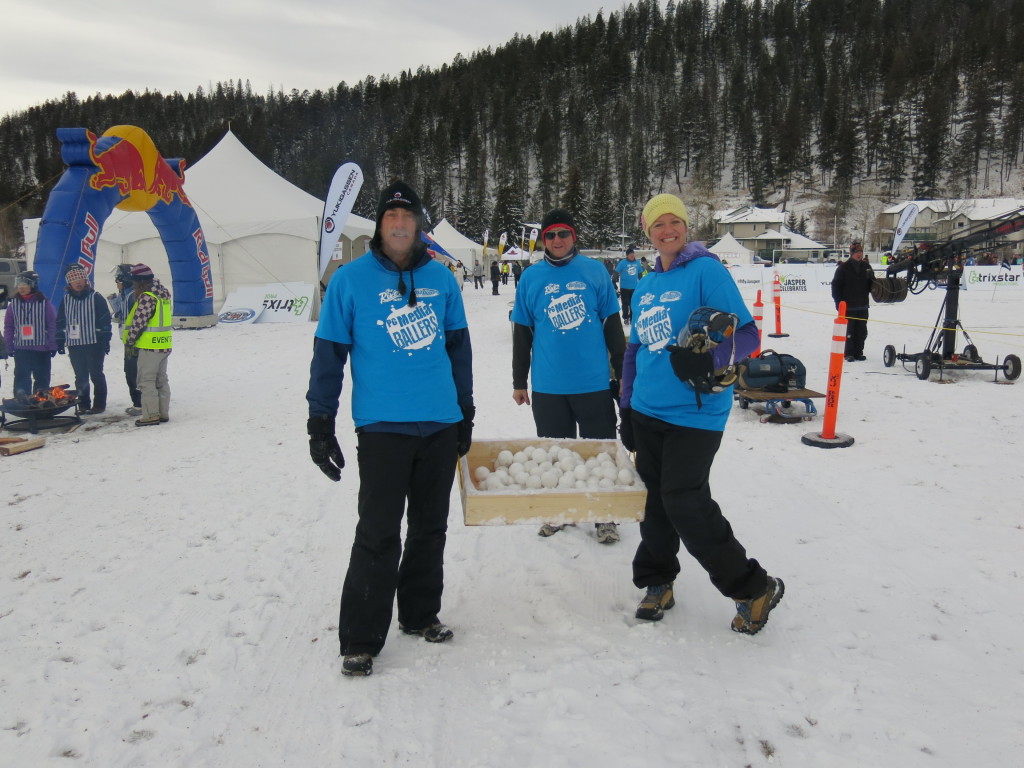 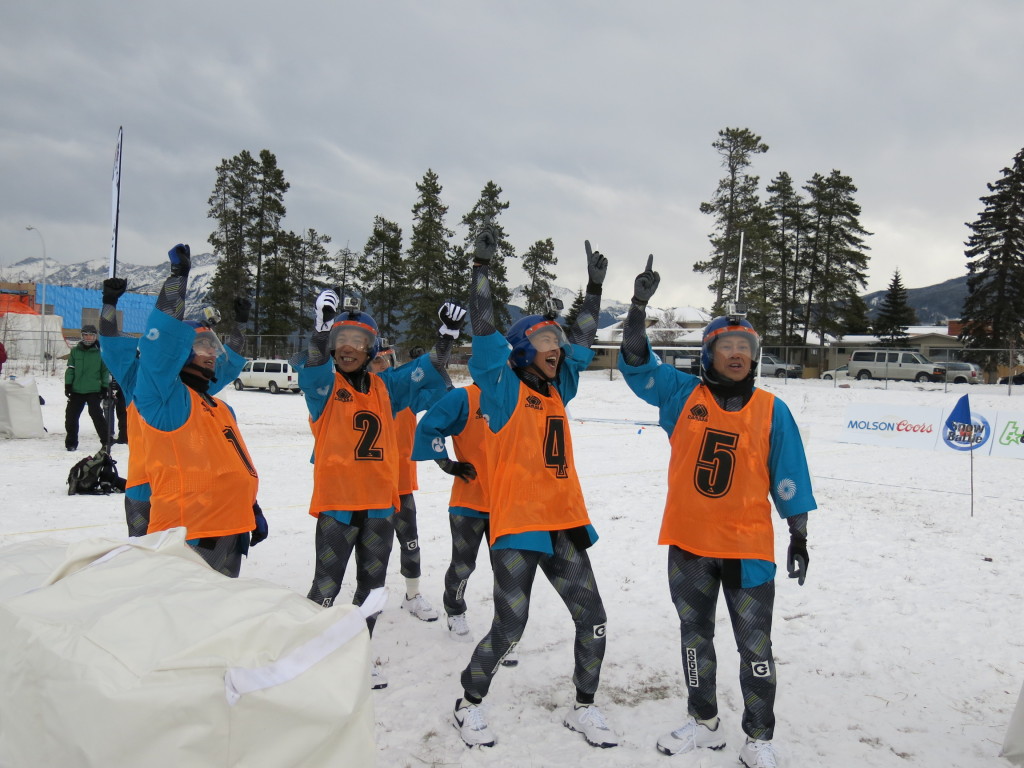 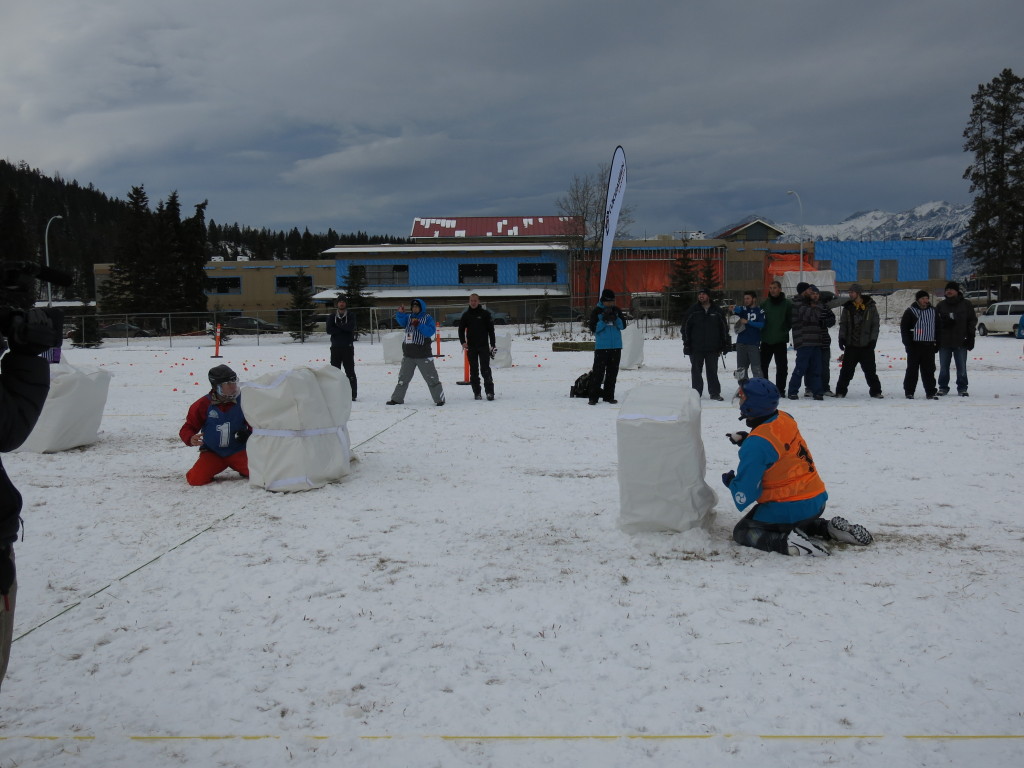