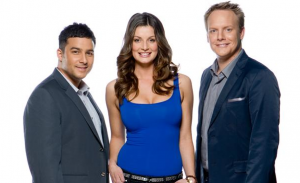 Have you applied it Wipeout Canada yet?  I’m still getting my application together, but I wanted to remind you that you only have two weeks to get it together!  Don’t procrastinate: apply!

Applications close on July 1st, so I figured now would be as good as time as ever to meet the hosts of the show that I’m eventually going to win.

Jonathan Torrens will be hosting along with Ennis Esmer.  If you’ve looked a TV, you’ll recognize Torrens from Street Cents, Jon-O-Vision and The Trailer Park Boys.  Sadly, he is also currently hosting the weak The Soup rip-off called TV with TV’s Jonathan Torrens.

You may not necessarily know Esmer.  But he seems to be everywhere!  He is currently hosting The Toronto Show, he also starred in the Genie award- winning romantic comedy Young People Fucking.  He’s also made guest appearances on CBC’s The Border and Murdoch Mysteries. He also snagged a recurring role on Covert Affairs on USA Network.

Stepping in for the Jill Wagner role will be Jessica Phillips. Her big break into television came when she appeared as one of Howie Mandel’s briefcase models on the smash-hit game show Deal or No Deal Canada. She’s also had parts Billable Hours, Pure Pwnage, Republic of Doyle and Being Erica.  Plus she’s hot.