Winnipeger wins big on the Price is Right! 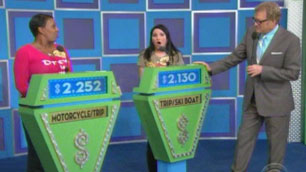 “A woman from Winnipeg has done what I’ve always wanted to do!”

In an episode of The Price is Right that aired this past Friday, Angelina Goertzen made it all the way to the showcase showdown and ended up narrowly winning the big prize!Â  She beat her PIR rival by only $122! When the show was filmed last month, it seemed like luck was already on her side.Â  She was one of those fortunate contestants that was the last one called down and then immediately won her way on to the stage next to Drew Carey.Â  (Imagine how pissed those people who were stuck in contestants row were!)

By the end of the show, Angelina had won a boat and a trip to Mexico but opted for a cash payout instead of the prizes because really, who needs a boat in Winnipeg?Â  She ended up pocketing $25,000!