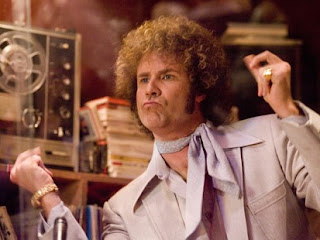 Well it’s that time of year again. Will Ferell has a new movie out and it’s probably going to destroy the box office. Have you seen the trailers? It’s the one where he plays a crazy out of date sports star. No not Kicking and Screaming. It’s the one with all the product placements, no not Talladaga Nights either. Oh come on! You’ve seen the preview, it’s the one where he just goes around yelling….no it’s not Blades of Glory.

No this weekend Will Ferrell stars in his fourth sports movie in less than three years called Semi-Pro! The movie is about a ragtag basketball player obsessed with sports and sex. Sound familiar? Yikes. This is just getting ridiculous. Don’t 4 identical movies seem a little excessive Will? I mean really, we got the joke the first, second and third time. Why don’t we try something new?

Which brings me to another point. Are we done with Will Ferrell? I mean, yes, he is still funny and a rare natural talent. But aren’t we done with the Will Ferrell that has pretty much been doing the same stuff since Old School? Aside from side projects like the wonderful Stranger than Fiction, Ferrell’s career seems to be in a comedic rut, which is ironic because one of the reasons that he became one of SNL’s biggest stars was because we never knew what to expect from him. Sadly it seems that that time has past.

After all, isn’tt time for actors like Ferrell, Jack Black, Owen Wilson, Vince Vaughn and Steve Zahn to step aside and make way for the new Comedy Mafioso Judd Apatow and his gang of fresh comedic darlings. After super hits like Knocked Up and Superbad they are certainly the new comedic brat pack and don’t they just make Will Ferrell come off as old and tired?

But Semi-Pro will still have an amazing box office weekend and then probably fade pretty quickly, just like a certain someones career if they aren’t careful.