Why Lilly Singh is the best thing to happen to...

A quick recap: Lilly Singh, is a Toronto YouTube sensation who’s amassed more than 11 million YouTube subscribers (Hockey Night In Canada averages about 2.2 million viewers for a game.) Â She’s also just released her first book “How to be a Bawse” which has been a best seller for more than three weeks. And to your kids, she is The Beatles. I’m not kidding.

This week, Singh came to Calgary on a book tour with Wordfest. Â I was actually supposed to host the Q+A, but Lilly wanted to give her own presentation, which makes sense, since she pretty much does it for a living. The event almost immediately sold out, packing MRU’s conservatory with 700 teenagers (and a few parents) making it Wordfest’s biggest event ever.

I know, you have a lot of questions. Â How can this person be so popular (she apparently made more than $6 million last year) and you still have no idea who she is? Â Well, my friends, that’s social media and YouTube for you. Â No longer do you have to be a house hold name to be deemed a star. No, instead, you can grow your own following of passionate fans, and before you know it, you’re selling out venues across the world, even though those who are normally in tune with mainstream media have never heard of you.

So what was the event like? Well, I’ll let her intro give you an idea. Â I recommend you turn down your speakers.

The reception for a YouTube star is something all my media friends should take note of. @IISuperwomanII was amazing. pic.twitter.com/lTwdZJiJ3a

I told you. To those kids, Lilly is their Beatles, and I’m sorta okay with that.

Once Lilly took to the stage, I sat back and watched a master at work. It was fascinating. Â Near the beginning, she surprised the audience and told them that they’d each get a photo with her after the show, so to put away their phones and just listen. And you know what, they did. I watched and I think I saw one or two phones throughout the entire 90 minute presentation, and one of them was mine. Â And yes, you read that right. When the show was done, Singh stayed and took more than 400 photos with each of her fans for free. Â How many bands or celebrities would do that? Â YouTube stars are different, and that’s a good thing.

So what did Lilly talk about? You know, normal stuff. Â Like having trust issues, holding yourself accountable, being okay with failure and how life makes it hard to do the right thing. And perhaps, most importantly, why girls have to stop knocking down other girls. 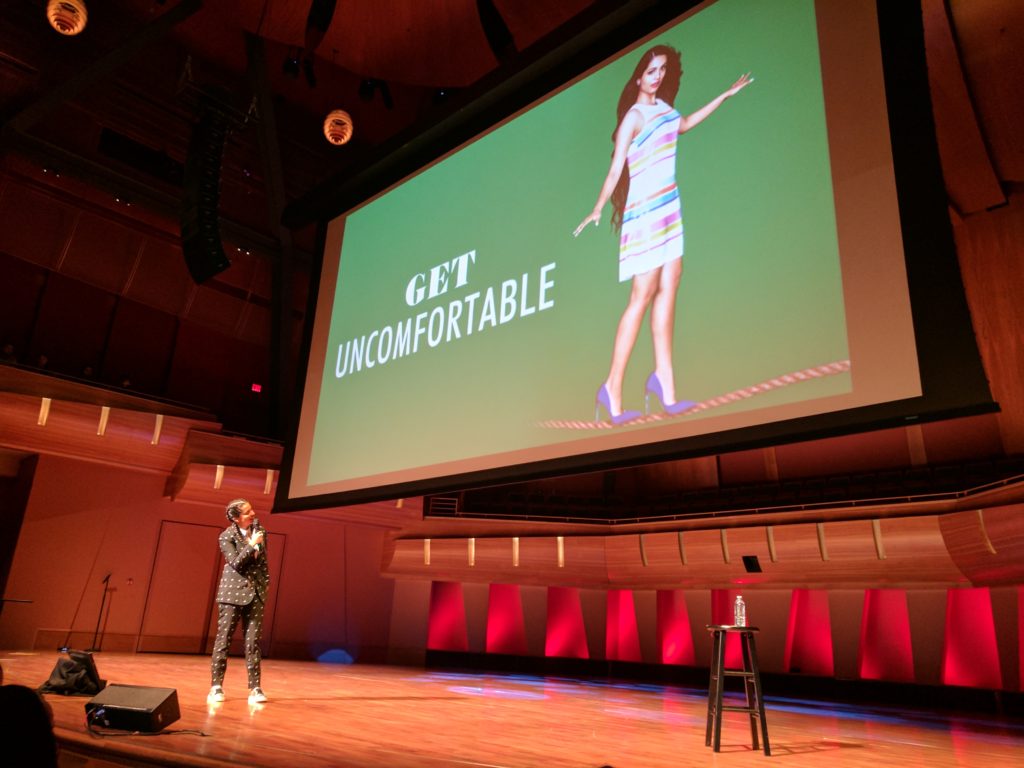 It was a presentation packed with powerful messages and the audience devoured every word. Why? Because Lilly talked to these teenagers like they were adults. Â She didn’t diminishÂ them, no once. She respected each of their problems for the importance that it felt like that to them, and that’s a really hard thing to do.

I hate using the word kids, but that’s what so many of them in the room were. They were, if I had to guess, mostly in middle school, with a sprinkling of high school, and though Lilly is nearing 30 (which is ancient in the eyes of a 12 year old remember), they didn’t care. They believed what she said. They screamed, they laughed, they applauded and I think, they learned a lot. And anyone that has ever tried to teach a teenager, knows that that is not always the easiest thing to do.

When the show was done, I was talking to a parent in the lobby and we agreed. If the kids in the audience applied 10% of the lessons Lilly shared with them, the world would be an infinitely better place.

Lilly also goes by the nameÂ IISuperwomanII, and it’s easy to see why. Everything about thatÂ night was super. I hope Lilly’s video’s became required viewing in schools. I think we’d all be better for it.