Why I hate/love The Amazing Race. 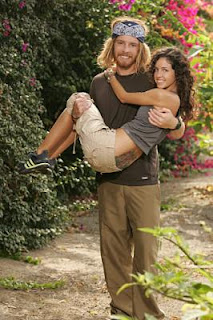 Have you been watching the Amazing Race this season? It’s kinda been getting the shaft since it was forced to run two new episodes during the holiday season, when basically no one watches (except for me AND my sister).

But the Amazing Race is still the most exciting and unpredictable show on television and that is why I pretty much haven’t missed an episode in the 12 seasons it has been. Yes, I even sat through the Family Edition.

And with the writer strike making me sadder and sadder, I probably end up getting too excited for each Sunday to come around to get my dose of this amazing race around the world.

Well if you were watching Sunday night you saw why I love this show. TK and Rachel have to be some of the best contestants this race has ever seen. They are smart, funny and polite. Plus no matter how far behind they are or stressed out they should be, they simply don’t get mad at each other.

When they do argue it sound like this:
TK: “I am feeling really angry right now. Not at you, but at the situation.“
Rachel: “I know right, I am also angry. Would you like a hug?“
TK: “Yes, and I would also like to read Mike’s Bloggity Blog Blob.”
Rachel: “One thing at a time honey.”

Or something very similar.

So tonight when TK and Rachel made a fatal error (exaggerated of course) and ended up more than 3 hours behind the other teams, I thought that I finally had to say goodbye and root for the grandson and grampa team!

But luckily TK and Rachel were saved by the final Non-Elimination round. Which if you ask me, was probably moved up by the producers to save this fan favorite team. So while I hate the show for always stressing me out, I love it for it’s sketchy practices ensuring a more exciting finale.

Here’s to you TK and Rachel. Look out Speed bump ahead.