Why Does Jasper Even Celebrate Pride?

“Why Does Jasper Even Celebrate Pride?”

Thatâ€™s a question I heard a lot during the weeks leading up to my visit to the small rural mountain town, five hours north west of Calgary. In my lifetime, celebrating pride has gone through this weird mutation. At first, Pride was much more secretive. The first Calgary Pride celebrations twenty five years ago, people wore masks to protect their identity. People who donated money to the cause, did so using cash, so the banks wouldnâ€™t find out that they supported LGTBQ rights. Thatâ€™s in my lifetime. Then, as Pride celebrations became more and more important, and yes, more and more fun, the idea of celebrating equality became top of mind. Cities like Toronto, Montreal and Vancouver led the charge, while smaller municipalities quickly followed suit. And now, now weâ€™ve reached a point where some people, usually the younger ones ask â€œWhatâ€™s the point?â€ Not necessarily in a negative way, but in a way that shows that equality has become such a non-issue for the next generation, they donâ€™t see what all the fuss is about.

So itâ€™s interesting to go to a town like Jasper, which just celebrated its sixth Pride in March, because it seems to some that maybe theyâ€™re late to the party, as it were. But I would argue that theyâ€™re coming in at exactly the right time.

As a gay manâ€¦that sounds weirdâ€¦.letâ€™s say, As a gay guy, when I travel I want to be myself. Myself isnâ€™t that particularly different from everyone else, but should I want to hold my boyfriendâ€™s hand, or ask someone to take a picture of us, I want to do so knowing that there is zero percent chance of any hostility. Itâ€™s something that many people take for granted, but I can tell you that every time I ask someone to take our picture, itâ€™s a nerve-wracking experience for me, which is probably why I got a selfie-stick. But to go to a place and know that no one is going to do a double take, and know that the server might assume that we just want one bill, and to know that the front desk clerk at the hotel assumes we just need one bed without questioning why, well thatâ€™s a relief to me and to a lot of people. Sure for many more people itâ€™s become a non-issue, but for people whoâ€™ve lived it being an issue for so long, itâ€™s going to take us some getting used to.

So having a town like Jasper, which is known around the world for lots of things including fantastic skiing, amazing hikes, stunning lakes and wildlife, declare that itâ€™s also a place for the LGTBQ community, well thatâ€™s huge and worthy of a big celebration. The thing to remember is that now that Jasper is celebrating Pride, it doesnâ€™t mean that for four days itâ€™s gay-friendly, because thatâ€™s not true. Jasper Pride is an international declaration that any time of year, the LGTBQ community is welcome and that wonâ€™t take long to get around.

Since the town of Jasper is such a household name, itâ€™s easy to forget that it is a rural town. Itâ€™s at least four hours away from a major city and itâ€™s population stands at only 5,000 people. So it certainly meets the criteria of a rural town. And if I can play into stereotypes for a moment, a rural town isnâ€™t necessarily always welcoming of the gay community. So to see this particular rural town take that stereotype and say that not only is it not true, weâ€™re going to throw you an epic four-day party to prove it, is just so unique.

Even though itâ€™s only six years old, the town of Jasper has certainly welcomed the idea of celebrating Pride. Upon driving into down, youâ€™re immediately greeted with 30+ pride flags that are hung from the lampposts on the townâ€™s main street. If you werenâ€™t sure if you were going to feel welcome, those flags quickly and easily melted away any of your fears. And itâ€™s not just the flags, which is easily the most recognizable symbol of equality. Many of Jasperâ€™s storefronts were decorated to celebrate Pride as well, something Iâ€™ve never seen in cities like Calgary. (Thatâ€™s not a dig at Calgary, but a note that we should push for more of it in Calgary.) More than two-dozen stores decorated their storefronts in the rainbow theme. Some painted messages of celebration, others used colourful boas to mark the weekend. But I loved the stores that got a little more creative. Some of the stores used their own products like jackets, beer or water bottles to make the rainbow colours. That gesture meant more to me than those stores probably will ever even know. 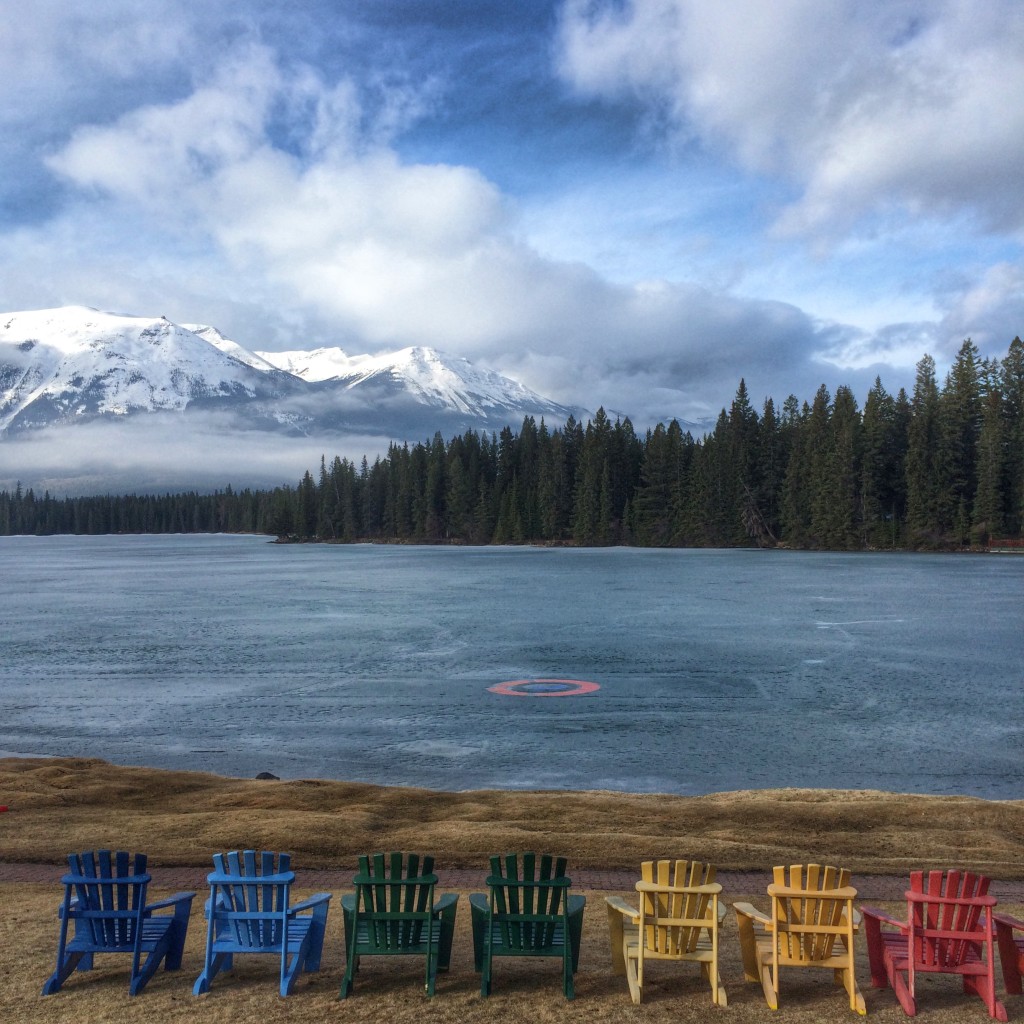 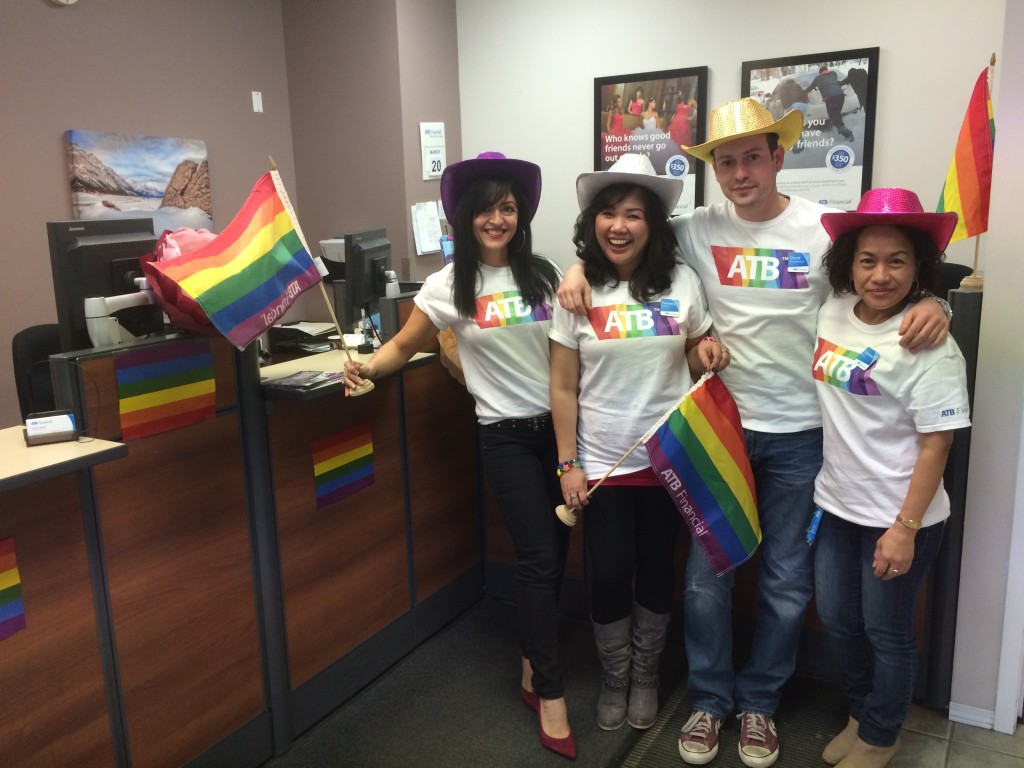 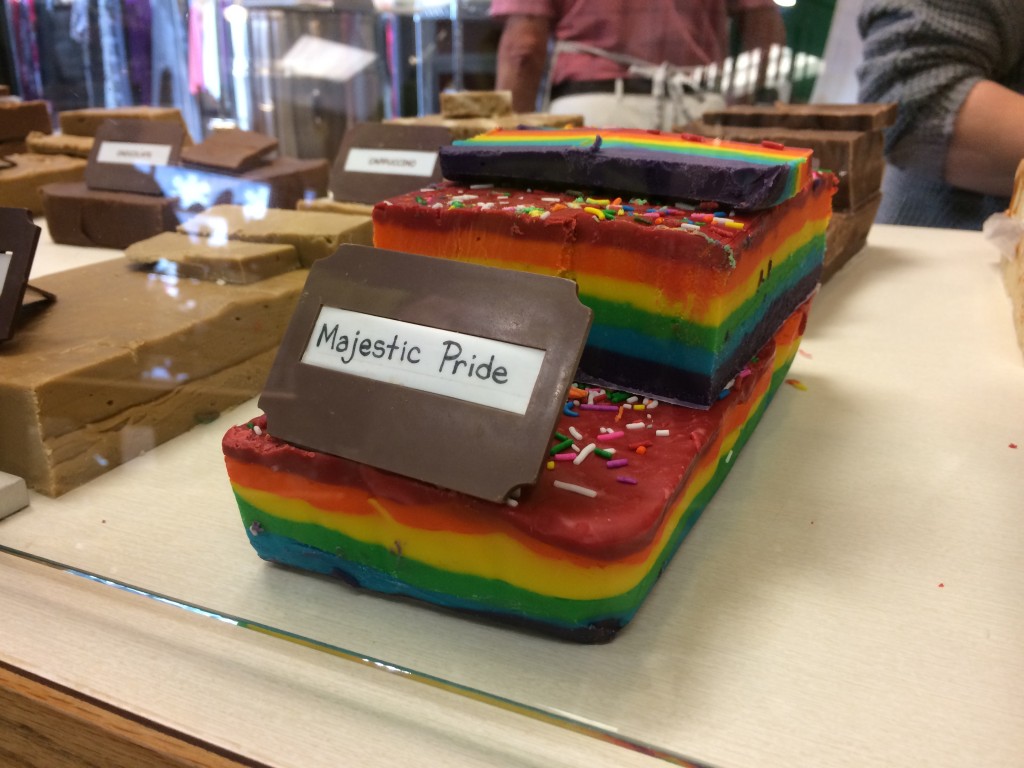 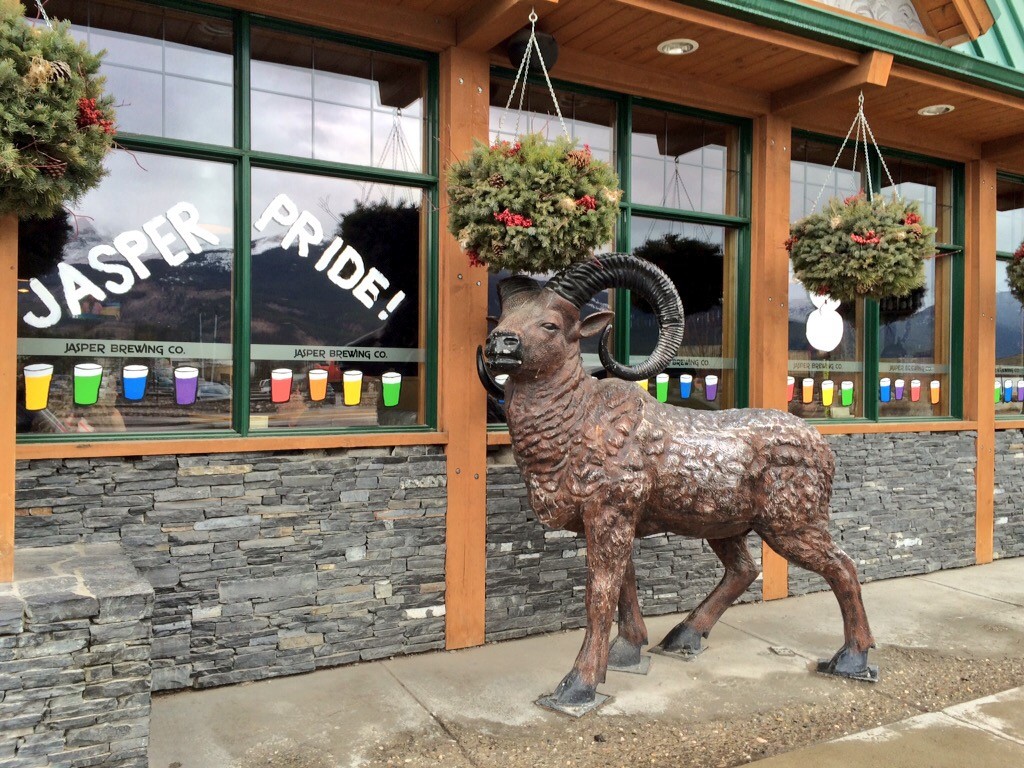 In terms of the events of the weekend, there really was something for everyone. Which I think is the point of a Pride celebration. Like every type of person, itâ€™s not like gay people all like doing the same things, that would be ridiculous. What I think I loved most about Jasper Pride was being able to go on some amazing adventuring like icewalk tour in Maligne Canyon or skiing at Marmot Basin.

If I could talk about the skiing at Marmot Basin for a moment, and why canâ€™t I, the blog has my name on it. It was the third day of Pride and a bunch of us had gathered together for a day of skiing and games. To kick off the day, we all skied down the same run. It was a Pride Parade of sorts, but down a ski hill. A totally Jasper way of celebrating Pride. After the â€œparadeâ€, I wanted to get some more runs in, so off I went. I had tucked a rainbow flag into my helmet and didnâ€™t think of it again. Since I was skiing by myself (I LOVE SKIING BY MYSELF), Iâ€™d often hop on the chair with a few strangers. By the end of the ride up the hill, those strangers quickly became friends. Now Iâ€™m not one who normally talks to the people on the chairlift, I realize how anti-social this paragraph is making me sound, but I just like to give people their space and not feel like they have to talk to me because Iâ€™m alone. But each and every person I shared the chair with asked me about Pride, because I was wearing the flag on my helmet. And the great thing about skiing is that so many people do it, youâ€™ll end up talking to a wide range of people. So over ten rides up the chairlift, every single person talked to me about the weekendâ€™s celebrations. Some asked why they even needed to do it (again, not in a negative way), others wanted to talk more about the politics of Pride and others said they too were from rural towns and jealously wished their town would do something like Jasper Pride. I also talked to one couple who, again remember the chairlift ride is only like five minutes, wanted to talk to me about their gay son. Or at least they think he is gay, which they are totally fine with. They asked me for advice on how to make sure their son knew he was living in a gay-friendly home, without alienating him or shining a light on it. Wow. What a conversation to have with the Rocky Mountains in the background. We chatted and I shared â€œwhat I would doâ€ and then our chairlift ride was done. We didnâ€™t exchange names, we didnâ€™t see each other again, but I donâ€™t think Iâ€™ll ever forget that quick conversation. Which brings me to another reason why itâ€™s good that Jasper has Pride and thatâ€™s because it creates conversation. I had more insightful conversations about the idea of pride on that chairlift than I had perhaps I had in my whole life. If nothing else, a whole bunch of people, including me, came away from that weekend with lots to think about. 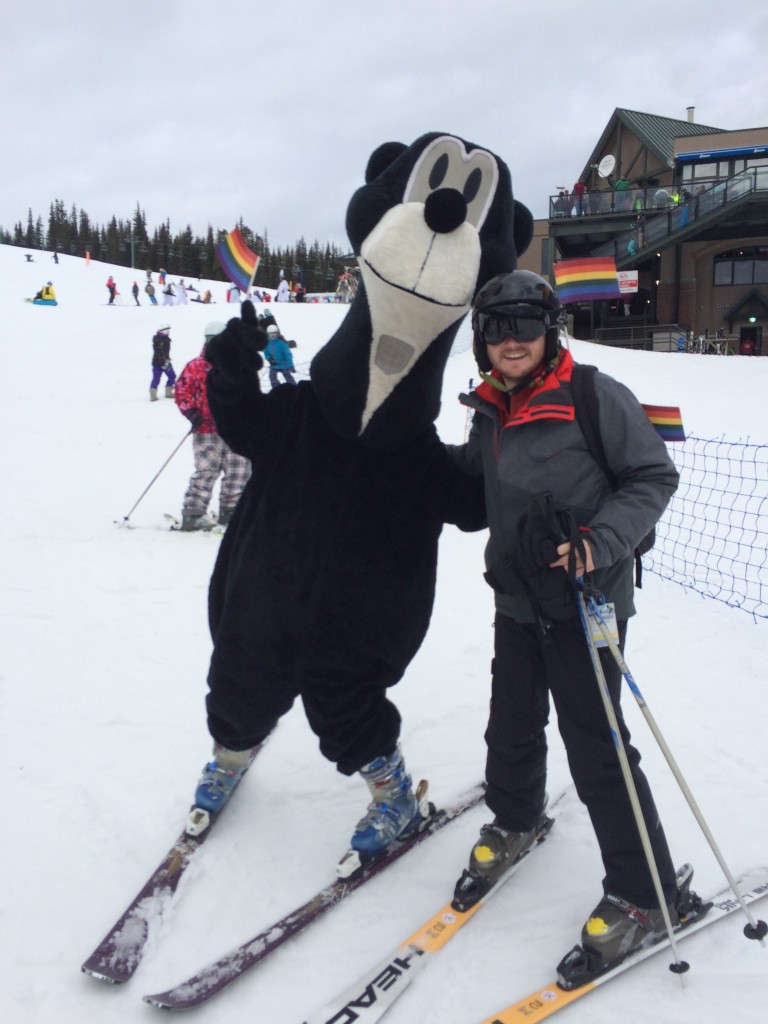 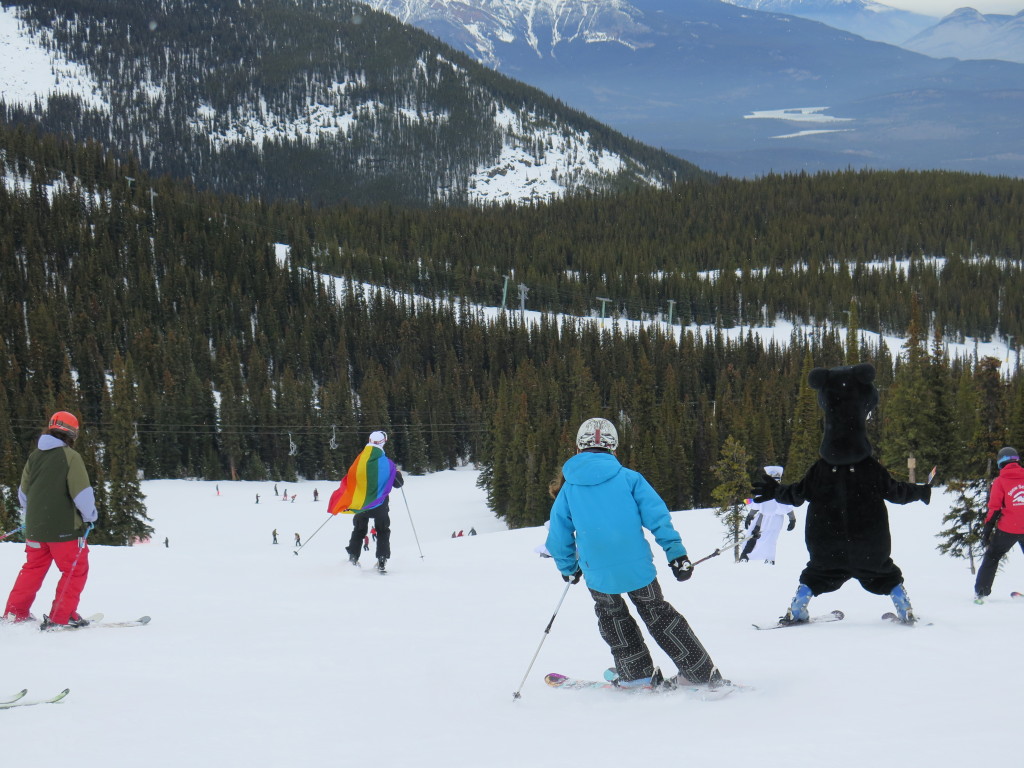 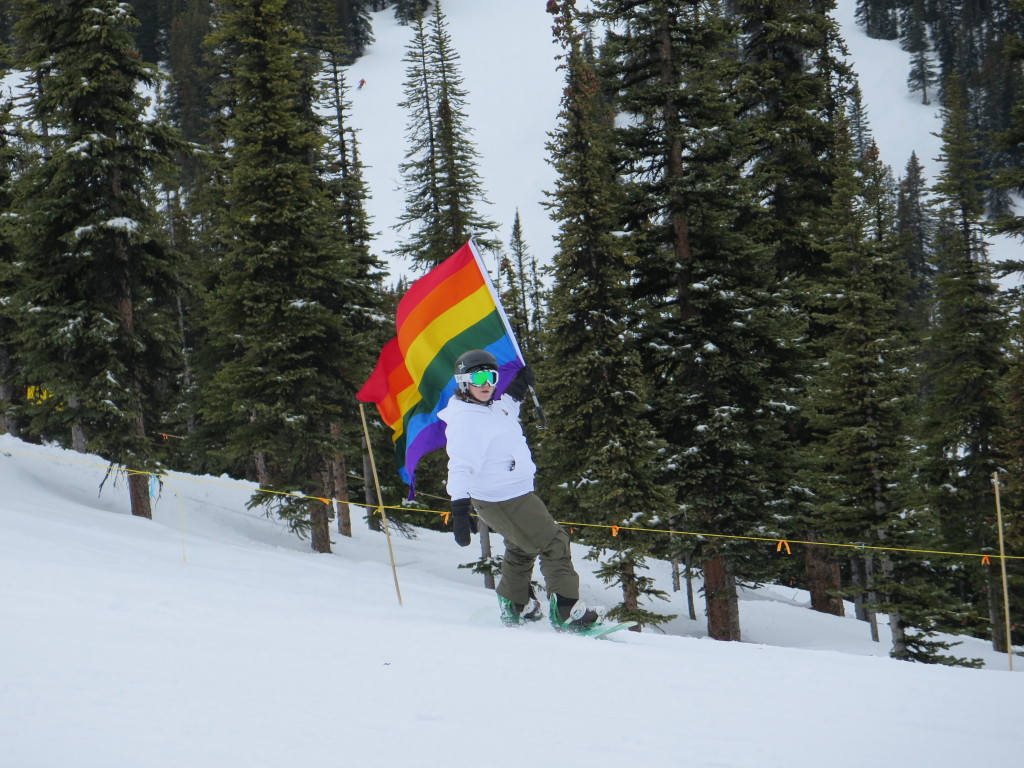 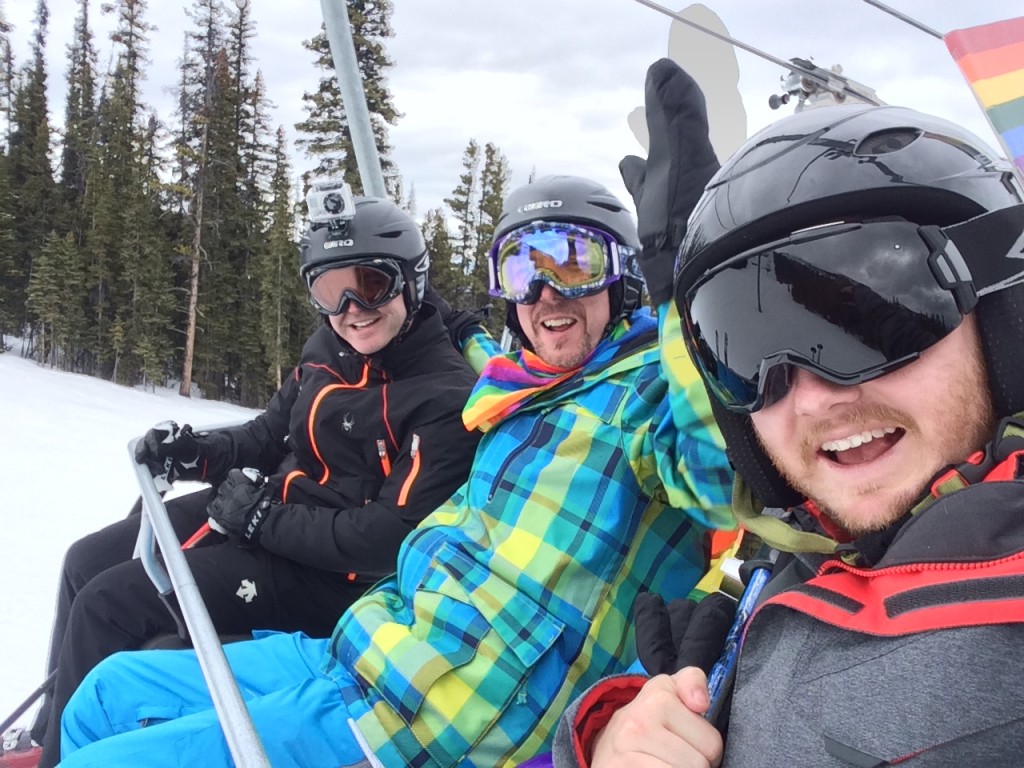 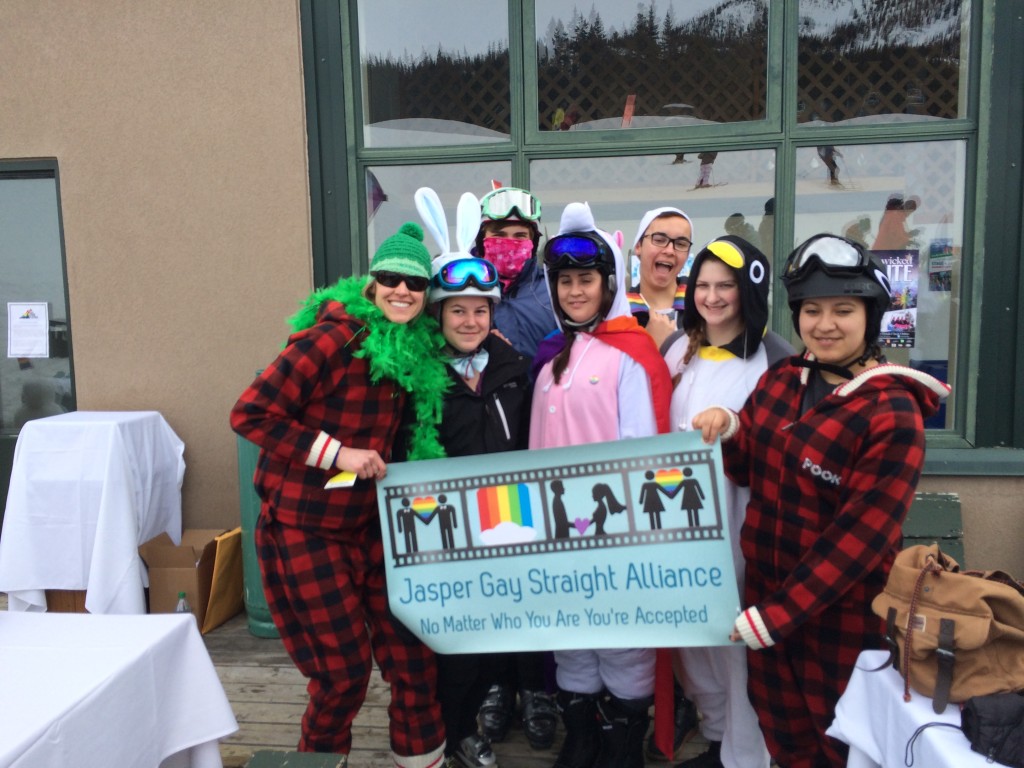 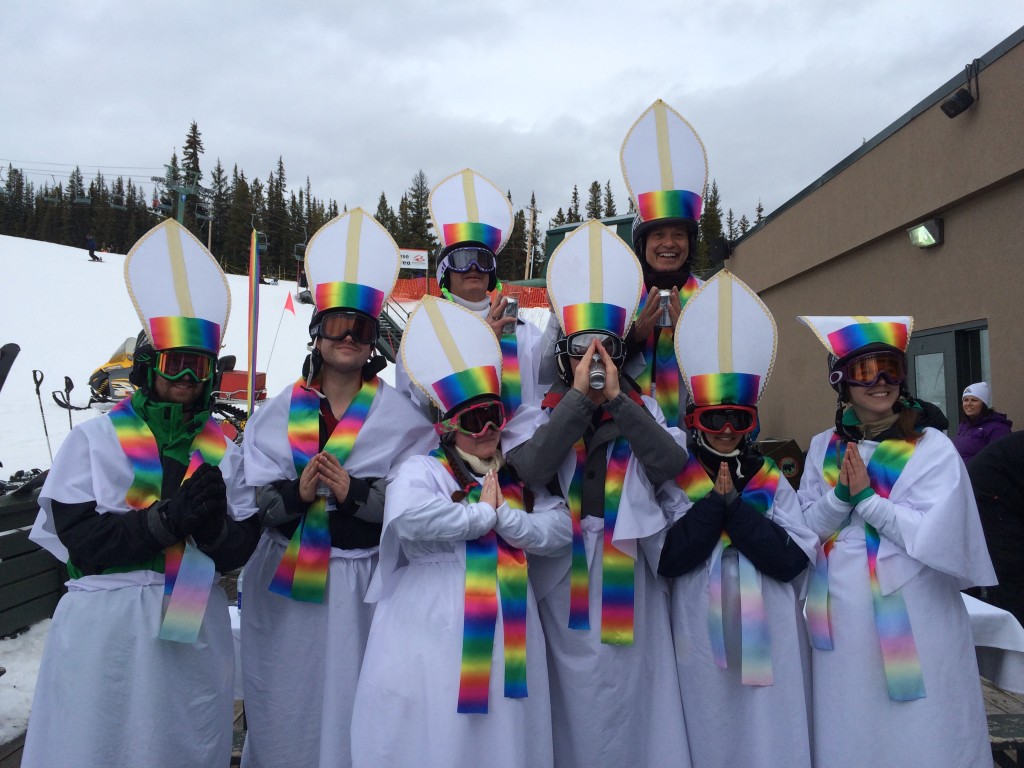 The Maligne Canyon Icewalk Tour was equally as interesting because it included about twenty or people who were in Jasper to celebrate Pride, which meant for the most part that they identified as LGTBQ. Going on an adventure together felt thrilling, not only because climbing down a canyon covered in ice is thrilling, but also it was nice to talk to people whoâ€™ve gone through or are going similar experiences. Iâ€™m not saying it was like therapy or anything like that, I just mean that you could talk about whatever you wanted to talk about without judgment or darting eyes. I canâ€™t tell you how meaningful that is. And since everyone that came to Pride came with different lives and experiences, it was nice to all be together, between walls of ice, just having a good time. 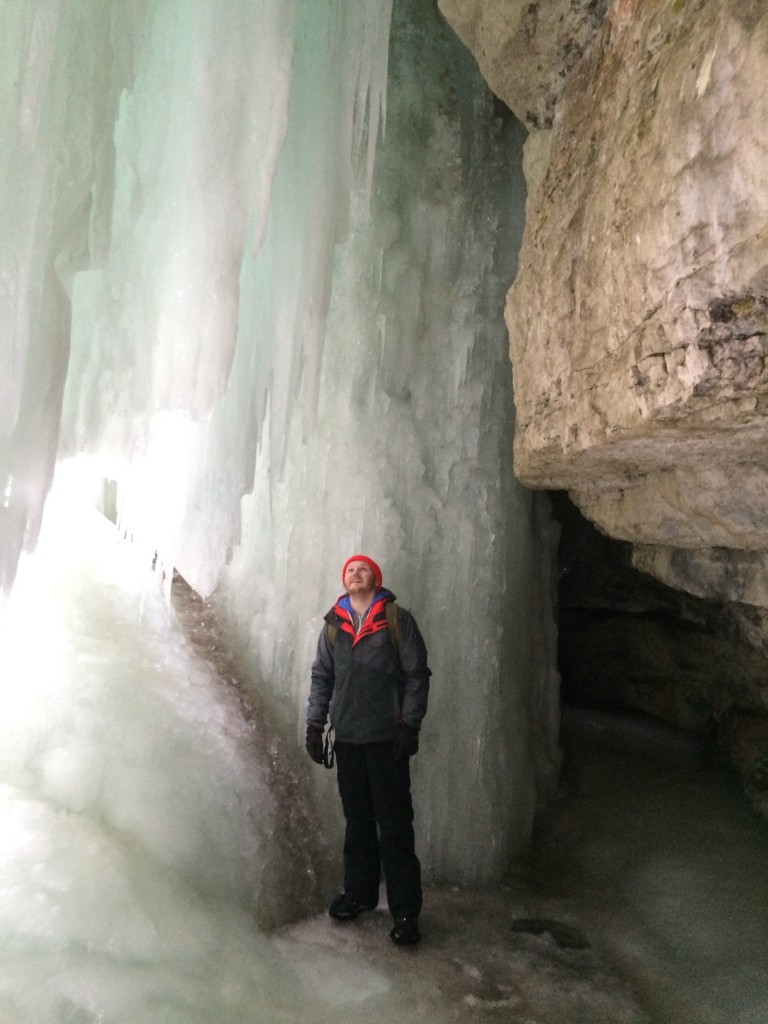 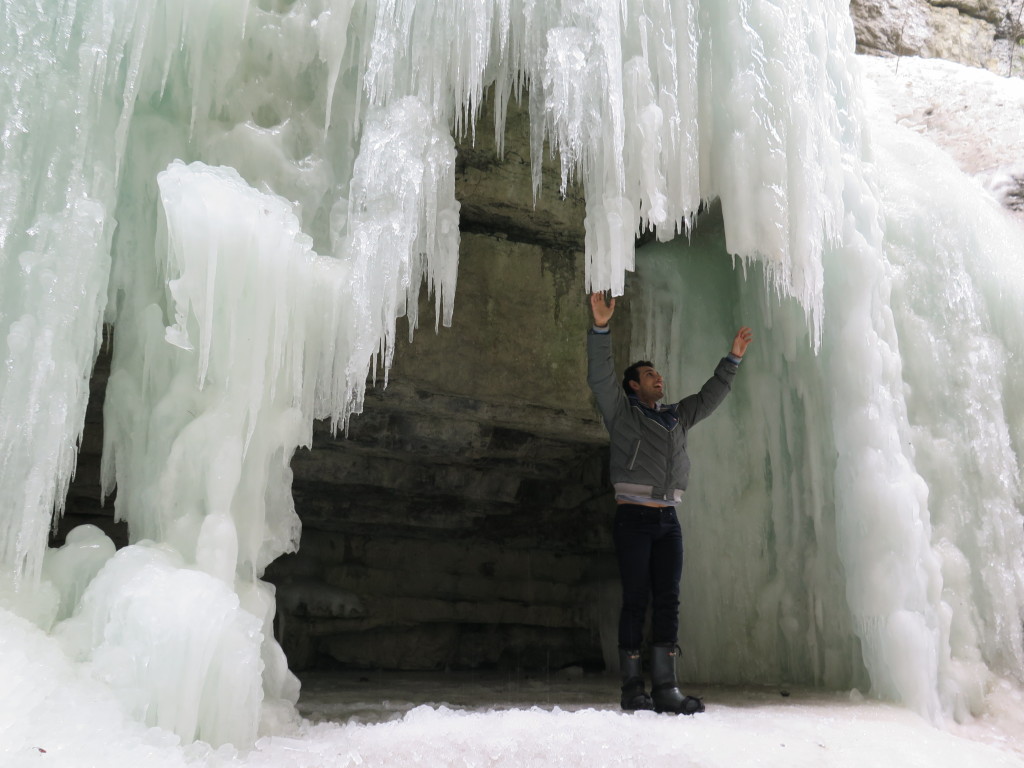 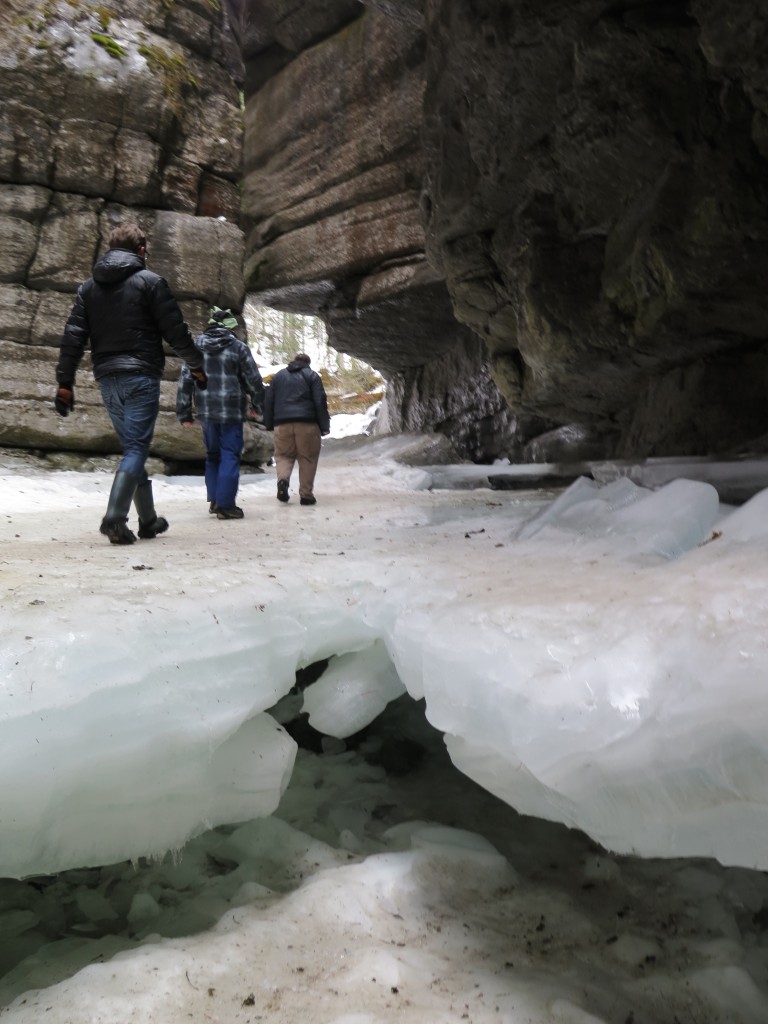 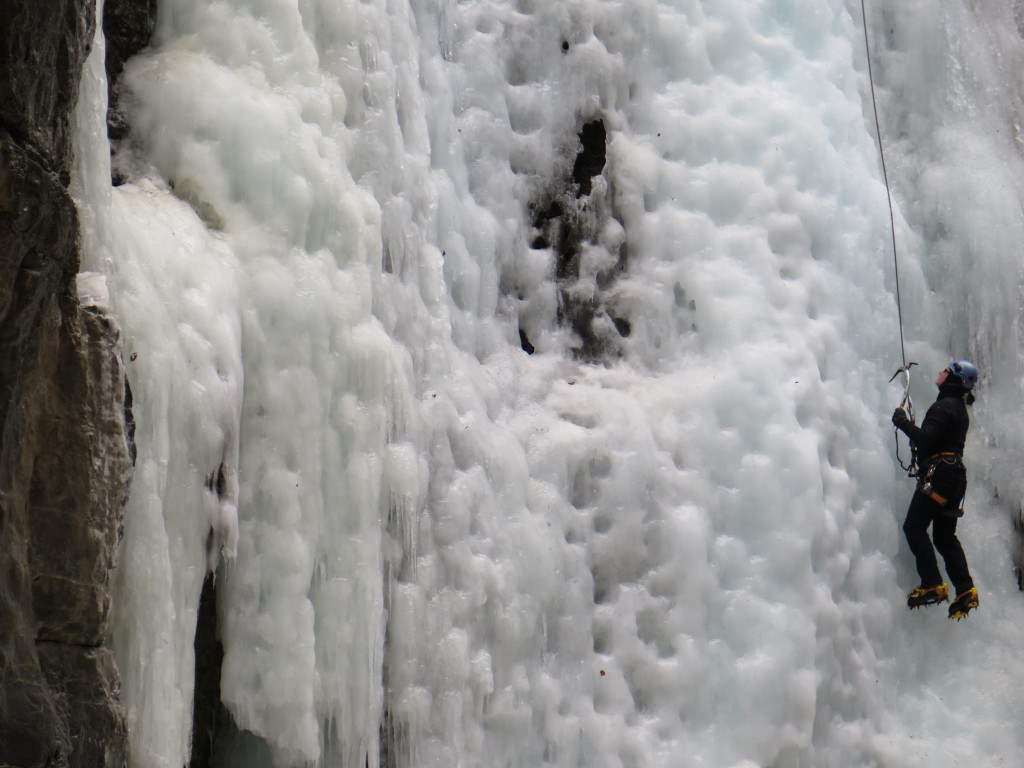 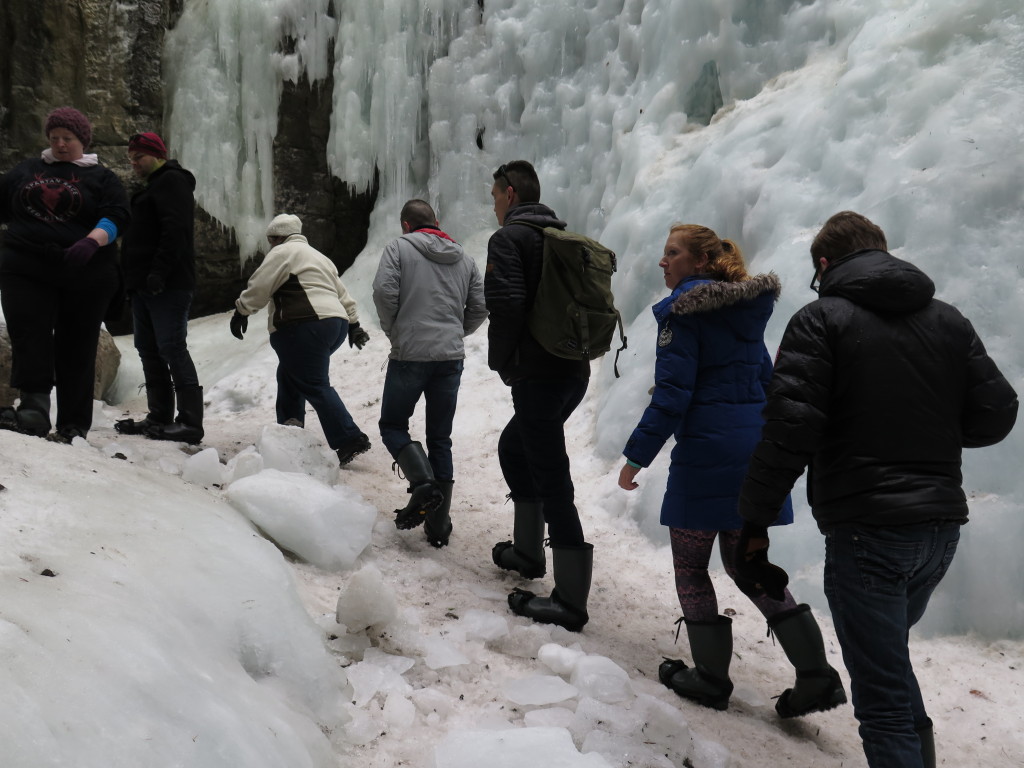 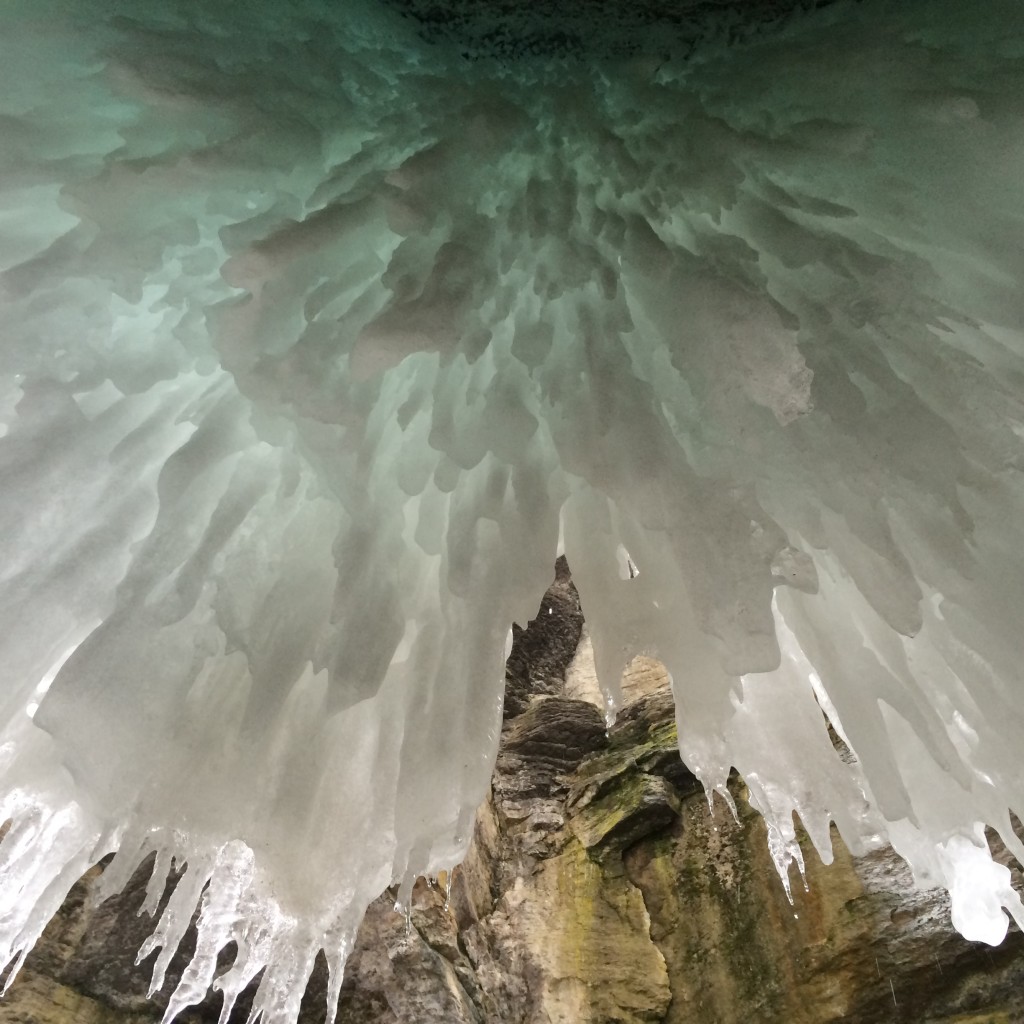 Besides the outdoors experiences, there was also lots of things happening throughout the town. The Jasper Brewing Company launched a special beer just for that weekend, which is really incredible when you think about it. Equally incredible was the Fairmont Jasper Park Lodge, which hosted an epic white-themed party, attended by more than 600 people. To see a big brand like the Fairmont get behind something like Jasper Pride is especially amazing.

Last night, the quiet mountain town of Jasper hosted one of the coolest parties I have ever seen! #JasperPride pic.twitter.com/g0VWQVDdgA

And thatâ€™s the other thing. There is definitely a tourism aspect to Jasper Pride. Itâ€™s not just about celebrating equality and human rights. The town of Jasper depends heavily on tourism, so hosting a celebration that shows the world the LGTBQ community is welcome benefits the town of Jasper. Itâ€™s something that the town is investing in, both emotionally and financially. And good on them for it.

Heading into Jasper Pride, I knew Iâ€™d have a good time. Anytime of the year, itâ€™s pretty much impossible to not have a good time in Jasper. But to leave Jasper after an incredible four days, with new friends and a new sense of respect for this rural town, thatâ€™s something I didnâ€™t expect. Iâ€™ll always feel safe and welcome in Jasper and thatâ€™s why they celebrate Pride.