Who Wants to be in a Zombie Flashmob?! 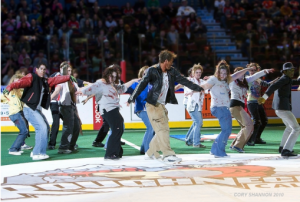 I’m not going to lie to you, I HATE Halloween.Â  But a Halloween themed flash-mob?Â  Now that’s something I can get behind!

Thrill the World, an annual worldwide simultaneous dance of Michael Jackson’s ‘Thriller’, will be held October 23rd, 2010 in Calgary at precisely 5:00 pm at Stephen Avenue Mall, at 8th Ave SW and Center St SW. (Registration starts at 3pm)Â  At the exact same second, thousands of other dancers in hundreds of cities around the globe will also perform the iconic routine, in an attempt to break the World Record for ‘Largest Simultaneous Thriller Dance’.

Seriously?Â  This is already a record?Â  Apparatanly, last year over 22,000 people took part in the event, spanning 33 cities.

The CalgaryÂ flash mobÂ is open to everyone, irrelevant of dance ability, and is free of charge.Â  Participants can learn theÂ danceÂ via.Â YouTube tutorials on the Thrill Calgary Website, and are asked to show up for the event in their finest zombie attire.

But it’s not just about dancing around like a zombie. Thrill Calgary is proud to be raising awareness and funds for Wellspring Calgary.