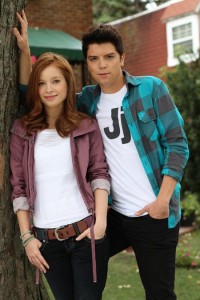 The weirdest thing happened to me today.Â  I woke to a text that read, “We’re going to (Insert Sports Bar Name Here) to watch the hockey game tonight, are you in?”Â  My immediate response was to find like twelve things wrong with sending a text like this to me.Â  Sports bar? Hockey? Game?Â  I wrote back asking for me more details, mainly: Did you mean to send this to me and what hockey game?Â  My friend’s response was, “Yes, Canada VS. US.” What?Â  The Olympics?Â  Already?Â  “World Jrs. Mike, jesus, what’s wrong with you.”Â  Knowing my phone wouldn’t be able to give a detailed answer that would properly answer her question, I thought it be best to just say no and move on.

Another reason why I’m happy to stay home tonight is to watch the return on CBC’s 18 to Life!Â  I know what you’re thinking, “CBC’s what?”Â  Well, my hockey game, is your 18-t0-Life.Â  The second season of the mildly successful show (except on The CW) continues to explore the antics of Tom (Michael Seater) and Jessie (Stacy Farber) as theyÂ  deal with getting married at a very young age.Â  Making things more complicated is the excellent supporting cast who play their families who come from very different worlds.Â  Think Romeo and Juliet without all the teenage suicide and sword fights.Â  Do I absolutely love this show to the same levels as say Degrassi and Being Erica?Â  No, probably not.Â  But it’s enjoyable and if you aren’t trying to live vicariously through 17 year old hockey players, there isn’t really much else on.

Check out Out Is Through‘s interview with the cast of 18-to-Life.

Tonight is also the premiere of Village on A Diet. A ten-part documentary series that sees a small village in British Columbia challenge themselves to lose literally a ton of weight in only three months.