Who is Kelly’s next co-host?

If you are a radio DJ and you are a male, then you better listen up. If you aren’t, then you can keep reading too but only if you are a good enough person to be okay with letting someone else win something.Â  I’m not.

Regis of Regis and Kelly fame is taking a week off and instead of calling in Anderson Cooper or Jeff Probst, LIVE is looking for male radio personality to fill in for the Reeg!

I’m not sure if they’ve done this for the guys before but they did it for the girls last year and Tamara Taggart from CTV Vancouver was lucky enough to co-host with Regis for an entire day! 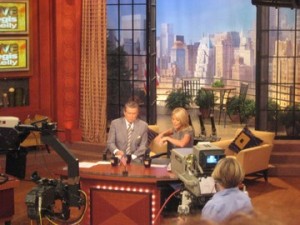 So here’s the deal. If you want to nominate someone, you can do it from now until December 10th.Â  According to the rules, after nominations close, 10 nominees will be chosen from among all nominations received and will be announced on-air on or about Monday, January 10, 2011. Viewers will be given the opportunity to vote on-line for 5 nominees who would co-host with Kelly Ripa!

I know guys from all over Canada will be going after this, so the competition should get interesting.Â  I’ve already gotten a couple of emails from some DJs here in Calgary who think they have what it takes!

Who would you want to co-host with Kelly?