Who are you: Thea Andrews 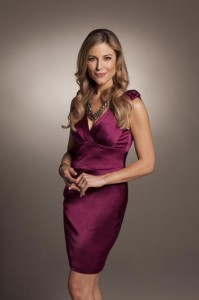 With Being Erica and Lost Girl both off for the summer, I’ve decided that I need a new Canada TV crush*.Â  I’ve been flipping through the channels for the past few days and while Sandy Rinaldo will always do it for me, I am seriously intrigued by the new host of Top Chef Canada, Thea Andrews.

To be honest, I’m not sure if I’ve ever seen her before on TV but there is something intriguing about the way she hosts the show.

Before the show premiered, I had actually never seen an episode of it’s American counterpart.Â  But there was so much interest, especially with two Calgarians in the mix, that I couldn’t pass it up.Â  I know a lot of people were turned off by, perhaps the most product placement I’d ever seen on a show, but for me, all eyes were on Thea Andrews.Â  But don’t call security, I’m not talking about a crazy stalking kinda stare.Â  I just mean that I was really intrigued.

I really enjoyed how she seem to play the perfect middle(wo)man between the judges and aspiring chefs.Â  I also loved how there was just a little “fuck yeah” in her eyes every time she revealed another twist in the competition.

There are some networks, that shall remain nameless, that seem to want their hosts to act, talk, look and feel (see: plastic) the exact same way, but so far Thea seems to have risen above that with the safety of the Food Network.

Side note:Â  I’m reserving full Canadian TV crush-dom to see how many times she says, “Let’s move on to…..” on the next episode of Top Chef Canada. In the first episode, it came dangerously close to Drinking Game creation.

*when I say crush, I actually mean best friend.Â  It would be silly to have a crush on a TV personality, but pretending that we could be best friends is totally normal