Where you can see Canada’s Oscar nominated film! 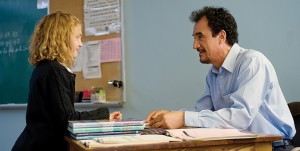 A few days ago, a small Canadian film got a lot of attention, when it nabbed one of the coveted Best Foreign picture film nominations at this year’s Oscars.   Monsieur Lazhar was directed by acclaimed director Philippe Falardeau. The movie tells the story of Bachir Lazhar, an Algerian immigrant, who is hired to replace an elementary school teacher who died tragically. While the class goes through a long healing process, nobody in the school is aware of Bachir’s painful former life

So if you’re like me, and you happen to enjoy movies, you’re probably wondering where you can see this small but acclaimed movie.  Well, it isn’t on DVD yet, but it is still playing in some theatres across the country, although won’t likely ever receive a full across country rollout.  I decided to do a little investigating and see where in Canada you can see the movie RIGHT NOW.  I’m guessing, as Oscar night gets closer and closer, the film hopefully might start to pop up all over the country, but for now, here’s what I found, as of Friday, January 27th:

Happy viewing, make sure you report back and tell me if it’s worth the effort to see it…although I’m sure it is.