What’s so wrong with the G20 Protesters?! 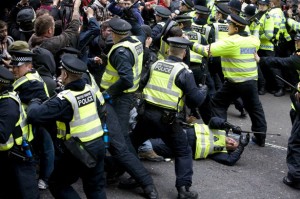 When the G20 starts this week in Toronto, some of the most passionate, disruptive and dangerous people in the world will also be gathering in Canadaâ€™s biggest city.Â  No, not Blue Jay or Leafs fans, Iâ€™m obviously talking about the protestors, not delusional sports fanatics.

Security has easily become the biggest expense of the international conference. By now youâ€™ve probably seen or heard all about the 8-foot tall fence that surrounds the downtown core. Costing the city millions of dollars, the protestors have proven themselves as dangerous group that often commands such security. While Iâ€™ll never stand why our worldâ€™s leaders canâ€™t just talk over skype like the rest of us, the city seems prepared for what will be a very tumultuous few days.

So what about the protestors?Â  I donâ€™t know about you, but I wouldnâ€™t mind if we kept them around a little longer.Â  Sure they can be disruptive, unruly and dangerously aggressive, but since we are Canadians, why not get them to stick around and do some of the stuff we are way to nice to do ourselves?Â  Afterall, most of the protestors have traveled from all over the world, the least we could do is keep them busy.

So what do you do with a group as energetic and proactive as the G20 protestors?Â  Here are some ideas: