What’s it like to be a Google Street View trekker...

Okay, maybe I’m getting ahead of myself.

If you were along Calgary’s bike paths last week, you may have spotted me biking alone (on an adult tricycle no less) with a giant alien-looking thing on my back. Well, that was actually Google’s Street View Trekker. What is it? Well, you know how Google Street view has a car that drives around taking shots of streets all around the world. Well, this works the same way, but it allows you to capture photos in places where cars can’t go, like Calgary’s bike paths.

Travel Alberta has partnered with Google to bring Google Trekker to hiking trails and remote locations around the province. The Trekker will be travelling to places never captured before across Alberta late August and September, documenting each location to allow virtual access to Alberta’s breathtaking landscapes and authentic experiences through Google Maps. 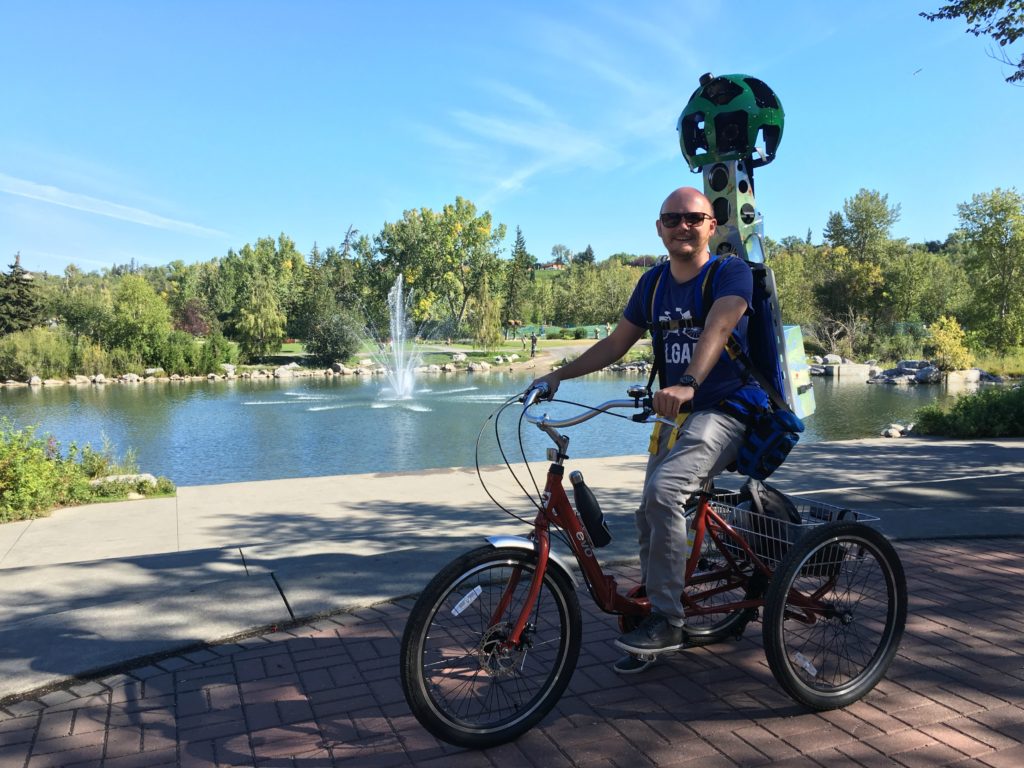 I was lucky enough to be hired by Travel Alberta to take the Trekker on some of Calgary’s bike paths. Since Calgary has North America’s largest bike network, doing the whole path would take a while, and I only had a day. So I covered the Bow River path from Edworthy Park to the Inglewood Bird Sanctuary.

The device itself is quite impressive. It’s a 40 lbs backpack equipped with 15 cameras that captures 360 degree images every 2-3 seconds. Because the machine is so heavy, I wasn’t able to use a regular bike, because it would have been practically impossible to keep balanced. So, I rented an adult tricycle at Eau Claire Rapid Rent Eau Claire Rapid Rent

It took me about six hours to cover the whole terrain, and every second of the experience was cool. First things first, I got a taste of celebrity because every where I went, people asked questions about it. I wasn’t able to answer too many, because I was afriad if I stopped, it would take me forever to get started again. So sometimes people would bike beside me and asked questions, and if I did stop, people would take photos of the Trekker. Actually, I got a taste of what it would be like to be a celebrity’s assistant, because the Trekker was definitely a star. 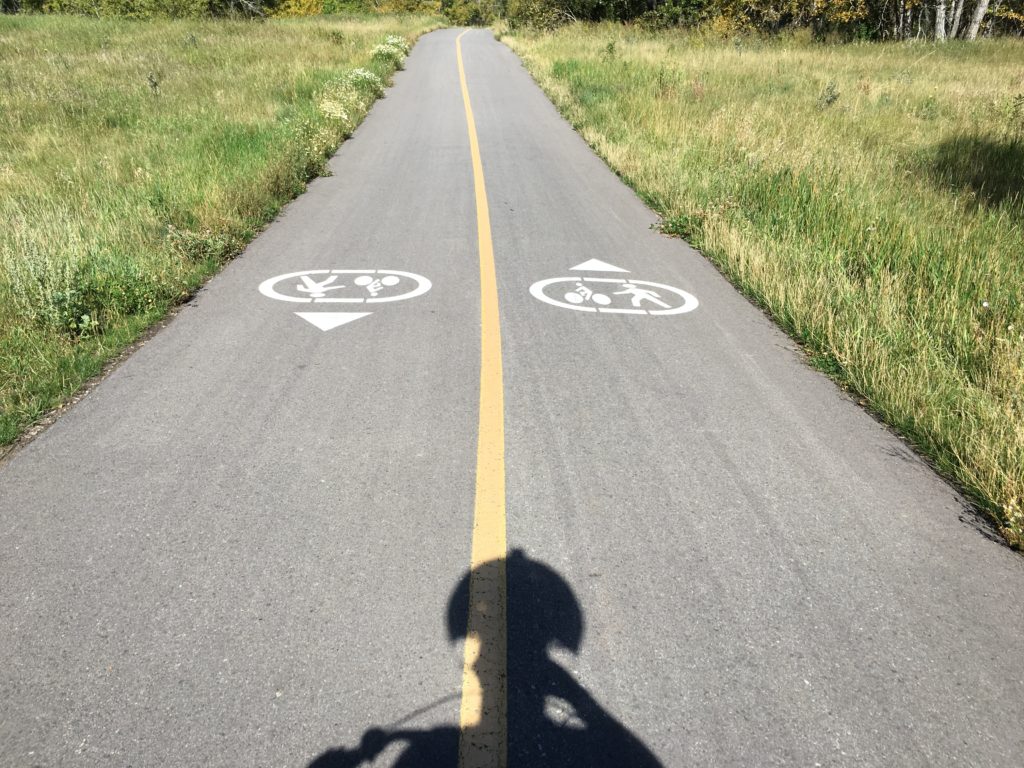 The experience also felt incredibly important. Because until the next time someone takes the Trekker out on the paths, these photos will be the ones that represent Calgary’s bike pathways. As far as I can tell, this will also be the first time Google Maps will cover things like Prince’s Island Park, St. Patrick’s Island and the Peace Bridge. The photos will be on Google maps around December, and I cannot wait to see what it captured.

We saw @mikesbloggity with the @googlemaps bike camera riding across the Peace Bridge. 😊 pic.twitter.com/ImIV7oZx2K

It allowed me to see the bike paths from a different perspective, because instead of looking ahead, I was thinking about what the camera was capturing, because with 15 cameras, it was seeing more than I was. Some of the things I think it captured were family bike rides, the beautiful Bow River, ospreys, kids playing, segway tours and so many of the things I love about Calgary. One thing I know for sure it captured was a lot of people playing Pokemon Go. My tour caused me to bike through Prince’s Island Park a few times, a place well-known for its multitude of PokemonGo players. As a biked through them, I heard a couple of people say that they thought I had created the ultimate PokemonGo machine, as if the thing on my back was somehow able to capture all the Pokemon at once. Which, I’ll admit, would be pretty cool. 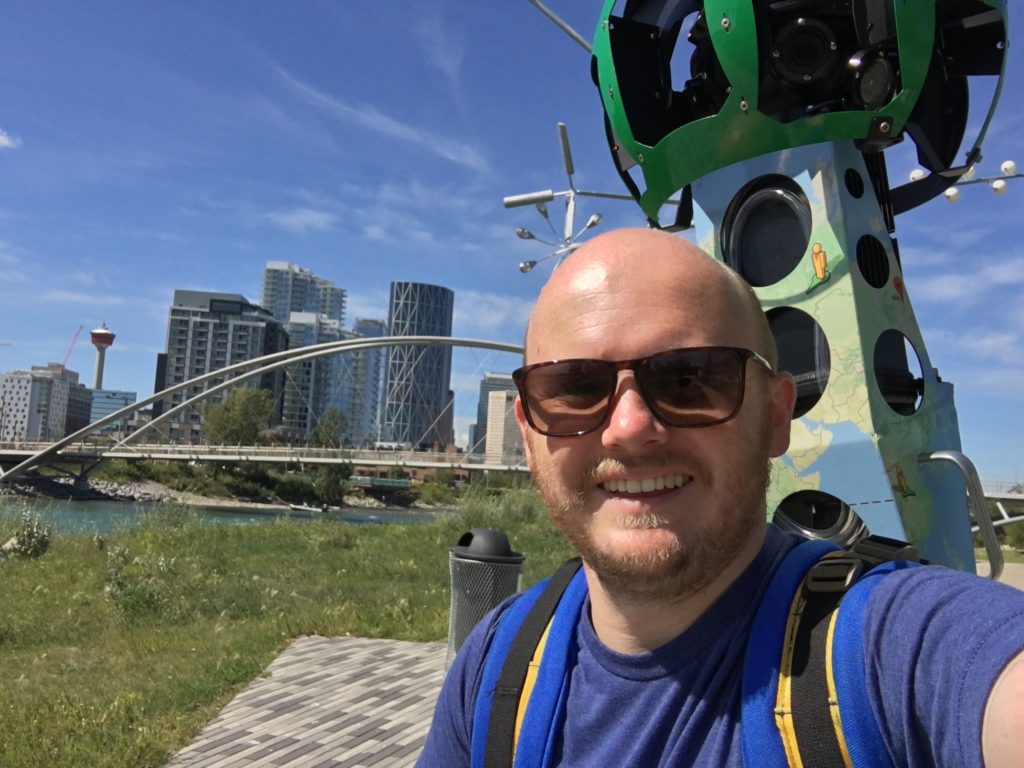 This isn’t Google Trekkers first time in Alberta. Did you know you can check out some of the province’s best ski hills using Google Street view? Check it out.

I handed the Google Trekker off to Jeff Bartlett , who is taking it on some hikes in and around Canmore this week. How is he hiking with a 40 pound camera on his back? I have no idea. But I can’t wait to see the photos.