What it’s like to apply for the Amazing Race Canada

Ever since the news that Canada was going to have its own Amazing Race, I’ve been obsessed with getting on the show. I’ve never missed an episode of either of the American or Canadian editions, and if I’m ever in a situation where I have to run with a backpack, I pretend I’m on the show. That’s true. You can ask anyone I’ve ever traveled with. If I’m ever presented with a challenge where I have to find something, you can pretty much guarantee that I’m going to say “This is just like the Amazing Race.”

So when casting for the show was first announced, I immediately asked my dad. Â We live in different cities, he’s traveled the world, he’s a cancer survivor and we’d be good TV. Â I don’t bother saying we’d be a good team and win all the challenges, because producers are looking for good teams, not the next Olympian. Â So our first video sucked, and we never heard back. The second year we applied and heard back. They were interested and we filled out a secondary application. And then we never heard back. Â The exact same thing happened the third season.

My dad encountered some health issues, so like any good reality contestant, I realized that this alliance wasn’t going to work, so I made a new one with Â my best friend Krista. Â She’s fierce, competitive and would make for good TV. After years of never missing an episode of the Amazing Race andÂ The Amazing Race Canada, I thought I had finally found the perfect formula. (My dad is fine BTW.)

To me Krista and I were the perfect team. Lifelong friends from the east coast, but living in Calgary (which would mean bi-coastal viewing parties) gay blogger and amazing teacher and a whole bunch of other stuff. You can watch our audition video below:

And for a little while, the show’s casting department agreed.

At some point we signed something. It was so complicated that I’m not sure even Ally McBeal could make sense of it, so I won’t delve into the details, but let’s just say, I was feeling very hopeful. Like flossing my teeth three times a day hopeful. (Dear CTV lawyers, if I’m saying anything I shouldn’t, just tell me, please don’t sue me.)

And here’s where I try to explain what has been coursing through my brain for years. To say I became obsessed with getting on the show would be an understatement. Â  Even worse, you can’t tell anyone. So I spent days, weeks, months pouring over old shows, studying maps of Canadian cities, picturing how I would disappear for a month to shoot the show, pretending to win, pretending to lose, I scoped out restaurants and bars where I could hold viewing parties, I casually watched the producers on Twitter to see if I could get any intel, I purposely made sure I didn’t say anything negative about any of the shows sponsors, and just generally going insane. Â You know that show Crazy Ex Girlfriend? Â She would write a song about how crazy I was being.

Applying for your dream reality show is honestly a lot like dating. Â In the beginning, you have no idea how to act, but you want the person to think you’re worth choosing. So you try to be funny, but then you wonder if they think you’re trying to be too funny. You try to make yourself look nicer than you normally do, but then you wonder if they liked you for how you looked already. You generally try to act on your best behaviour, but maybe they want someone who’s a bit more sporadic. It’s insane, it’s exhausting, it’s the most thrilling thing in the world. And this is what was going through my brain every minute and every day, for years. I’m not even exaggerating. And the worst part, just like dating, you have to pretend that you’re normal, when you probably are anything but. You have to pretend you haven’t spend hours, days and weeks researching every little detail about them. You have to pretend that you aren’t obsessed. When you are. Just like dating.

Then there was this moment a few seasons ago that I actually printed off and save in the same box as my high school diploma. It’s where the Amazing Race Canada’s show-runner says they chose the start location based on one of my blog posts. 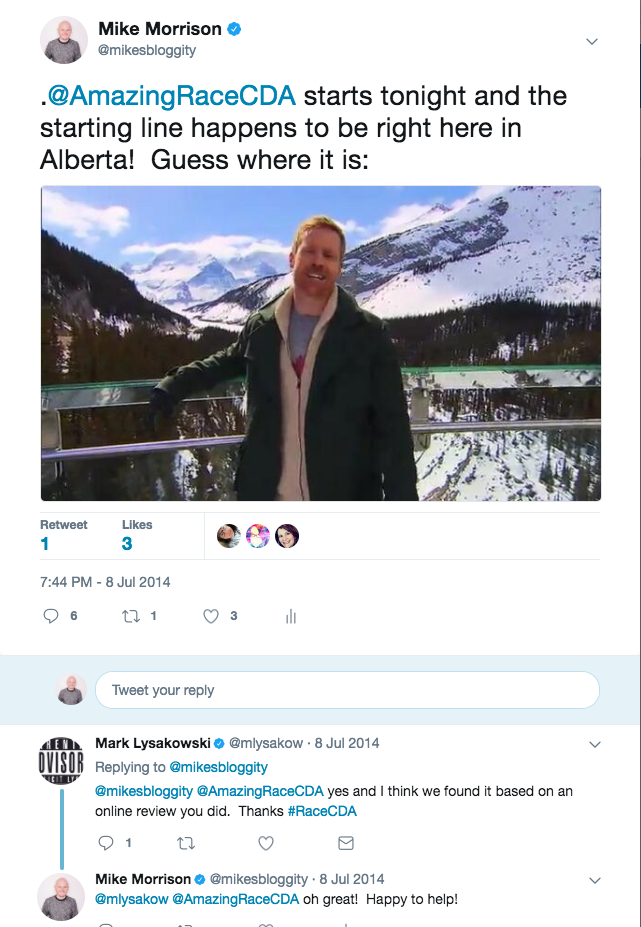 Now, picture all that excitement, anxiousness, history and stress swirling in my brain. And now picture not being able to tell anyone. My partner Krista never thought we’d get on. She knew how important it was to me, so she came along for the ride. But there was a part, near the final days of casting that she said: “Holy shit, I think we’re going to be on the amazing race.” Â By that time, I was basically talking to myself in the corner of a dark room.

As you may have guessed, we did not make the Amazing Race. It’s something that even though it’s been a year and a half, I’m honestly not over. I’m sorta hoping writing this out will finally help me move on. Â To put salt in the wounds, the season we were close to being on was the season they repelled down the Calgary Tower. And actually, I saw them filming that day.

I think it’s some kind of publicity thing. They’ve a helicopter cruising around filming and a Calgary tower mascot. https://t.co/tCTMOXZsuC

And actually, when I say that I’ve never missed an episode of The Amazing Race Canada, I’m lying. I didn’t watch last season. I couldn’t. It’s like watching the love of your life get married to someone else. It was tortuous. It still sorta is. I’m not bitter. I’m just still sad about it.

So knowing how sad I was, Krista said we’d apply for the fifth season. And we did and then you know what happened? Nothing. We didn’t even make it to the second round, we didn’t hear from anyone. And this is where I implore you to feel bad forÂ my poor boyfriend (If you weren’t already.) He thought he was with a 35-year-old man, but I spent weeks pouting and crying like I was a child. I had swiped right on the Amazing Race Canada and the Amazing Race Canada instead just deleted their account.

Today, the Amazing Race Canada started announcing the cast of its fifth season. And I’m definitely not on it. I didn’t even get close. Watching my one big dream slip away has been shitty. (And yes, I know there’s infinitely more important things in the world, but this has been something I’ve thought about for 16 years.) I also know I’m supposed to say that I’m happy for the teams who do get on, but I’m not. I’m jealous. So jealous. But good for them, I guess.

So I’m left with one question: Should IÂ apply for season six? And the answer is simple: Â Hell yeah.

The Amazing Race Canada premieres on CTV on July 4th.Â