When it comes to experiences in Albertaâ€™s mountains, thereâ€™s probably none more iconic than staying at the backcountry lodge. Far away from civilization, the internet and many of lifeâ€™s distractions. Not to mention, you usually need to hike/ski/horseback ride to the lodges, so youâ€™re often to getting to see things that only a few have seen before. Itâ€™s one of those true mountain experiences that you never forget. 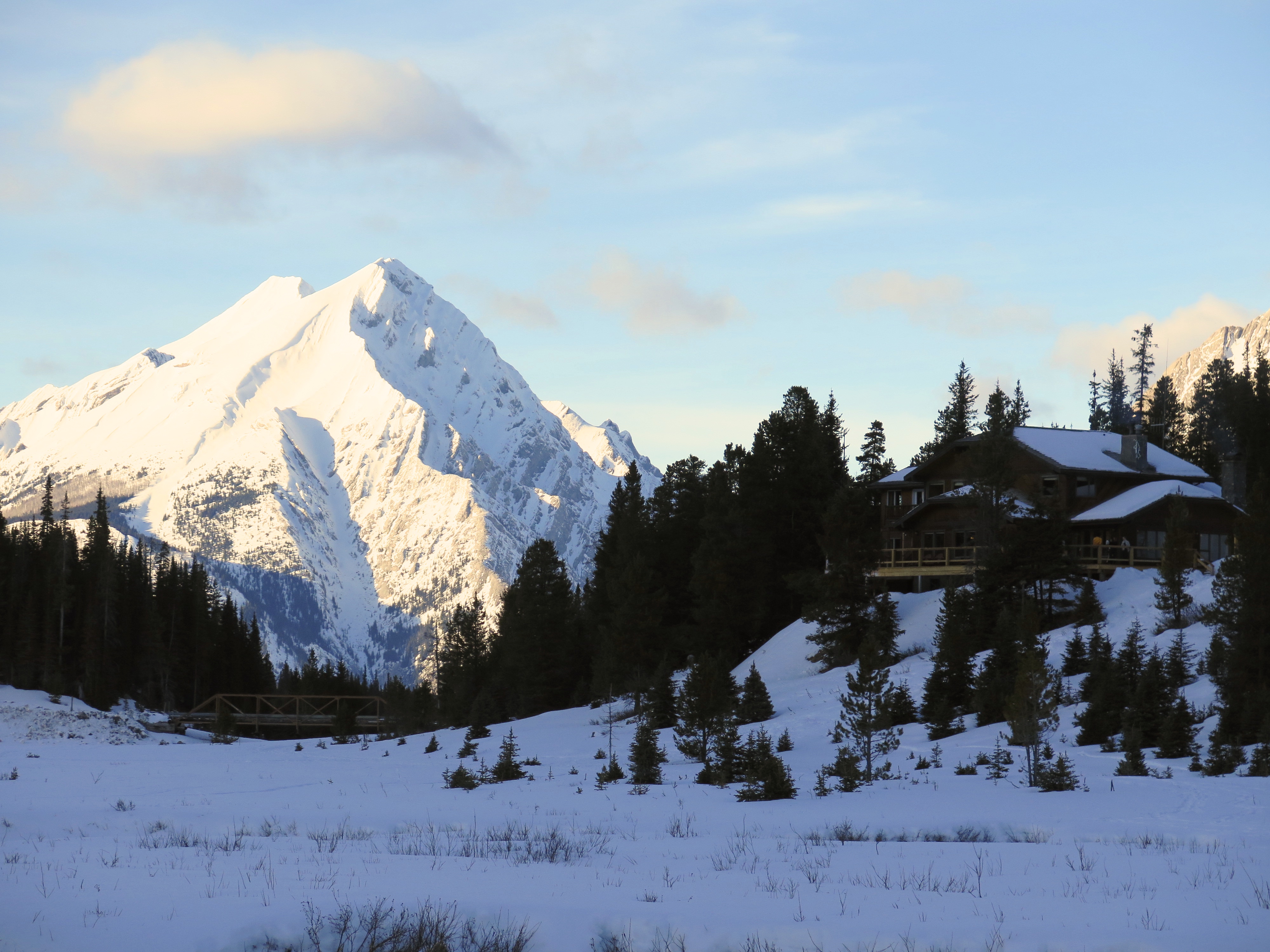 Tucked in about thirty minutes behind Canmore on Smith Dorrien â€“ Spray Trail, Mount Engadine doesnâ€™t have an official tagline, but if it did, it would be: The backcountry lodge you can drive to.

Backcountry diehards would argue that well than itâ€™s not a backcountry lodge, but I would argue back that the lodge off the grid, but has a few modern amenities, so it balances the best of both worlds. And yes, it does have wifi, but the password is â€œGoPlayOutsideâ€ so you donâ€™t feel good using it.

Between its rooms and two chalets, Mount Engadine can accommodate up to the nineteen people. But the lodge happens to be very spacious, so youâ€™ll find lots of space to find your own little nook by one of two fireplaces and relax by reading a book, or, like I did, staring out the huge windows for hours and hours. Because the nearest accommodation is miles and miles away, you really get the sense that youâ€™re out there in the middle of the mountains practically by yourself. The spaciousness of lodge was really great, because while itâ€™s always nice to meet new people, itâ€™s also nice to have your own space and not feel like youâ€™re all on top of each other. Many of the rooms are big enough too, that guests can definitely just hang out there and enjoy the peace and quiet. 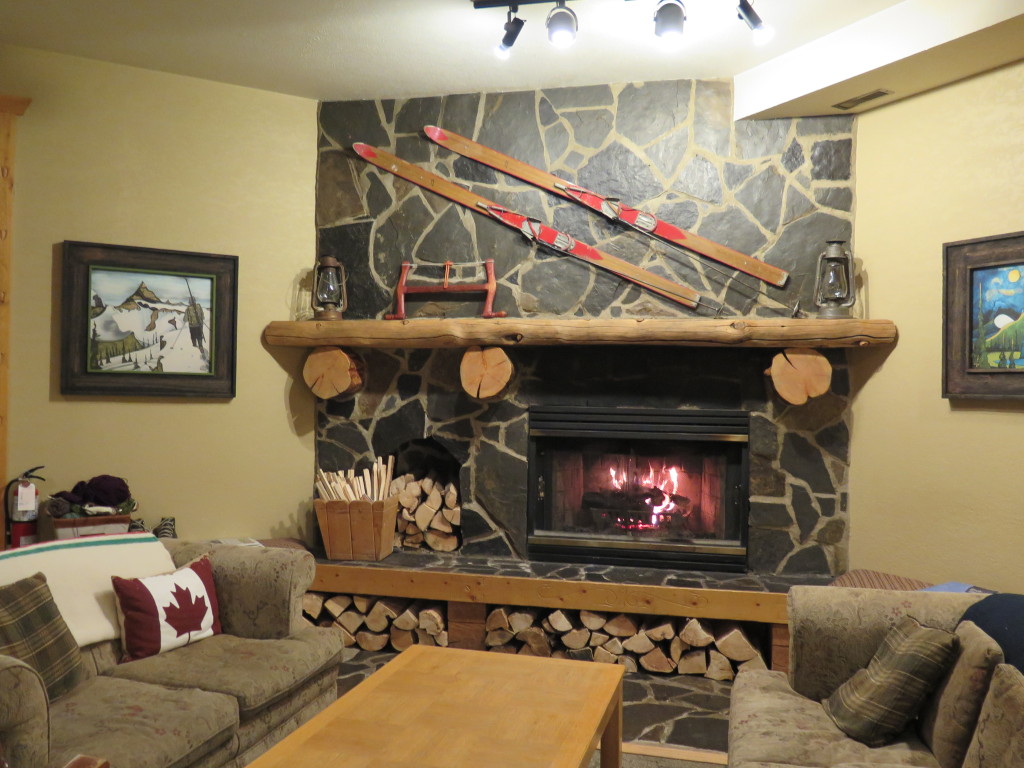 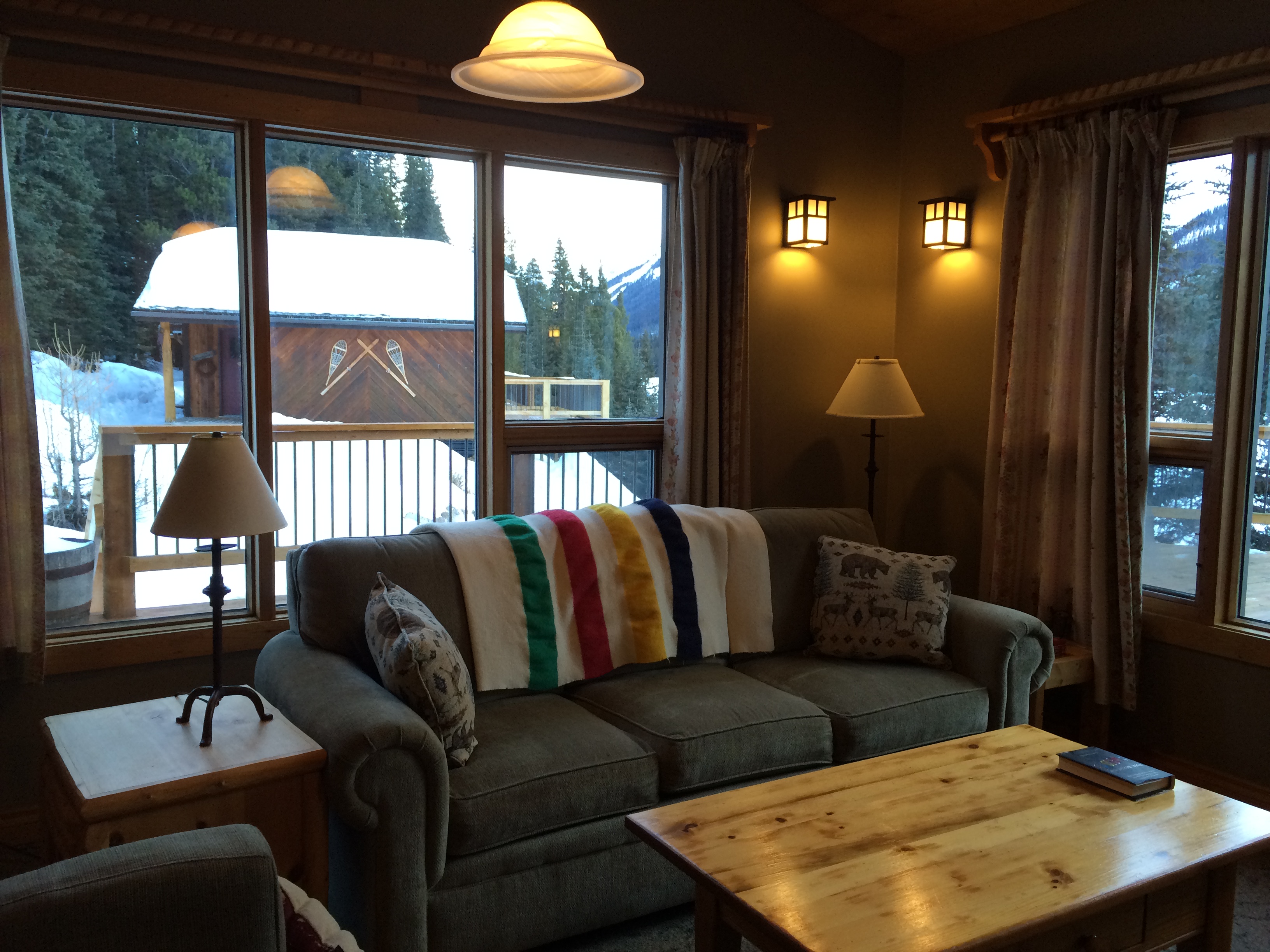 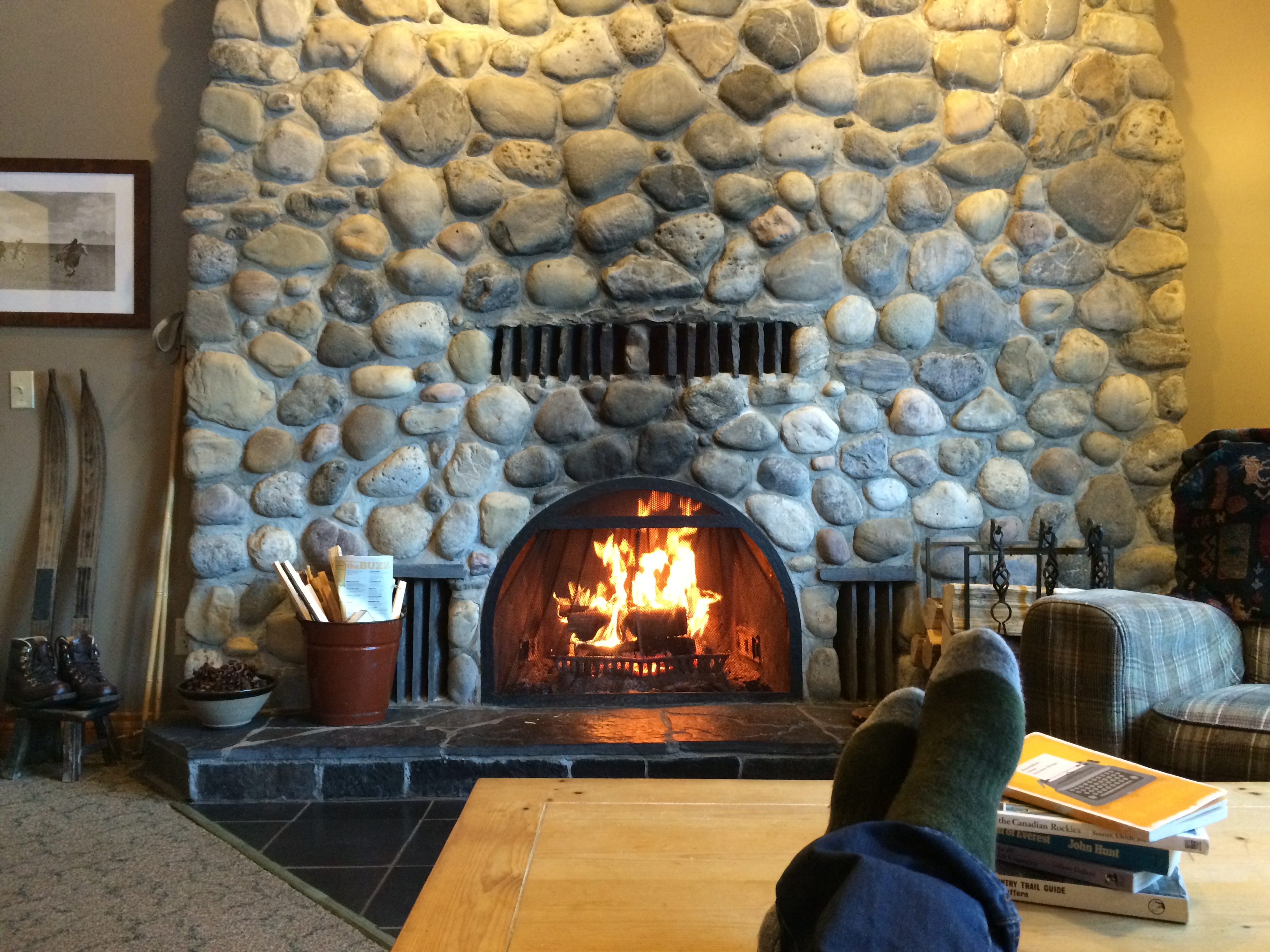 Speaking of the peace and quiet, have you ever been somewhere so quiet, the silence almost felt like noise? Once I checked into the lodge, I quickly grabbed some of the provided snowshoes and headed into the meadow that Mount Engadine Lodge overlooks. The sun was setting and I wanted to watch the sun slowly moved behind the rocky mountains. After a few minutes, I was already far enough away from the lodge that I couldnâ€™t see it anymore and I really started to feel like I was by myself. Like, really, really by myself. How often that does really happen? Itâ€™s nice knowing that thereâ€™s warmth (and food) a few minutes away, but to be really by yourself, with your thoughts, with the mountains, the sun, the snow, all of it. It doesnâ€™t happen often. I kept walking, chasing the setting sun and finally I heard it: Nothing. I know it sounds weird, but hearing nothing actually feels like a noise. I stopped moving and there wasnâ€™t a single sound. Not one. I was dressed warmly enough that I sort of fell back into the snow and just lied there for, actually I donâ€™t know how I long I was there for. It was a while though. Just listening to nothing. It sort of felt like my ears were detoxing. Like maybe for the first time since they started working three decades ago, they got to take a break. I watched the clouds float by. I used my bag as a pillow and watched the sky turn from blue to pink to grey, then the beginnings of darkness. I only eventually got up because I was worried that if someone saw me, theyâ€™d think I had injured myself. 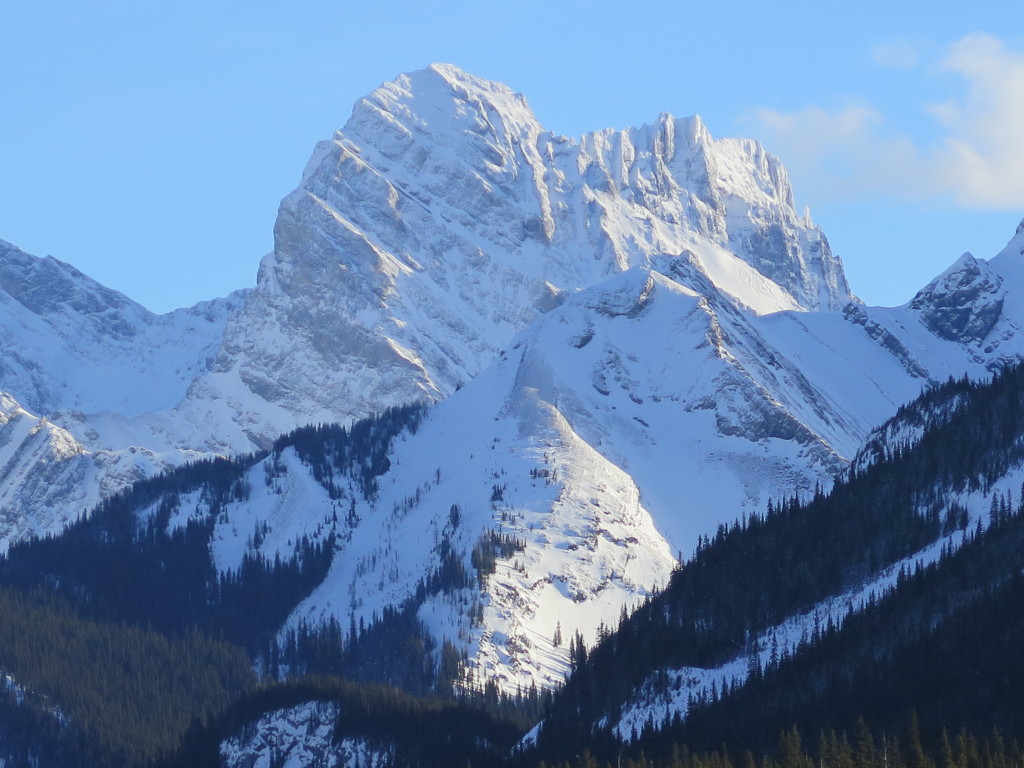 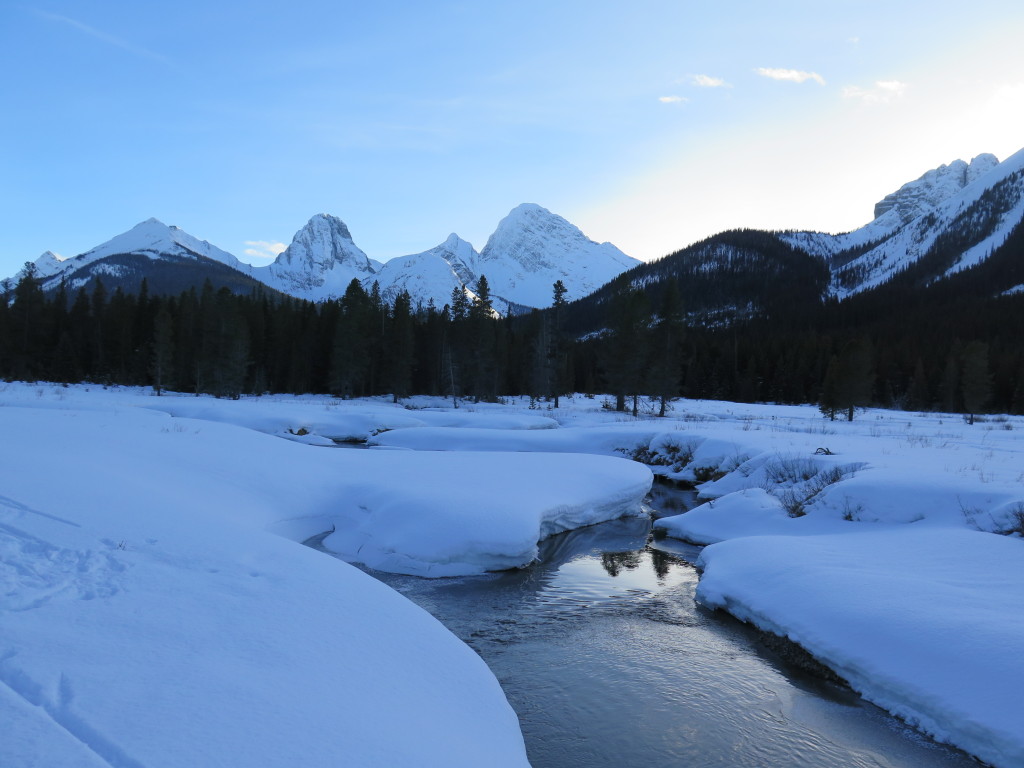 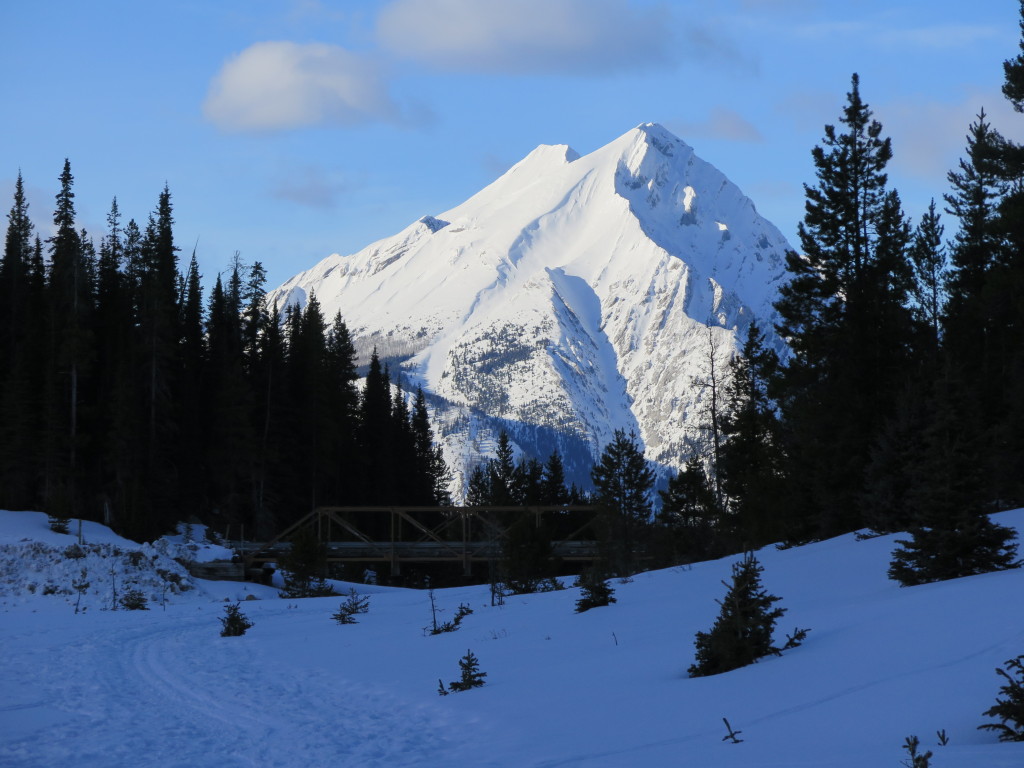 Before heading back, I took a few deep breaths and a few pictures (both mental and digital), I felt like I had just experienced something Iâ€™ll rarely get to experience again.

When I made it back to the lodge, I was greeted by friendly-faces and roaring fires. One of the employees asked me what I had been up to and I said, â€œNothing.â€ And I meant it.

The rest of my time at Mount Engadine lodge was filled with relaxing naps, delicious food and some of the most amazing stargazing I had ever seen in my life. As many of my fellow lodgers, started to get ready for bed, I got dressed up and headed back into the meadow. Because we were so far from anything, you could see thousands of stars. When youâ€™re in a place like that, you realize that itâ€™s not that rare to see a shooting star, because we youâ€™re aided by so little light-pollution, you realize weâ€™re always supposed to see shooting stars. I was out there for an hour and just watched the stars. While Mount Engadine does have plenty of modern amenities, television isnâ€™t one of them. Which is fine, Iâ€™m not that desperate to stay in touch with the world, but the things I saw in the sky that night were better than anything I had ever watched on television. 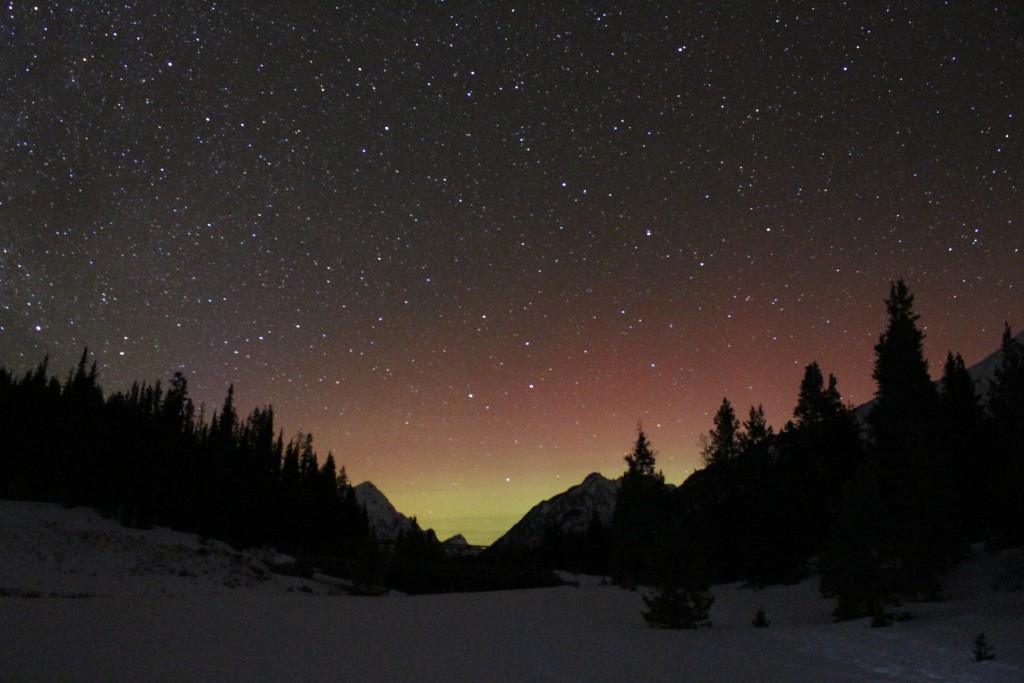 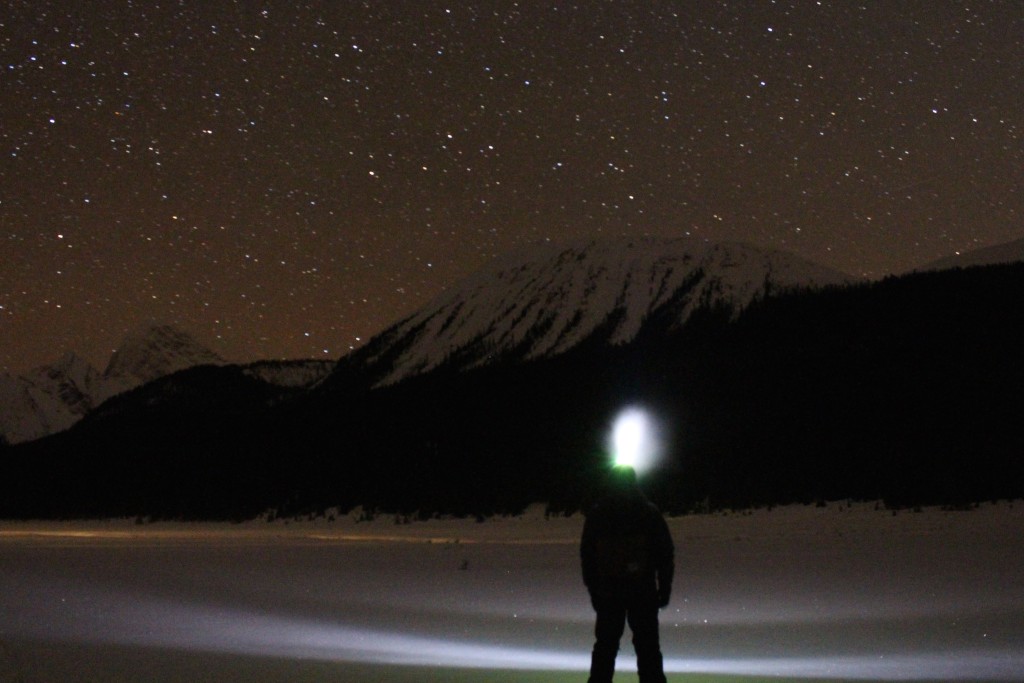 I made my way back into the lodge, and the lights were a little dimmer, the fires were slowly dying out for the night and the guests were tucking themselves into what would surely be one of the best sleeps of their life. I know it was certainly mine. Thereâ€™s something about being out there, knowing that youâ€™re warm and safe, but in the middle of nowhere, that lets me relax like nothing else. This resulted in one of those sleeps where you wake up in the morning and feel like youâ€™ve just caught up on all the sleep that youâ€™ve ever missed. I was ready to take on the day.

Downstairs, breakfast was being served and the other guests were bustling getting ready for the day. You see, Mount Engadine Lodge is a favourite for hikers, cross country skiers and snowshoers, because it gives you a chance to get a start on the day. Instead of getting up and driving an hour or two into the mountains, youâ€™re already there. So the lodge staff fills you with a delicious breakfast and even gives you a packed lunch to go and then before most people in Calgary have even gotten in their cars to come to the mountains, youâ€™re already starting your dayâ€™s adventure. And me? Well, I had something different planned that day. That day I wanted to do something like I had done the day before, so something that fell between the middle of â€œnothingâ€ and â€œrelaxing.â€ Sure I like to ski, hike and snowshoe, but I can do that all the time. What I canâ€™t do all the time is sit by a fire, in a couch that you sink into, while watching for animals out crystal clear windows with epic mountains in the background. Thatâ€™s something I can do all the time. So thatâ€™s what I did until it was time to check out.

What a way to start your day. #explorealberta pic.twitter.com/RDqRsIWGJK

If Iâ€™m being honest, while I was there, I didnâ€™t talk to the guests a lot. I was there by myself, and sort of wanted to give everyone else a chance to chat with the people they came up with. But one thing I figured out quickly was that out of all the guests, I was the only one that hadnâ€™t stayed at Mount Engadine before. People had come from all across Canada to stay there, and they had done it more than once, which is the best kind of recommendation there is. As for me, Iâ€™ll definitely be back. When the place that brought you pure silence is only a car drive away, you never forget that.