>It’s tuesday which means that it was ABC’s turn to announce their fall schedule. There weren’t very many suprises, but they did give me a belated birthday gift. Halleluah ABC finally cancelled According to Jim! I’ve never seen this show, but I hate it on principal. I hate that more people watched this show than ever even came close to Arrested Development. So many good shows have fallen to the wayside, while this stinker has stuck around for 6 years! 6 years people. Finally it looks like ABC came to their senses…………….oh wait never mind, look what one of their new shows for next year is: 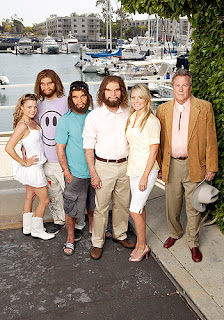 That’s right, those are the cavemen made famous from the Geico commercials. Everyone all together now: AaaWhhaaaaa? Seriously ABC, you have some of the most quality shows on TV (Lost, Grey’s Anatomy) but you now also have this stinker on your schedule. Why would you do this to yourself ABC, why?

What else you got for me? 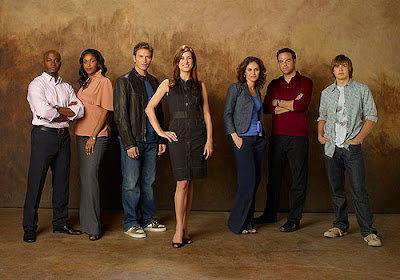 Ahh yes, the Grey’s Anatomy spin off….still called Private Practice. This was a no-brainer to be picked up, but I was surprised by all the negative feed back. I mean besides Piz’s (far right) giant nipples. Seriously, see a doctor! (haha, get it, cause he works in a doctors office! ahh never mind)

Anyway, I’ll try this show out, but I’m really going to miss Addison on Grey’s Anatomy, week after week, she is my go to girl for non-craziness!

But I need some comedy in my life….what you got in say…a former 90’s bombshell? 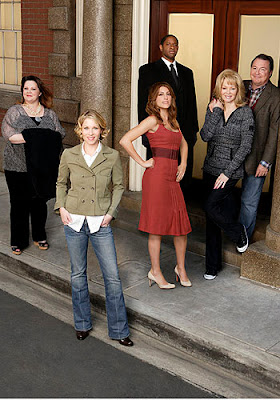 HOly shit, is that Christina Applegate?!?!?! Now that’s more like it ABC! I’ve always been a huge Applebees…i mean Applegate fan. This one is called Sam I Am. She is seriously funny. Have you guys ever seen The Sweetest Thing? She steals that movie! Comedy Gold. I know alot of people didn’t like her last show NBC’s Jesse, but I was always a fan. Plus the show co-stars First Lady Logan…i mean 24’s Jean Smart. Maybe that’s why she only popped up once this season. (Seriously, where did she go?) Thank You ABC, now have you started working on those Cavemen yet?

Actually, I’m quite excited about several of ABC’s new shows.

Miss/Guided :Has Judy Greer (!) and Brooke Burns. They could read the phone book and I would probably watch! Greer plays a woman who was unpopular in high school returns to her alma mater as a guidance counselor.

Cashmere Mafia: Wait…didn’t we got over this yesterday with Lipstick Jungle. 4 women, check. NYC, check. Sex and the City ripoff? Check. Hmmm. But this one has Lucy Liu. Man I’d pay to watch her kick Brooke Shields ass. Can the show be about that instead?

If Desperate Housewives and Cashmere Mafia weren’t enough for you. There is also Women’s Murder Club. Four friends in San Francisco combine their talents to solve murder cases; based on novels by James Patterson. Can the first victim be Brooke Shields? I’m just asking.

Fore more info on all of ABC’s shows click here. Which ones get you excited. Is it to early to start a “I hate Cavemen” facebook group?