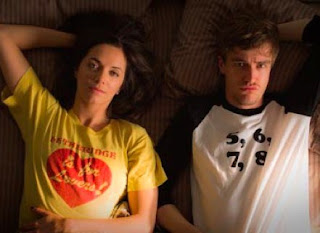 I’m going to admit it, I’ve never really gotten on the ‘web-series’ train.

I barely have time to watch regular TV, let alone time to be watching shows made by lame ass actors who graduated from the National Theatre School ten years ago and have just recently found a video camera.
But the other day, I got the link to a web-series called Bunny Hug sent to me and decided to check it out.
The series stars Christopher Austman and Michelle Morgan (Heartland). But be warned Heartland fans, Michelle couldn’t be playing a character more different than the one she plays on the CBC show. This series is definitely for grown-ups, or really messed up tweens.
Bunny Hug is the story of Travis and Celeste, two former lovers forced to live together after breaking up because of a bad economy, and self-righteous indignation.
Right now, the series consists of three 5 minute mini-episodes and each of them are funnier than the last. If you have time to spare, I recommend that you sit yourself down and watch them. I’m not sure how they did it, but in 15 short minutes, I laughed more times then I ever did in six seasons of Corner Gas. Yes, I realize that will only give perspective to those under the age of 65.
While the idea of two exes forced living together isn’t that original, it is the show’s zingy dialogue that makes it so enjoyable. Austman and Morgan also have excellent comedic timing and as with many great comedies, sometimes you don’t need to say anything at all, to get the biggest laugh. Simply put, Bunny Hug is refreshingly funny.
As a bonus and like any good sitcom, Travis and Celeste both have best friends who are crazier than they are, seems impossible given the decisions these two make, which gives you an idea of crazy they really are.
Are all web-series as funny as Bunny Hug? I’m not sure, but it has definitely convinced me to start looking!
Check out the first episode below, then go to the Buggy Hug Website to watch the rest!
You’re welcome!