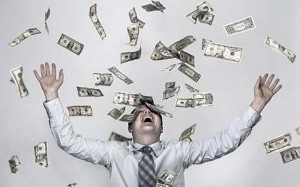 But could you spend if you only allowed to spend it on other people? Now that’s a lot more interesting. Starting on Wednesday, four Canadian celebrities will be given the chance to spend $7,000 on other people and you could be one of those people that enjoy the generous windfall.

If you live in Vancouver, Calgary, Toronto or Montreal then listen…rather read up, because you aren’t going to want to miss this. The THRiVEtastic celebrations will take place in four major Canadian cities (Vancouver, Calgary, Toronto and MontrÃ©al); involve four celebrity contestants and over $100,000 in giving. ING DIRECT is donating $15,000 to each THRiVEtastic celebrityâ€™s charity of choice. The celebrity who completes the task the fastest will win an additional $15,000 for their charity.

Okay, so how do you get the money? The celebrities Trevor Linden (Vancouver), Henry Burris (Calgary), Amber MacArthur (Toronto) and Tammy Verge (Montreal) have to follow a certain set of rules. Some of the rules include not being able to spend more than $500 at a time, make three donations in person and the most interesting: Contestants must field 3 Tweets and 3 Facebook requests (#THRiVEtastic or Facebook.com/SuperStarSaver).Â  So there’s your opportunity right there.Â  If I were you and you work for a school, a charity or non-profit, make sure you tweet and facebook your heart away! $500 bucks for a few tweeets? Totally worth it, no?

This is one of those opportunities that you always seem to hear about afterwards, so I wanted to make sure you had lots of time to get your tweets and wall posts ready!