by Mike Morrison 14 years ago13 years ago 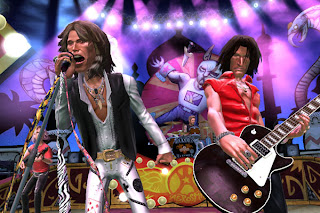 Calling all guitar heroes!!!
Or people who think they are guitar heroes because they can get 100% on medium level.
I just found out that the legendary (see: old) rockers Aerosmith and special guests ZZ Top are about to begin their Western Canadian tour and they are giving away the chance to be their opening act! (see: embarrass the hell out of yourself).

One “guitar hero” will be chosen in each city to ‘perform’ playing Guitar Hero:
Aerosmith on stage before Aerosmith roars onto the stage. The winner will
also receive two tickets to the show, a Guitar Hero: Aerosmith game pack,
and a personal congrats from Steven Tyler and Joe Perry before the show. Oddly enough, the two will only talk to the winner, not the guest.

Check out their website to see how you can enter the contest!
I haven’t had the chance to play the game yet, but I love me some Guitar Hero, so I can imagine how kick ass the Aerosmith version is!
And I have to say, even though the aerosmith tickets are STEEP (see:$$$), they are most definitely worth it. I saw them a couple of years back and they KILLED IT. Very, very cool.
Check out Aerosmith/ZZ Top when they come to your city:
August 7 – Winnipeg
August 9 – Regina
August 11 – Edmonton
August 13 – Calgary
August 15 – Vancouver
aerosmith