Wait…I don't get it. 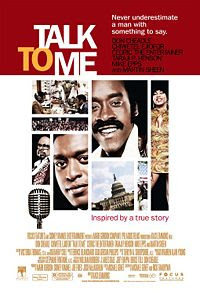 This past week my friend and I received passes to the advance screening of Don Cheadle’s new movie called Talk to Me. I was really excited about seeing this movie because EW made it it’s movie pick of the week. This was just one of the many great reviews of this movie that has gotten pretty much across the board acclaim.

With the exception of some movies like The Thin Red Thin, I usually agree with the critics, but when it came to Talk to Me….I don’t know, I just don’t think I got it.

For me, although Don Cheadle was amazing as always, I don’t really know why this movie was made. Talk to Me tells the story of famous radio DJ Ralph “Petey” Green in the 60s who revolutionized the way the urban audiences were treated during the post-Martin Luther King Jr. era.

The true is story is very intersting……well at least it was the 20 times I had seen it before. The rise and fall of Petey, although may be true, it is no longer interesting. I saw it when I watched Ray, Dreamgirls, I even saw it when I snuck into the theatre and watch Howard Stern’s Private Parts. That’s right, I snuck into Private Parts cause I was a minor! I was bad ass, I tell ya Bad Ass!

Lots of people of intersting stories, it doesn’t necessarily mean it should be made into a movie. But for all you screen writers out there who insist on making everyone’s story onto the big screen try to make it compelling, intruiging and, oh I don’t know, orginal.

That is why I am sad to announce that Talk to Me joins the ranks of only one other movie that I have ever walked out on. What was the other movie? Well, I’m glad you kept reading this sentance, it was Thirteen Days with Kevin Costner.

Have you ever walked out on a movie? Tell me I’m not alone here.

Oh and because it was a pre-screening you know there was going to be prizes and it wouldn’t be a contest unless I insisted on winning something so I won the soundtrack to the movie itself. So far, I’m enjoying way more than the movie!