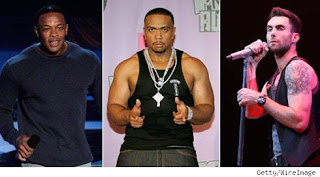 So it has been 24 hours since MTV’s Video Music Awards and I still have some lingering questions racing around my head.

1. Do Dr.Dre and Timbaland have the same Steroid dealer or do they just exchange helpful “weightlifting tips”?

2.Can Pamela Anderson really not do any better than Tommy Lee and Kid Rock. I mean really?

3.Random thought: If Justin Timberlake was just a random guy that worked at Starbucks everyone would think he was gay, but because he is big star people think he is sexy. Interesting…

4. How come Rhianna was pretty much the only one that sang live. I guess so did Alicia Keys, but we know she is talented, Rhianna came as a surprise.

6. How many time will you watch Britney’s completley embarssing, awkward, hilarious, terrifying, comedic gold performance of “Gimme More”? I’m at 432.

In case you are the only person who hasn’t seen it. Here you go: