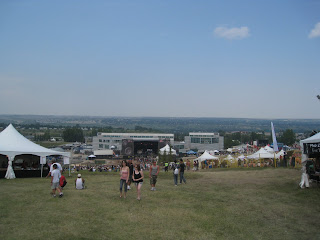 Back on the grounds and I will updating about different stuff going on on the grounds today. I’m expecting a smaller crowd today because Pearl Jam isn’t playing, but should still be fun.

2:34pm I know a lot of people just got their tickets for PJ, so Sunday tickets are on sale all over the place.
Here is my favorite ad currently on Craigslist:
“I offer one ticket for Virgin Fest on Sunday (Calgary) in exchange for 1 coffee from Caffe Artigiano. Pick up only in Eau Claire (2 blocks from Caffe Artigiano). Email: vicgalla@hotmail.com Email if interested and leave a phone number. I know Billy talent is worth a 7-Eleven or a McDonald’s cup of coffee, but Metric is decent. “
2:45pm The recycle depot had one person bring in 500 bottles last night and got a free virgin phone. They are expecting two more today. I’m surprised there aren’t more, there are cans and bottles EVERYWHERE.
2:50pm Just talked to concert-goer Hussain, who was one of the crowd-surfers from last night. He said he is surprised there isn’t free water for everyone and I sorta have to agree. Water is at a premium on the hill today.
2:53pm It is a LOT hotter here today than yesterday. Looks like there might a storm or two in the air.
3:00pm Social Code is just wrapping their set. They’ve play at least three covers, seems like an odd thing to do when you have the Virgin Stage to yourself….
3:17pm I just went and checked out this really cool mural project. It’s being completed by Tommy Matejka and it’s a traveling piece of work. He is actually going around with VirginFest all across canada and works on it more and more at each stop. 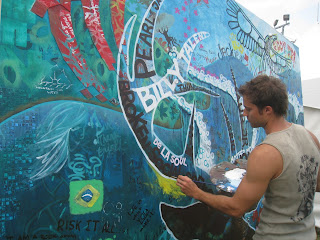 3:35pm Autograph times. Michael Bernard Fitzgerald 4:30, White Lies 5pm, Tokyo Police Club 6:30pm, Shout Out Out Out 8:30pm
3:43pm Waiting for the White Lies to start. The buzz around these guys is insane!
4:00pm Apparently the White Lies are not the Killers. Could have fooled me.
4:05pm Michael Bernard Fitzgerald is easily pulling the biggest crowd at the secondary CJAY crowd. It’s a shame that that stage is a beer garden, because there are about 100 teenagers forced to watch from a far. 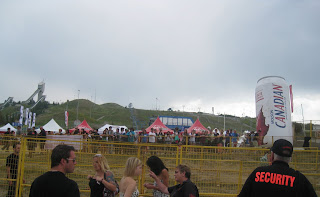 5:44pm: Taking precaustions with the looming raining clouds. The remaining two acts, metric and billy talent have been moved by 15 minutes.

6:00pm Waiting to go down and take Metric pictures. Very excited. Love.This.Band.
6:44pm The crowd, of mostly tweens, are intense. They are crowd surfing and throwing themselves all over the place. Intense. 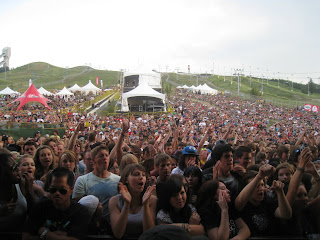 7:00pm As expected Metric continued to be one of the most original and exciting acts in the industry right now. 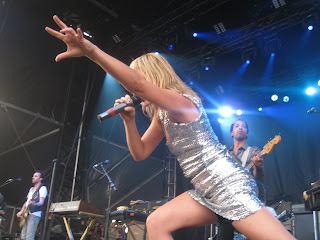 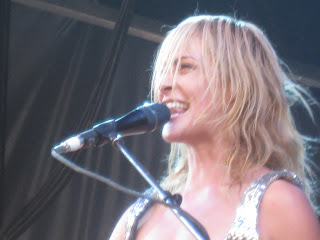 8:00pm A couple of minutes late and Billy Talent takes the stage. A completely different crowd than for Pearl Jam. Luckily a little more subdued.

8:05pm I once served the members of Billy Talent Lobsters and made them wear bibs. Ahh part-time jbos.