Video: Calgarian takes on Jimmy Fallon in a lip-sync battle...

MeetÂ Lincoln Constable. Â No, he’s not a super hero, although his name would indicate otherwise. He’s actually the guy behind one of the biggest viral videos I’ve seen in recent days and he happens to be from right here in Calgary.

A few days ago, Constable turned on his camcorder and sent a message to none other than Jimmy Fallon. Well, more specifically, he lip-synced a messaged to Jimmy Fallon. If you have’t been watching Fallon’s foray into late night television, one of his most infamous skits are his lip-sync battles he does with celebrities. So far, there’s been Joseph Gordon Levitt, Paul Rudd, Emma Stone andÂ John Krasinski. The results are always amazing to watch, but they should be, they’re all trained performers. 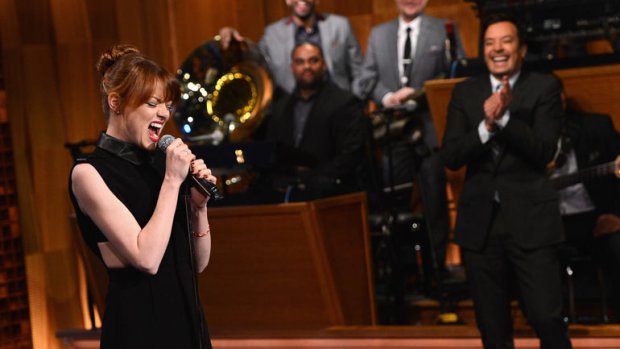 But what about a regular guy? Could he take on Jimmy Fallon?

Enter Lincoln Constable. Â He’s a crew chief on the ground handling crew at WestJet and on May 14th, he challenged Jimmy Fallon to a lip-sync battle like none other. In his four minute long video, Constable shows his skills and his range as he tackles a variety of songs, ranging from Kanye to The Little Mermaid.

While he’s never entered a lip-sync battle before (because no one has), he told me that he does sing along to music all the time, so it’s like practicing all the time. He chose the songs by going through is iTunes trying to think of what would both showcase his lip syncing ability and what would be funny. I think he definitely succeeded in doing that.

While he hasn’t heard from Fallon or NBC yet, he has been chatting with news outlets from across Canada, so I’m hoping it’s only a matter of time! Â It would be fun to see Jimmy Fallon take on a guy from Calgary. He always seems like he’s a good sport and, as far as I can tell, Lincoln is the first person to either ask him, or do it with a kick-ass video!