This morning on Breakfast Television Mayoral front-runner Barb Higgins had a sit down with the show’s political analyst Mike McCourt and things got a little heated. There was no Jerry Springer-style blow-up, but yikes, it was definitely awkward. I have to say that Higgins certainly held her ground and was able to defend herself and her decisions. But you could obviously cut the tension with a knife.

Watch for Tara trying to make the best of a bad situation and slip into the segment in at the end of the interview, it reminds me a lot of Christmas dinner at my house.

UPDATE #1: Apparently things only got worse after the show went to commercial.Â  Unfortunately none of it was caught on camera but Higgins got very, very angry after the interview and laid into ArtsVote volunteers.Â  If you want to follow what happened on Twitter, check out Mark Hopkins or DJ Kelly.

UPDATE #2: After Breakfast Television, Barb Higgins headed to X929 for an interview with The Show.Â  You can listen to it here.Â  The questions started off pretty easy but things got heated pretty quickly!Â  Listen to the interview here. 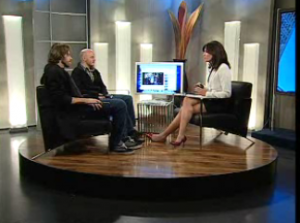 UPDATE #3:Â  X92.9’s Fraser and myself were on Shaw TV today to talk about this morning’s video and ifÂ  social media has made difference in this year’s election! Click here to watch the video.