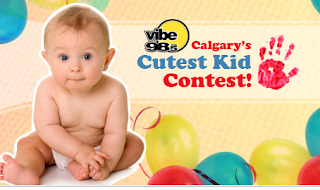 How do you judge cute?

We all know that every parent thinks their kid is the cutest. And as their friends, we always have to lie and agree with them. Well thanks to Vibe 98.5 and their Cutest Contest, I think our cover might be blown.

The contest is simple: Parents, assuming their kid is the cutest, submit their picture to the contest. Then Calgarians go online and judge the children, who range newborn to three years old, and vote based on who they think is actually the cutest. The traumatizing effects of this contest are similar to being a high school student, only the young children don’t have drugs and alcohol to fall back on, only parents who will undoubtedly pressure their kids to be cuter next time.

And what about the ugly factor? And I’m not referring to the kids. I’m talking about the parents that will no doubt go to ugly and extreme lengths to ensure their kid is indeed named the cutest. How far are the parents going to go to win the grand prize which includes a new van (not hybrid), groceries for a year, Monthly Spa Packages for the winning Mom and Dad and more. With prizes like that, I think it’s safe to say that all Calgarians will soon be inundated with Facebook group invites, full page ads in the Herald and probably some banners in the sky.

“Sorry Timmy, mommy doesn’t have time to play, she is trying to win you a van! Go play in one of those playground zones that money and daddy already paid our alderman a lot of money for.”

And then there is the morality question. Is it really fair to name just one kid the cutest? It’s kinda like saying: “Congrats, you have the best genes!” One has to wonder what is the point of the contest? Putting aside the fact that women 18-34 years old is the major demographic for radio stations, do we really to subject their children to a contest where they are based on their looks alone. Why not then have the toddlers parade around Cowboys? Which brings me back to my first question. How do we judge cute? Some teeth? No teeth? Lots of hair? No hair? Boy? Girl? There is no definite definition of cute. After all, some people think that the kids made famous by Anne Gedde’s pictures are cute, while others, like myself have paid thousands of dollars in therapy bills to forget them. Oh one last question, what are the chances these kid’s parents would subject themselves a similar contest? Yeah, that’s what I thought.

But then again maybe I’m trying to be too politically correct. My friend Jenny, whose daughter Calla is entered in the contest, explained her reasons for entering as this: “I puked 6 times a day for 9 months, blood pressure, bed rest, c-section…. I have earned the right to win 675$/month in free spa treatments!”

Which I guess makes sense, but I have a feeling that Jenny’s intentions might be different from hundreds of other moms and dads who might just be looking to thrust their kid into some sort of Calgary limelight. So how do you vote and should you even vote? I think I might need my mommy on this one.