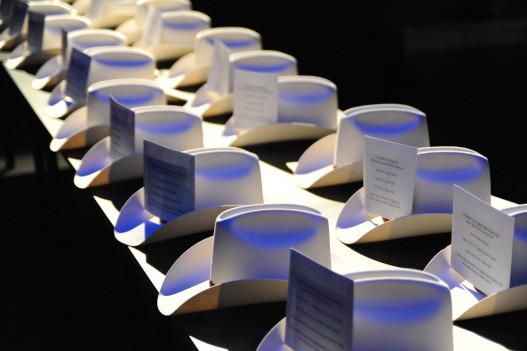 Last month, you may have heard that a few thousand people had trouble getting Garth Brooks tickets?Â  Well three lucky people in Calgary, Toronto and Vancouver are about to get their hands on the most coveted tickets in all the country and I’ll they have to do is find one lucky white hat.

This Wednesday, Calgary Stampede, Tourism Calgary, and Travel Alberta will host a public White Hat Drop in three Canadian cities simultaneously, with a chance for one lucky person to win a once-in-a-century prize!Â  Hidden inside one of 200 white hats in Olympic Plaza, Burrard Square and Dundas Square is one red envelope that will contain an unforgettable package to experience the Calgary Stampede during its Centennial Anniversary.Â  This exciting event will take place over the city’s respective noon-hour in all three public spaces.

The VIP prize package for two people includes the following:

If you want to win these hats, here’s what you have to know.Â  (Times are respective of each time zone.)

11:30 a.m.Â  â€“ 200 wristbands to be distributed to the first 200 people.Â  Participants will line up behind one of four designated entrances.

12:30 p.m. – 20 participants at a time will get access to the designated area and will have 30 seconds to choose one white hat to stand beside.

12:35 p.m. All participants simultaneously uncover chosen hat to discover if they have won the red envelope.

I won’t be trying to get a hat, because this all sounds too stressful for my anxiety riddled mind.Â  But I’ll definitely go check it out!Â  Who’s going to try and get the sweet tickets?