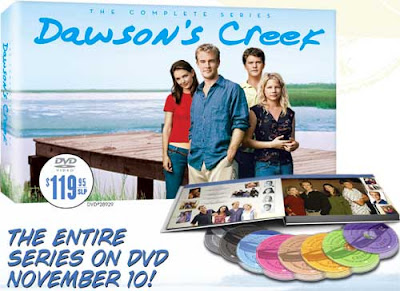 Start saving your money now, another complete series is coming your way!Â
Dawson’s Creek: The Complete Series is hitting shelves November 10th. Â This is on top of the soon to be released Ally McBeal: Complete Series (Oct. 6th)Â and Futurama: Complete Series (October 13th.)
I don’t think I’ve seen an episode of Dawson’s Creek since University, when TBS would air four-hour marathons every morning. Â I also like to call this, marathon the reason I almost failed University.
Perhaps my fondest memories of this show were near the end, when the show’s writers started to realize how annoying both James Vander Beek and Dawson were. Thus he was barely ever featured. Â Sure he dated some actress’ here and there, but did he ever get whole episodes like Joey Potter? Hell to the no. Â Plus this is around the same time that Michelle Williams really started to become the amazing actress we now know. Â How else do you think she worked through the crap they kept giving her.
Aww man, now all this reminiscing makes me want to watch the show right now. Â I wonder how I can get my hands on the set early. Â Any ideas? Â I’m soooooooooo impatient.