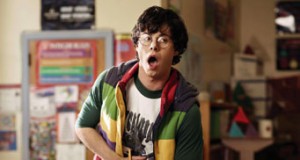 A couple of weeks ago, MuchMusic got a lot of flack for applying to the CRTC for the permission to play less music. Â But if they are planning on replacing crappy Selena Gomez videos with funny and original teen comedies, then I think I might be okay with it.

MuchMusic’s new show Hard times of RJ Berger is not your idea of a normal high school coming of age comedy. Â It’s about a geeky high school loser who has a crush on the school’s hottest girl and is tormented by bullies on a daily basis. Â Oh and he has a giant penis.

Like a said, this isn’t your normal Muchmusic program, it is racy, filthy and completely over the top, but most of all it’s funny. Â Like really, really funny. Â But if the premise wasn’t any indication, the show is for a very specific type of person. Â In the same way Sex and the City and American Pie were racy and provocative for their Â time, Hard Times will certainly make people stop and pay attention, whether they want to or not.

But I can’t rent until I feel like you fully grasp how daring and risky this show is. Â (Of course some will interpret the words daring and risky as rude and offensive.) So to help prove my point, I grabbed some quotes from the show’s first five minutes. Â Try to guess which of of them are real and which are made up:

Okay so I lied, they were all from the show’s first five minutes. Â Shocked yet? Â The show’s first scenes are soon followed up by RJ’s parents talking about….actually, I don’t think I can even write about it on this blog.

While this show isn’t going to win any Emmys and will probably be kicked out of the Teen Choice awards, it doesn’t mean it is not funny. Just make sure you parents aren’t any where near you when you watch it!