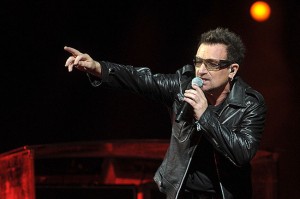 Who knew that Moncton, New Brunswick was capable of helping U2 break records?!Â  But that’s exactly what happened at last night’s explosive show in (incoming Fredericton bias) the province’s second best city.

The Irish rockers played a rather wet outdoor show to a crowd of 75,000 people and with that, a few world records came tumbling down. Since the 360 tour started almost two years ago, it has become the highest grossing tour ever ($736 million) and played to more than 7.2 million people. That is insane my friends.Â  Word is that the United States government is asking you to to lend it “just a few bucks,” and they “swear that they’ll pay them right back!”

U2 weren’t the only ones having a good time, if my Facebook newsfeed is any indication, my friends back in my home province of New Brunswick had an AMAZING time.Â Â Â  Glad to see that even in a giant field, they still know how to have a great big ol’ kitchen party.

This is unconfirmed and purely suggested by me, but I’m also guessing/assuming that Bono tried a McLobster and loved it.Â  Great minds think a like.

Now the only question is how will Moncton top this concert series next year?Â  What’s that?Â  A Moffatts reunion show?Â  I’m in!