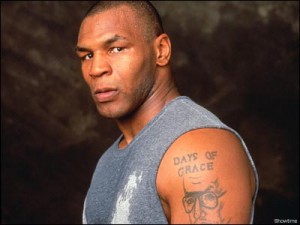 This is turning out to be quite the interesting summer for the martimes.

PEI announced a couple of weeks ago that Regis and Kelly will be filming a weeks worth of episodes on the island and now comes word that Moncton is recruiting another star for their province. Â Who’s the star?

Okay, so I used the word star very loosely.

New Generation Boxing is hoping to recruit the boxer, movie star and convicted rapist for a formal dinner and outdoor boxing card match at Parlee Beach in August. Â The promoter said that Tyson has requested that if he did it, the money would go to a Children’s hospital. I guess that should ease a guilty conscious.

The promoter also says the deal is about 99% confirmed. Â It makes me wonder what that one last percent is? Probably something to do with the yummy McLobsters.

Hmmm. Â I’m not sure how I feel about the boxer only being an hour an a half from my family. Â I happen to know that they all like their ears just the way they are.

Would you pay to watch Tyson?