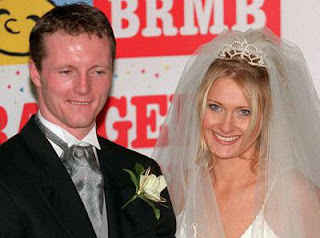 That is a question that thousands of Calgarians will be asking themselves around the watercooler and on the cramped c-trains over the next couple of weeks, thanks to a new social experiment developed by one of Calgary’s radio stations Energy 101.5.

The experiment called, Two Strangers and A Wedding, is essentially your parent’s worst nightmare. Over the next seven weeks, through a series of interviews and tests, one woman and one man will both meet and get to know each other only over the airwaves. The experiment will culminate in late October when the strangers will walk down the aisle and hopefully get married. Oh and did I mention that the bride and groom will never meet or even know each others real names until they meet at the alter! Like I said, your parent’s worst nightmare.

When I initially heard of the experiment a couple of weeks ago, I was obviously alarmed. The new station, which is still developing it’s audience in the increasingly competitive radio market, seemed to be stepping in FOX network territory. Fox of course brought us Who Wants to Marry A Millionaire, Married by America and The Littlest Groom. However, a quick Google search showed me that Two Strangers in a Wedding has already already taken place all over the world with a variety of results. Some of the couples never made it to the alter, others got married then quickly divorced. But many of the couples got and stay married, some even have children. (Carla Germaine and Greg Cordell pictured above, they met and married through the contest in 1999.)

Not that that has stopped critics from calling the social experiment a spit in the face of marriage, I can’t help but wonder if it is any more of a joke than Bristol Palin’s upcoming nuptials to some guy that knocked her up and isn’t that the same ceremony that Republicans are currently praising?

The experiment is a first for Canadian audiences and there are obviously a lot of risks to whomever is brave enough to apply. But is it any riskier than trying to meet the love of your life at Cowboys? I think not!

More links on the Wedding:
The National Post
The Calgary Herald
CTV