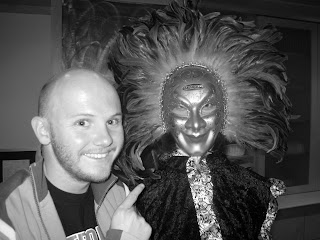 A couple of weeks ago I mentioned that Energy 101.5 was starting an amazing social experiment called Two Strangers and A Wedding. Well they are now down to the Final 5 brides and all week on the Freeway and Meg Morning show they are talking to each of the brides. The catch? We still don’t know there names or what they look like. They are simply being referred to as the day of the week they are being featured. Monday Bride, Tuesday Bride, etc. Well today Mike’s Bloggity Blog got an EXCLUSIVE chat with Program Director Rob Mise and Thursday’s Bride. That’s right, I actually got to go down to the studio, meet her and have exclusive one-on-one chat with one of the girls that might be THE BRIDE in Two Strangers and a Wedding. No other media has met her so far. Actually, none of the DJs from Energy have even met her, as they don’t want to influence the audience vote.

So I can’t tell you anything about her looks-wise. I can however confirm that she is a girl. As far as I could tell she is not missing any limbs and she has two eyes. I don’t even know if I can tell you that, but I’m a risk taker.

When I was about to meet her, I quickly thought, “Oh god, what if I know this girl!”, I can now confirm that I do not personally know Thursday’s Bride!

We did get to chat for about ten minutes about why she decided to sign up for the controversial social experiment and explained rather simply,”Why not, what is the worst that could happen?” In case you haven’t been following, everyone involved with the experiment goes through test after test after test. They include blood work, physical, psychological, spiritual. They even had to do a polygraph. The advantage is that Energy 101.5 are screening way more than anyone ever does when you meet a random at a bar. “We are stacking the odds in the bride and grooms favor, we’ve done all the homework for them all ready,” explains station manager Rob Mise, “Plus they are two consenting adults and we are using best technology and the top experts and we just want people to give us a chance.”

But explaining that she might be getting on married on October 30 to a stranger hasn’t been easy, especially for the men already in her life. “My dad, my uncle and my boss were unsure.” The potential bride’s dad told her: “You are too smart, too beautiful to get married in a competition.” He has since warmed up to the idea. So have her friends and family who have all told her that if they were single, they probably would have applied too!

So what kind of guy is she looking for? “Tall, dark and handsome” Thursday’s Bride jokes, she really wants someone fun. She wants to marry her best friend. Like many of us, the most successful relationships Thursday’s Bride knows married their best friends. She loves the idea of inside jokes and wants a guy that is honest and that she can communicate with. Let’s just hope she is okay with only communicating with him over the phone for the first two weeks of their relationship!

And whoever marries her doesn’t have to worry about baggage, while she does have a dog, she doesn’t talk to any of her ex-boyfriends and she is ready to fall in love. “I haven’t met anyone that I felt a connection with”. She even admits to dating some dirtbags. But she is a risk-taker and that’s why is applied for Two Strangers and a Wedding. “They (the radio station) have a better chance of finding someone that I would be compatible with, they are doing all that screening, I don’t imagine someone would be able to sneak through. I think they are going to have a good chance of finding someone.”

And with an attitude as positive as….oh I almost typed her name…..as Thursday’s Bride, we can only hope that she does actually find her Prince Charming.

You can listen to all of this week’s Brides on Energy 101.5 and starting tomorrow night you can actually vote on who your favorite is! Ohhh this is going to be soooo good!!!

Now, if Rob would just back to me about singing a song at the wedding……

ABOUT THE PICTURE: Okay, so to keep it fair they made Thursday’s bride wear a mask for the photo, but during our interview there was no mask. They also made her wear a scarf to hide her hair and I made it black and white to keep it fair. And what about the scary mask itself? No explanation.