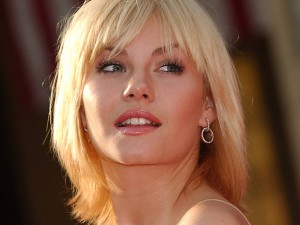 We don’t give Canadian cutie Elisha Cuthbert (@CuthbertElisha) enough credit.Â  Sometimes, when you least expect it, she shows shades of being a secret genius.

Take for example her lastest tweet about the Teen Choice awards late on Monday night:

Hey, don’t get mad at me Bieber fans. She said it.

Further down her feed, Elisha gets a little political when she tweeted:
“Prop 8 was struck down! Amazing news and it’s about time! Congrats to everyone! #NoH8”

And when a fan voiced his concerns and said he was going to unfollow her, she simply stated:
“Probably for the best. Your ignorance isn’t welcome here anyway RT @JM1321 wow u just lost a fan”

So can we get Elisha working again soon.Â  I can totally see her as Penny’s sister on The Big Bang Theory or sipping some wine with the gang on Cougar Town.
Or at the very least a Popular Mechanics For Kids movie?Â  Surely there is a Transformers-type mystery that her andÂ  Jay Baruchel can solve together.

Either way Elisha, you are really doing it for me!Â  Thanks!