by Mike Morrison 13 years ago9 years ago 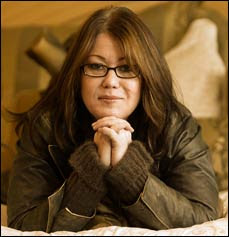 I was late to the Twitter era, but I think I’m finally warming up to it. I see now that Twitter gives us unprecedented access to those we have always admired and those that we admire but with overwhelming embarrassment. However, as I recently learned, perhaps the greatest part about Twitter is the twitterview.

The twitterview is a relatively new experience for journalists because it’s the rare form of interview you can in your underwear. You can do it while you are vacuuming or while your waiting for the movie to start. You can do it while you are breaking up with someone or even while sitting on the toilet. An interview like this can work because it works on both your schedules. You get around to it, when you get around to it. Plus the 140 character limit stops artists from yammering on about things to the point that even you forget what the question was.

The subject of my first Twitterview was the always hilarious Canadian songstress Jann Arden. Jann has a loyal group of just under 1000 followers. Jann is a regular updater on Twitter, which is a must for any twitterview to be successful. Jann seems all to happy to hand out advice, tips or jokes with any of her fans that that @ her. As I twittered Jann over the period of four days, we talked about collaborations, reality shows, wasted jokes and most importantly, Twitter.

@jannarden Do you have a dream collaboration?
@mikesbloggity I would have loved to have worked with the Carpenters….but, ….such is life.

@jannarden I have 25 emails from fans that “love you”. Gay, straight, boys, girls. Why does your music have such broad appeal?
@mikesbloggity I think I have always written about simple human sentiment. I am not political, I am emotional. Humor helps as well.

@jannarden How important is the internet for you as an artist? Twitter? Myspace? Blogging, Facebook etc.
@mikesbloggity I think it’s very important to have a presence on the “Net”…it’s where people are getting their news. Paper is gone….

@jannarden Do you have a “holy shit I can’t believe this is happening to me” moment that sticks out the most?

@jannarden Why is it important for you to stay based in Alberta and with your family?
@mikesbloggity It’s where I belong. I am part of this land and I am drawn to it like a ship to a lighthouse. My family is my home.
@jannarden Having accomplished so much already, do you still have unachieved goals? How do you set new ones?
@mikesbloggity I am not a goal setter at all! I just wake up and deal with the day. I know that’s not a great plan, but so far, so good.

@jannarden yes it has. Do you hate wasting a joke on someone who didn’t hear it or didn’t think it was funny, as much as do?

@mikesbloggity A joke is never wasted! it lingers in joke heaven until you can unleash it on the next unsuspecting fool. Ultimate recycler!
@jannarden: Where do you see the future of Canadian music?
@mikesbloggity: The future is going to be dazzling. Canada is a country full of brilliant singer/songwriters who will continue to rule!!

@jannarden: What CD is really turning your crank nowadays? What about TV?
@mikesbloggity: I am loving Adele. I love BBC mini series of any kind. I love the NY times book reviews on Sundays. “The Glass Castle”..book

@jannarden: I always forget about books. Lastly, words of advice for artists that depend too much on reality shows for making it big?
@mikesbloggity Fame is fleeting. Real artistry comes with much time and perfecting of one’s kraft. It’s not a contest. Never will be.

*******
Check out other interviews (of the regular nature) with Matthew Barber, Sarah Slean and Carly Rae Jepsen