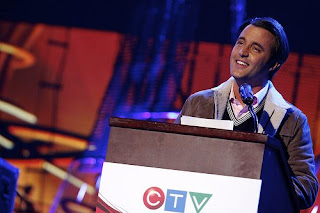 One of my favorite things about Twitter is the ability to “follow” famous people. Whether they are movie stars, musicians or my favorite, television writers.

One of the most annoying things about twitter, is the amount of fake people that are out there. No I’m not talking about the cast of the Hills. People who have nothing better to do than make a fake account and pretend they are someone they are not. Oh wait, maybe I am talking about the cast of the Hills.
So annoying. Unless of course you are talking about @etalkben. In which case, this fake twitter account is the best thing going. Sadly, I feel like it might even be more entertaining than the real Ben Mulroney. Oh who are we kidding, my crappy cellphone that dies after one text message, is more entertaining than Ben Mulroney. I’m pretty sure I found the thing I sneezed onto my kitchen table yesterday, more interesting than the Etalk host. The other day I tripped and fell. I ended up breaking my coller bone and almost died. I didn’t cry until the nurse turned on Etalk. But I’m getting off track.
The best thing about whoever is “twittering” for Ben is that, he keeps insisting he is the real thing. Even though CTV has announced that he is indeed fake.
Some of my favorite tweets include:
Hmm I wonder if they can hire this guy to host Canadian Idol next year when it comes back. Wait, we are still believing it’s coming back next year right? Haha, oh CTV. You make me laugh, even when Ben doesn’t. Which to be clear, is all the time.

UPDATE: Apparantley “Brian Mulroney” has also joined Twitter! Someone is going to be getting there GST-paying ass sued!