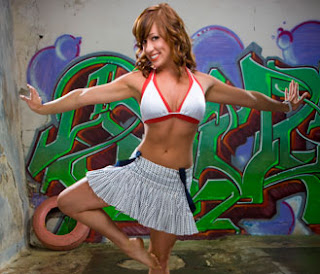 It’s only a couple of weeks until the Fall TV season starts up again and with that studios are making a whole lot of changes! People of are coming, people are going. It’s like my co-workers bedroom for god sakes. (Not an insult-more of a jealous remark)

Here is a quick re-cap:

SYTYCD- Remember last week when floppy haired Nigel implied that he wished he could get rid of Jessica and Comfort instead of Thayne? Well got his wish….sorta. Jessica and her boobs had to bow out of the competition this week because of an injury. But that means Comfort is back in, hence the previous sorta. I guess Jessica will be on the show tomorrow to say goodbye to the her fan (yes, I meant singular) and Mary’s grave-raising laugh.

CSI: It finally happened. Gil Grissom is packing his bags come mid-season. That’s right good ol’ William Peterson is wrapping up his time on TV’s #1 show CSI. He’ll stick around as excutive producer while his character is probably going to go chase down Jorja Fox, which is always the right thing to do after someone hates you so much they quit their job and move out of town. Oh well, I guess there is always Fear 2.

Friday Night Lights: When the show returns to NBC in January (and DirectTV in the Fall), it’s going to look a little different, that’s because former series regulars Scott Porter (Jason Street) and Gaius Charles (Smash) are being bumped to the sidelines. I understand demoting the Jason Street character, I feel a show about football can only include their once star quarterback so much….especially because he is now in a wheelchair. He always kinda reminded me of Duncan from Veronica Mars after we found out who killed Lily Kane. There just wasn’t a need for him any more. I do hope they follow up on him having a kid now though. I am perplexed by the loss of Brian “Smash” Williams, who always added so much intensity and risk to the show. I am however not complaining, I’m just happy to have a third season. Plus if it means we get ourselves some more Landry and Tyra, I am definitely game.