>So like Mondays, Wednesdays and Thursday my TV schedule is full for the night. I’m pretty sure I could be doing something more productive with my life, like adopting an Kenyan baby or going to Rehab, but why?

Tonight things start with the last Veronica Mars for 6 or 7 weeks. But we will find out who killed Dean O’Dell, so I guess that makes up for it. I think Hank Landry is the obvious guess, and this show usually doesn’t go with the obvious. I think Tim might have something to do with it. He has been missing in action the last couple of weeks so look for him to make a big return tonight.
(Also, I’m not ready to discuss that Veronica is being pushed aside for the PussyCat Dolls reality show.)

Then we have another American Idol semi-final round. Tonight the guy’s are up. I’ll try to sum up my excitement to watch the guys tonight…………….(long pause)…………………oh wait, I don’t have any. The boys are boring! Bring on the girls. After last week’s whooping of the guy’s asses by the girls, I was reading alot about how the Top 12 will be uneven, because there are so many better girls then guys, but because of the way the competition is set up, 6 guys will still get to be in the Top 12. As long as Sundace Head isn’t one of them, I’ll be ok.
After American Idol, Fox begins it’s 3 night premiere of Are you smarter than a 5th Grader. I’ll probably watch this show just once, just so I can see host Jeff Foxworthy prove that he is, as we all expected, not even smarter than a 1st grader. (Hi Zach!) Oh Jeff, I might have someone who can be on your show. His name is Sundance, he should be available after Thursday. I’ll get his people to call yours. 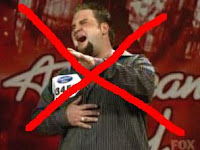