Do you feel that? Do you feel like something is missing in your life?Â  Do you find yourself suddenly watching CBCâ€™s Steven and Chris?Â  Are you the only one wearing red right now?

Well, I have news for you: Youâ€™re going through Olympic withdrawal.

Olympic withdrawal is definitely a thing I didnâ€™t just make up.Â  I mean, how can you go from watching 15 hours a day of live coverage to absolutely nothing (Steven and Chris). What do the sports networks even air when the Olympics arenâ€™t on? But it wasnâ€™t just the cheering on of our athletes you and I miss. Â The Olympics were also good for breaking the ice, whether you were in an elevator or any other awkward situation where youâ€™re faced to say something to the person standing next to you. For 16 glorious days, you can simply say â€œDid you catch the Olympics this morning?â€ and you instantly have something to talk about. But now?Â  Now, youâ€™re stuck talking about politics or your friendâ€™s baby, which is just so boring.

According to the internet, the best way to take get over Olympic withdrawal is to start being active yourself. And letâ€™s be honest, after sixteen days of sitting on the couch yelling at countries youâ€™ve never heard of, a little exercise probably wouldnâ€™t kill you, well, at least it shouldnâ€™t.

Iâ€™ve written about it before, but â€œathleticâ€ has never really been a word that people use to describe me. Not unless itâ€™s preceded by â€œnot.â€Â  That being said, I do like doing athletic activities, I just donâ€™t do them as much as Iâ€™d like to. I once tried sports so hard, I actually got two different stress fractures. I still have the doctorâ€™s diagnosis on display in what I now call my Trophy Case.

The truth is, I think Iâ€™m a like a lot of people who, when thinking about trying new sports, chicken out because it might too scary or difficult.Â  To those people, Iâ€™d like to introduce you to the world of cross-country skiing.

Now, not to diminish the athleticism of cross-country skiing, because judging from what I saw at the Olympics, the sport can be brutal. But in terms of being able to stand up on the skis and move at about the same pace as a snail, well cross-country skiing is actually pretty easy. 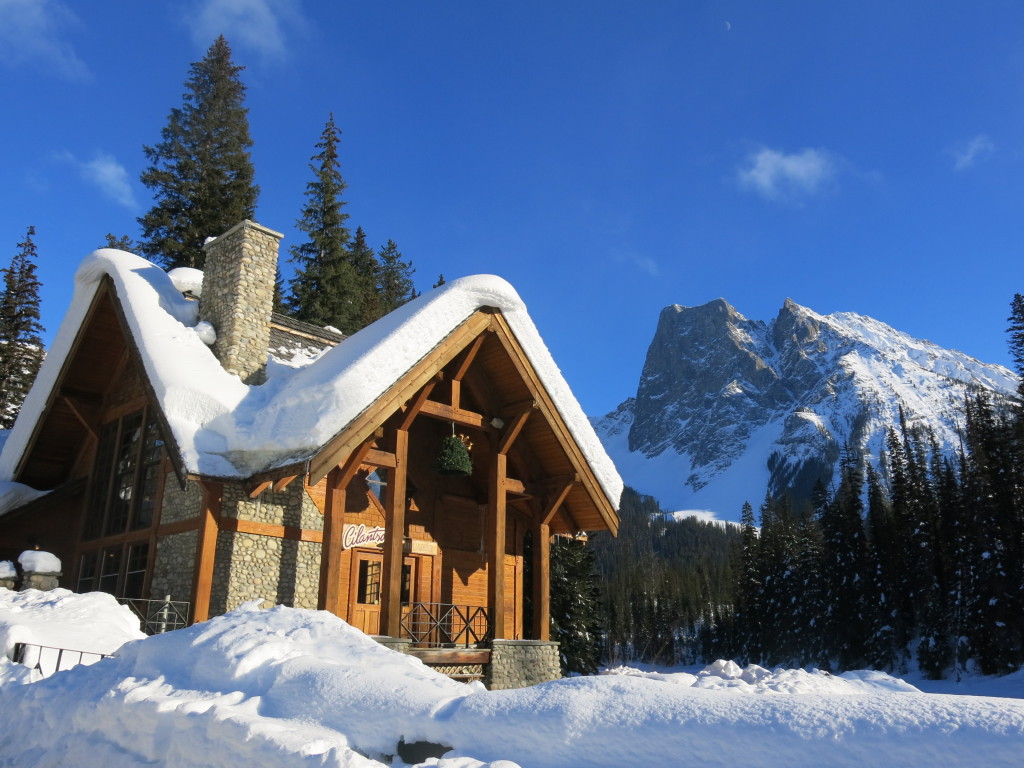 Just before the Olympics, I got the chance to take on the sport, which I hadnâ€™t really done since I was a kid and my dad â€œtriedâ€ to â€œteachâ€ me. I drove up to Emerald Lake Lodge, a stunning hotel on the edge of the Alberta and British Columbian border, outside of the small town of Field.Â  Buried deep in the Rocky mountains, Emerald Lake is a cross country skiers dream, especially for we beginners. Around the hotel you wonâ€™t find much in terms of amenities, actually youâ€™ll find exactly one thing: Emerald Sports.Â  Itâ€™s a small shop thatâ€™s been run by two sisters whoâ€™ve been working there for more than twenty years. There youâ€™ll find your ski rentals and some advice on the best trails and their condition.

For this particular trip, since I really wanted to learn how to cross-country ski, I had some help: Olympian Drew Goldsack (2006 & 2010) and Matt Jeffries from Cross-Country Canada took on the unenviable task of watching me â€œdo sports.â€ Â The fact that two people who essentially cross-country ski for a living would be scary for some, but for me, well for me it was terrifying.Â  But, even though I was hugely intimidated, I quickly realized that both the sport and the two athletes who were going to teach me how to do it, were neither scary or intimidating. 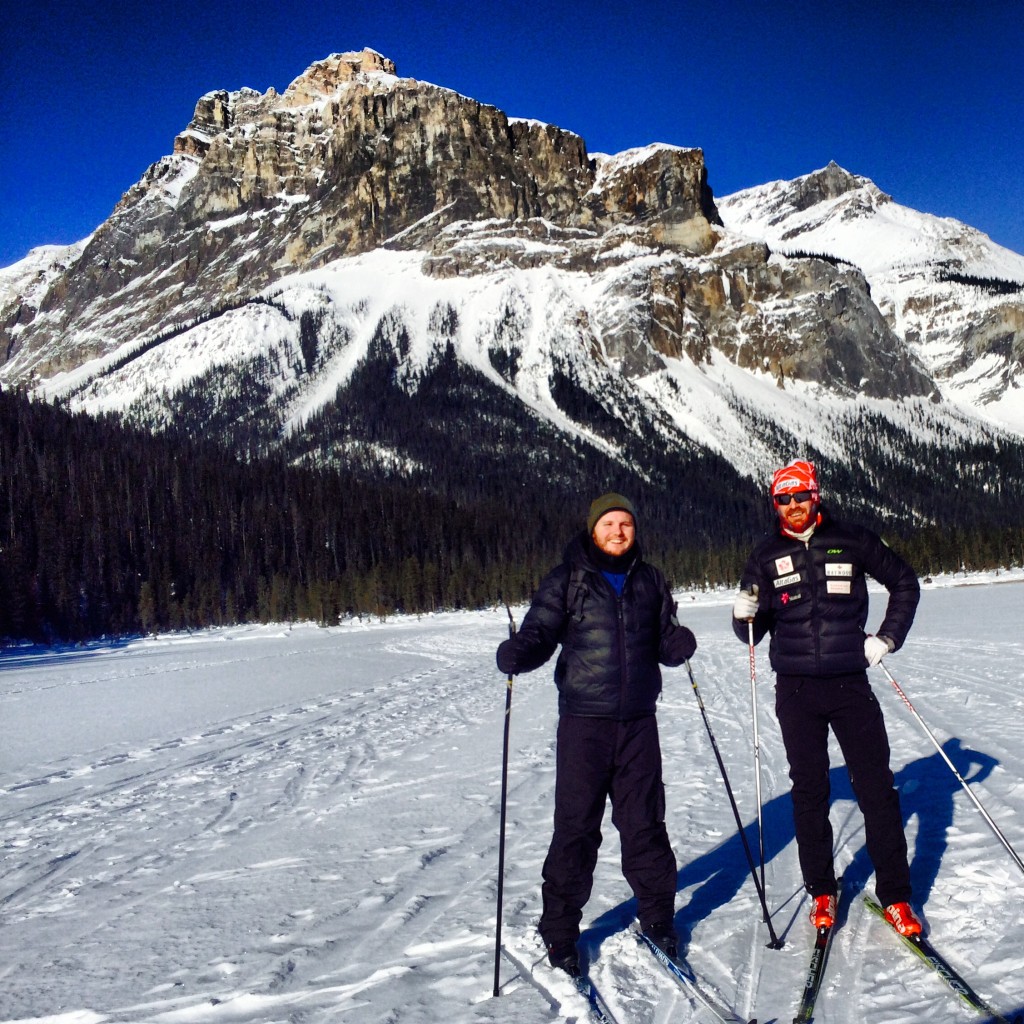 If I were to describe what cross-country skiing is like, itâ€™s sort of like skating, but itâ€™s a lot harder to fall. The boots are also infinitely more comfortable the ski boots that you wear when youâ€™re going downhill skiing. Emerald Lake was actually a great place to learn because of the variety of courses.Â  There were lots of places like beginners like me to get started, but there were also some fantastic intermediate trails that I hope to try out sometime. Â But unlike downhill skiing, when youâ€™re starting out, youâ€™re not faced with the concept of going down the side of a mountain.Â  Itâ€™s more like getting from one point to another.

Even though the temperature flirted with -30 degrees for most of the day, Goldsack and Jeffies (FYI: in sports you call people by their last names) were not only up for the challenge of skiing in frigid temperatures, they were also up for teaching me.Â Â  We decided to â€œattackâ€ the Alluvial Fan, which takes you across the frozen lake into the snow filled bowl of Mount Cameron, which is basically one of the easier trails, but I also like to think of it as one of the nicest trails considering the vistas you pass along the way are stunning. 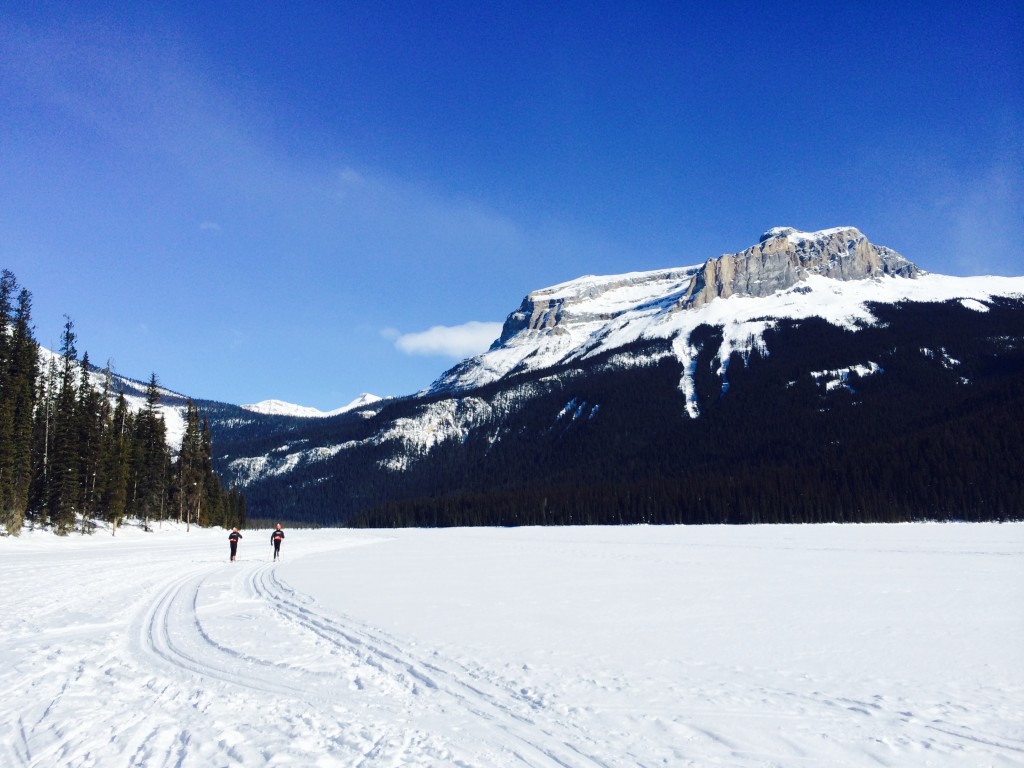 After a super quick lesson (do â€œthisâ€, donâ€™t do â€œthatâ€) we were on our way, which was totally fine, because I think when youâ€™re just starting out in the sport of cross-country skiing, I think you have to get a feeling of the motion of the ocean, if you know what I mean. Throughout our nearly three-hour trip, thanks to the guysâ€™ advice I really started to feel good about my career in cross-country skiing.

Thatâ€™s not to say that Iâ€™m heading to the Olympics in 2018, far from it. I still fell four or five times, but I was trying a new sport, thatâ€™s totally expected. Plus it was so easy to get back up, the inconvenience of falling was greatly reduced when I knew I wouldnâ€™t have to make a production the size of a show on Broadway just to try and stand up.

Actually, halfway through my sojourn around Emerald Lake, I realized I was having a lot of fun, mostly because we had the lake to ourselves. The advantage of going to a remote location is that you donâ€™t necessarily feel the pressure to be that good, because no one is around to see you. Plus, you get to try out different forms, without worrying that youâ€™re creating a line of people behind.Â  And, if all else fails, because I was skiing at a near deserted location, but a hotel was always visible, I knew if I wanted to, I could give up and just go have some beer by the fireplace. But, I didnâ€™t give up and I still had some beer by a fireplace, the best of both worlds. 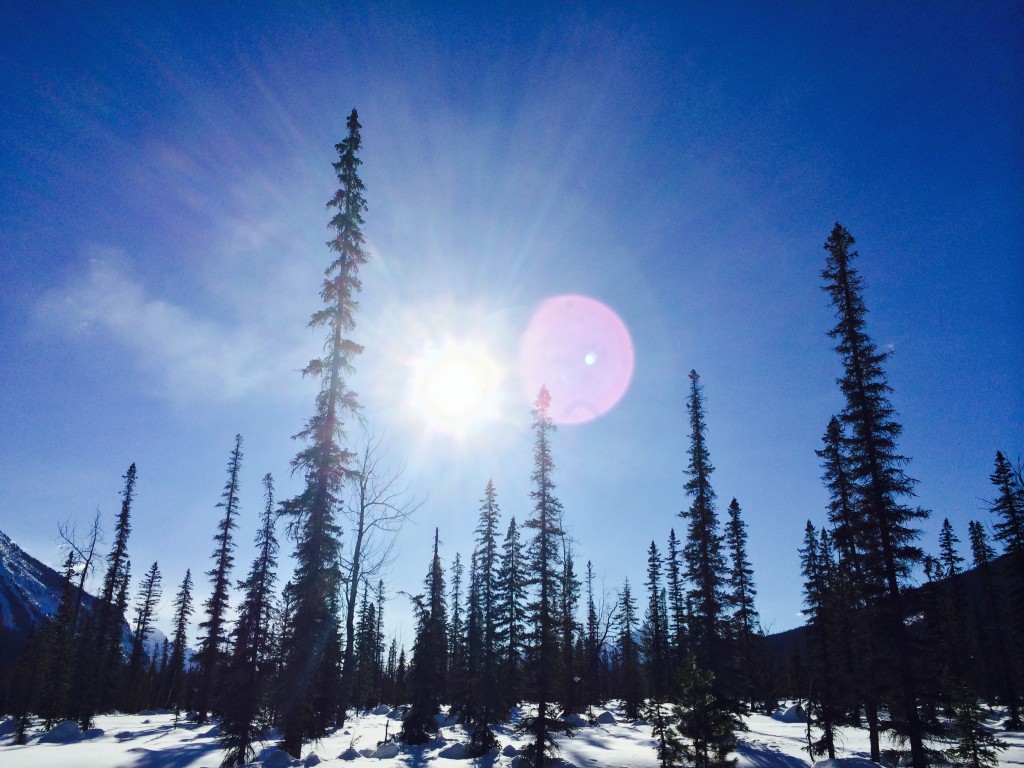 Because you are in such a remote location of B.C and you canâ€™t rely on technology to help ease the awkwardness of meeting new people. Luckily, learning from Olympian Drew Goldsack, also came with a whole careers worth of interesting things to talk about.Â  On the eve of so many of his friends competing in the Olympics, he told me that he was as nervous for his friends as we was when he competed, which makes sense, considering that his friends are the people heâ€™s trained alongside for years. Â I also learned about the training it takes to get to the Olympics and I got a better understanding of the dedication it takes. Going into the Games, it was awesome for me to have that perspective, it made seeing someone win and/or lose that much more emotional. 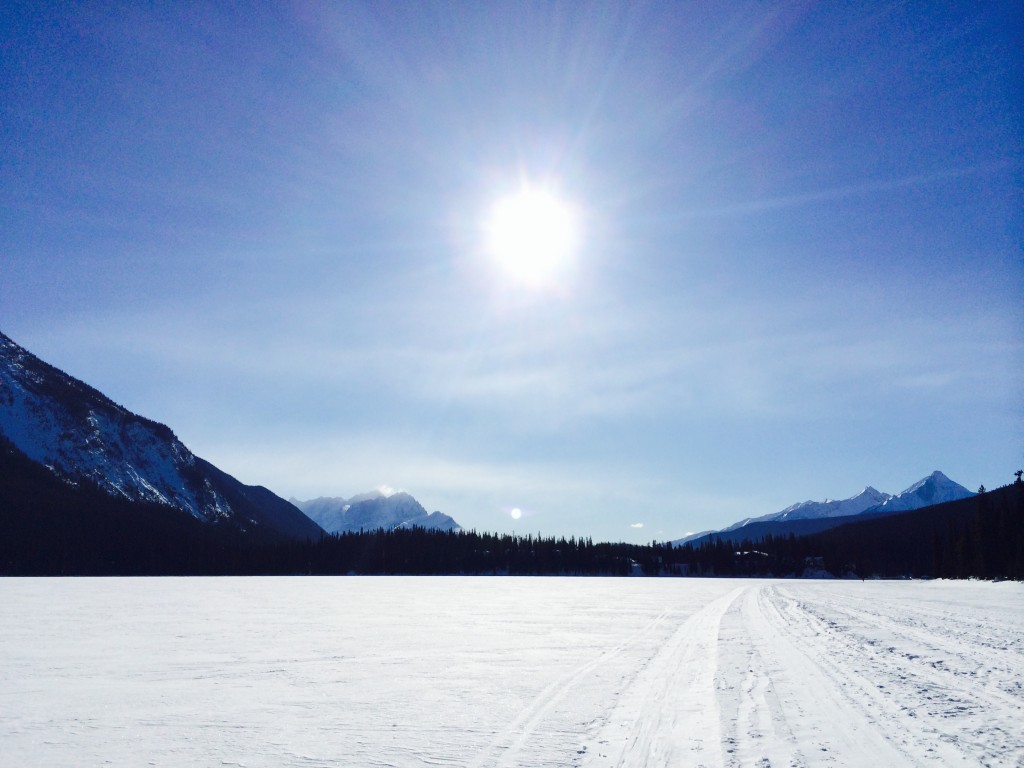 It also made me want to take my cross-country skiing adventure on seriously. Not that I wasnâ€™t already, but I started to concentrate more and more and really got a sense of how addictive the sport could become.Â  And, letâ€™s be honest, there were a lot of breaks because one does not sit behind a computer as much as I do and then get up and just ski for 8 kms without issue.Â  During these breaks we couldnâ€™t help but marvel at the mountains, the lake, the blue sky and the historic Emerald Lake Lodge, which was built in 1902 and has been completely updated to meet our modern needs but still has an abundance of all the things you need to get away from it all.Â  It was probably one of the most remote experiences Iâ€™ve ever had and I couldnâ€™t have been happier.

After about three hours of skiing, chatting, taking photos, falling, laughing and having an amazing time, I was happily exhausted. For the first time in my life, I had likely moved every single one of my muscles and I couldnâ€™t have been happier to have done so. Â While I might not ever make the Olympics, I did learn that Iâ€™m okay at least one sport and thatâ€™s probably enough for me. 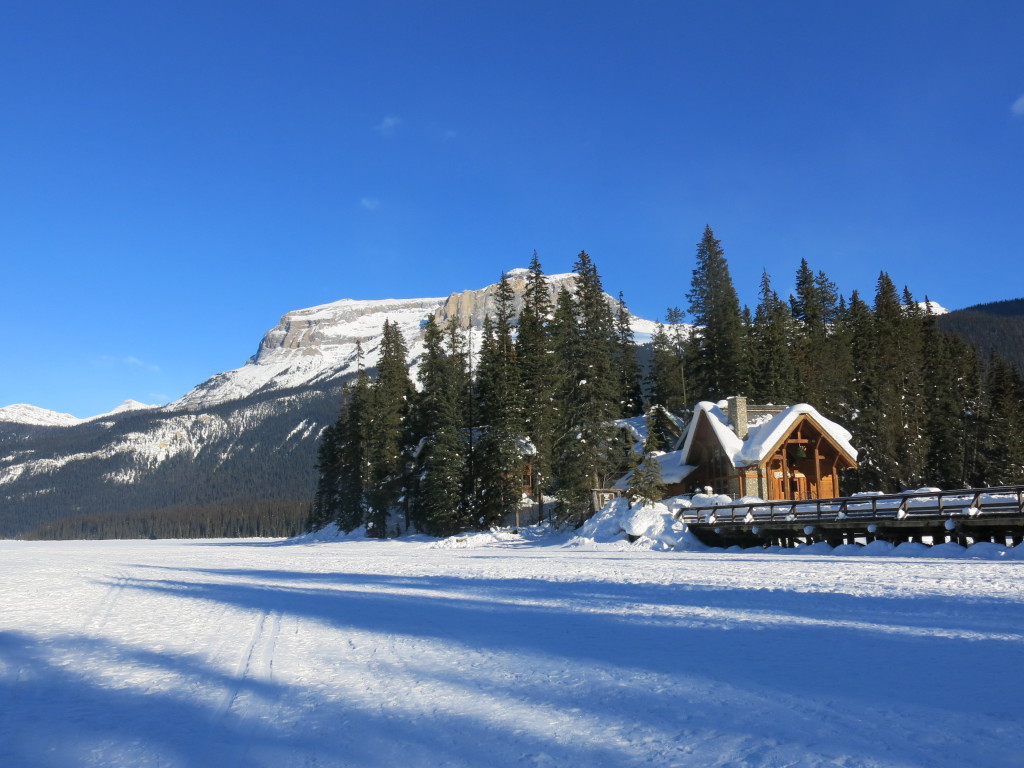 To say the Emerald Lake Lodge is nestled on the edge of the lake is not an exaggeration. 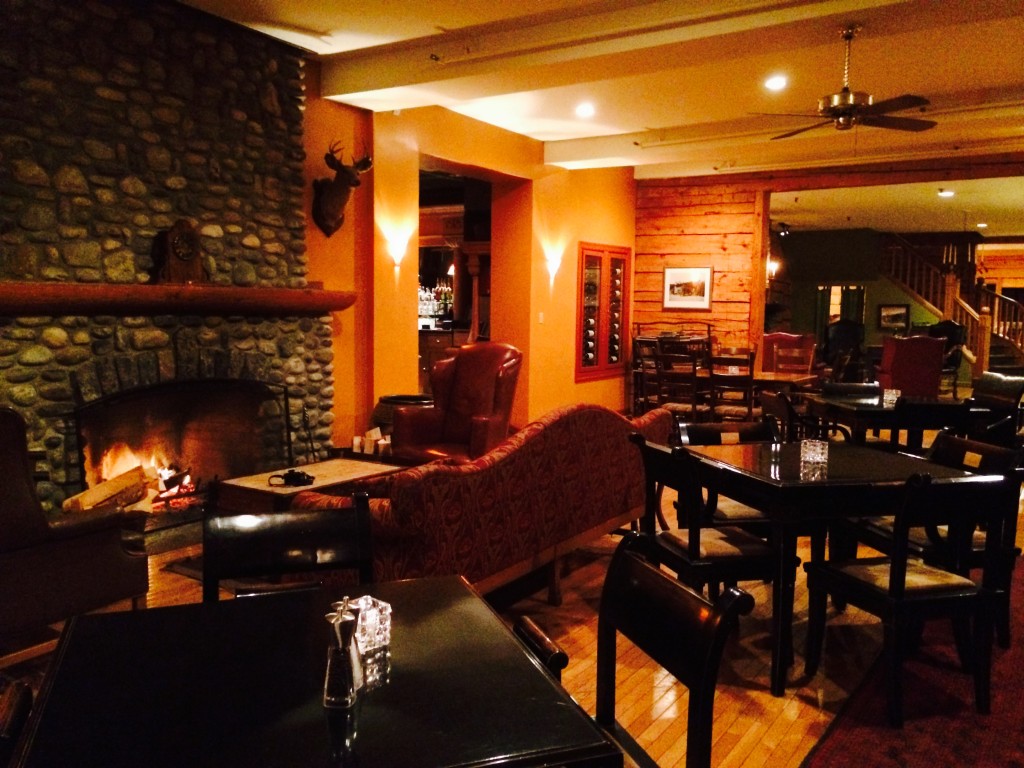 Fireside lounge inside the lodge. 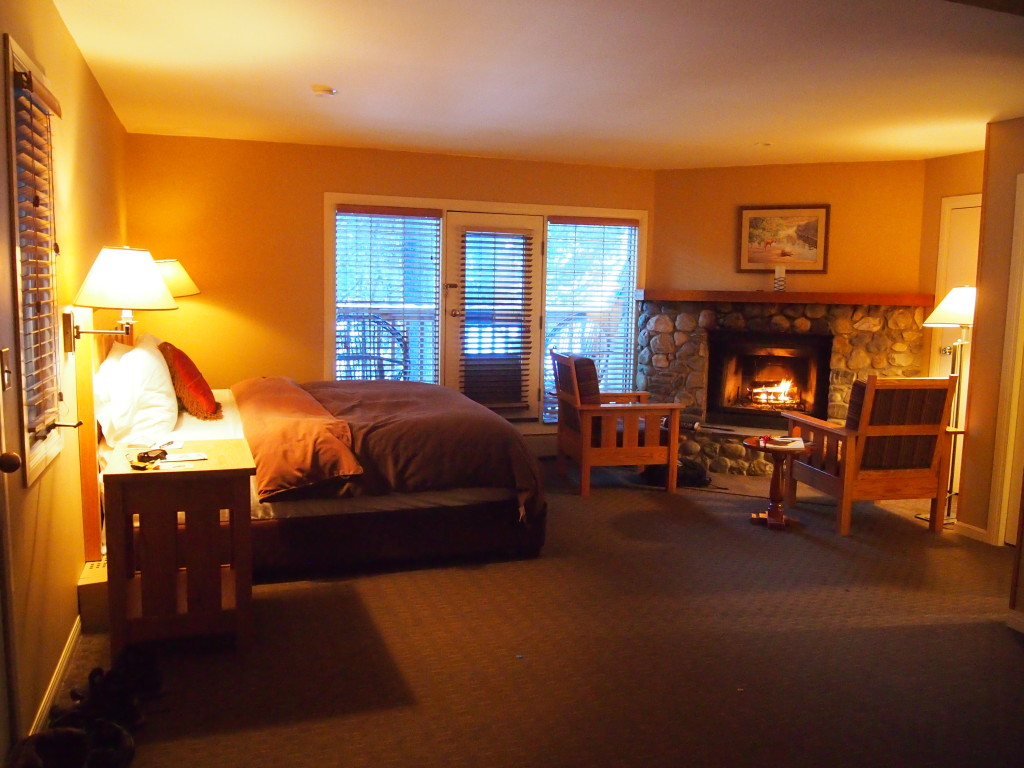 The cozy rooms made for a perfect place to warm up and unwind after a day of cross-country skiing. 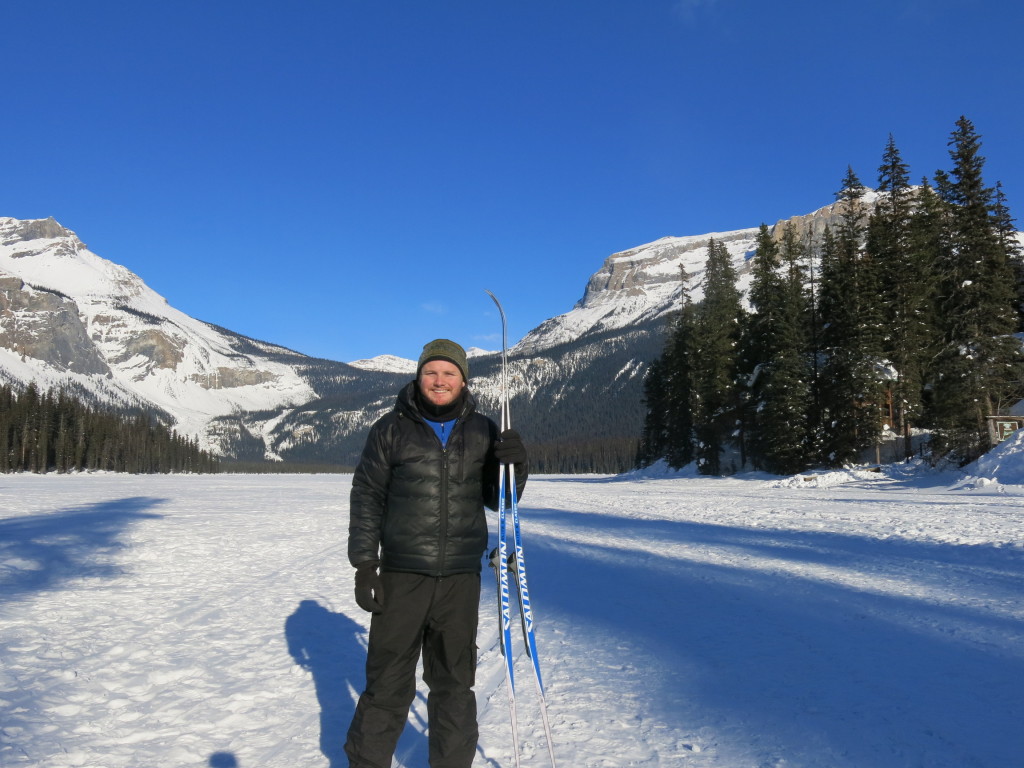