Travel: Looking for love in all the right places!

Let’s just put everything down on the table. I was an early supporter of The Bachelor. I remember it in its first few seasons, me and some friends would get together every Wednesday night (yes, that’s when it originally aired) and watch guys like Alex, Aaron, and Andrew (I didn’t even have to Google those names) sort through dozens of girls looking for love. Those days were different, back then, we still believed that reality TV meant that it was real. It also meant that those cast in the show were actually looking for love, not a show on their own. Ah… yes, times have changed.

But, one thing that hasn’t changed about the Bachelor is what has always been the best part of the show: the stunning destinations. Whether it’s a tropical island, unbelievable rooftops, or a helicopter ride around the Rocky Mountains, regardless of how you feel about the show itself, The Bachelor and its spin-off, The Bachelorette, often provide those who are looking for a romantic getaway with plenty of ideas.

The cool thing about watching the show here in Alberta is that, one of the show’s most used and romantic destinations is approximately 45 minutes from my kitchen. Even the most casual of viewers must have noticed that, over the past 28 seasons, Bachelor and Bachelorette producers have used Alberta’s Rocky Mountains as the perfect setting to film those looking for love… or, at the very least, an appearance on Dancing With the Stars, countless times.

But, how often do we take advantage of it? Sure, we go for hikes or a nice dinner, but, to splurge and indulge in a full romantic adventure like we’ve seen on TV so many times before? It doesn’t really happen. Especially for people like me, who consider someone getting me layered butter on my popcorn a romantic.  Now, I don’t talk about my personal life often, but, after a busy start to 2014, my boyfriend and I were looking to get away and just spend some time together, and, specifically, away from our laptops. Whether we realized it or not, our romantic sojourn turned into basically an episode of the Bachelor, minus the most shocking rose ceremony of all time. We’d check in to the Banff Springs Hotel, walk around the grounds, have a romantic dinner, then the next morning, enjoy the Willow Stream Spa, and cap it off with a heli-snowshoeing adventure.

Romance in the Rockies. Excited to wine and dine at the @FairmontBanff tonight. #ExploreAlberta pic.twitter.com/ohiRJhu6HH

Because I worked at a hotel for eight years, I had been lucky enough to stay at the Banff Springs before. (I’ve said it before and I’ll say it again, having a part time job that comes with hotel discounts is the best decision you’ll ever make.) But, this trip to the Banff Springs was a bit different because, we had decided to take a few days off of work and enjoy the hotel during the week, which, if you’re able to do, is something that you should strongly consider. The Banff Springs is always nice, but during the week, when some families aren’t there treating it like a Chucky Cheese, it’s even nicer. The long marble hallways were quiet, the restaurants weren’t full, we pretty much had the heated outdoor pool to ourselves, meaning, that I didn’t have to share the pool noodles, and asking for a room with a view is easier when the front desk likely has the inventory. We all take vacation days to go places far away, so, why not do the same to go to a place closer to home?

I’d say, out of all the things we did over our trip to the mountains, the spa was the thing that was least like me. I get why people like them, but there’s something in my DNA that prevents me from ever thinking about letting myself truly enjoy a spa experience. If you told me, “Hey Mike, would you like a bag of chips and some Deep and Delicious cake or a day at the spa, I would be eating those chips within seconds.” But, that also doesn’t mean that, if given the opportunity to enjoy a place like Willow Stream Spa, I won’t lap up every second of relaxation. Given what I told you about my relationship with spas, I’m no expert, but I can’t imagine there being another spa like Willow Stream out there. Honestly, the robes, the massages, the cucumber water, the mineral pool, the hot tubs, all of it was just too much, but in the best way possible. I hear of people who go to this spa all the time, and I can definitely understand why. Also, because I love a good value, here’s a tip: When you get a treatment at the spa, you also get access to the area from open to close, so, if I could have, I would have stayed until the janitor came to turn off the lights. Since my boyfriend and I were looking for a getaway, the no-cell phone policy was also appreciated. In fact, the only thing that interrupted my relaxed slumber was the sound of my own snoring during the massage. How romantic, right? And again, because we were there during the week, we pretty much have the whole spa to ourselves.

After a day in the hotel, we were full, rested, relaxed, and massaged. So, we next we decided to do what any other sane person would do, and went heli-snowshoeing with the fine folks of Rocky Mountain Helicopter Tours. Why heli-snowshoeing, you ask? Because, if you pick the romance package, it comes with champagne and brownies, that’s why. No, I’m kidding. It’s not just that. It might surprise you to find that I consider myself quite adventurous, it’s something that I’ve been learning about myself over the past few years, and something like heli-snowshoeing is great for a couple looking to spend some quality time together, because you’re building memories together. Plus, when you hit the inevitable turbulence that comes with flying through the Rocky Mountains, you have someone’s hand to hold.

If you’re like me and have never been in a helicopter, I can confidently tell you that there is nothing like it. Honestly, from the moment the helicopter takes off, your senses basically explode with everything that is happening around you. You’re hundreds of feet in the air, going who-knows how fast, and seeing things from an angle that you’ve never experienced before, and that’s just in the first few seconds. After the absolutely stunning 20-minute helicopter ride, we landed in a remote field, about 20kms from the nearest road, and went for a really wonderful snowshoe experience through a snow-covered forest, which is where the champagne and brownies came into play. Guys, if you ever get a chance to eat brownies and champagne after a helicopter ride, that leaves you in a completely remote spot, well, that, to me, is romance. 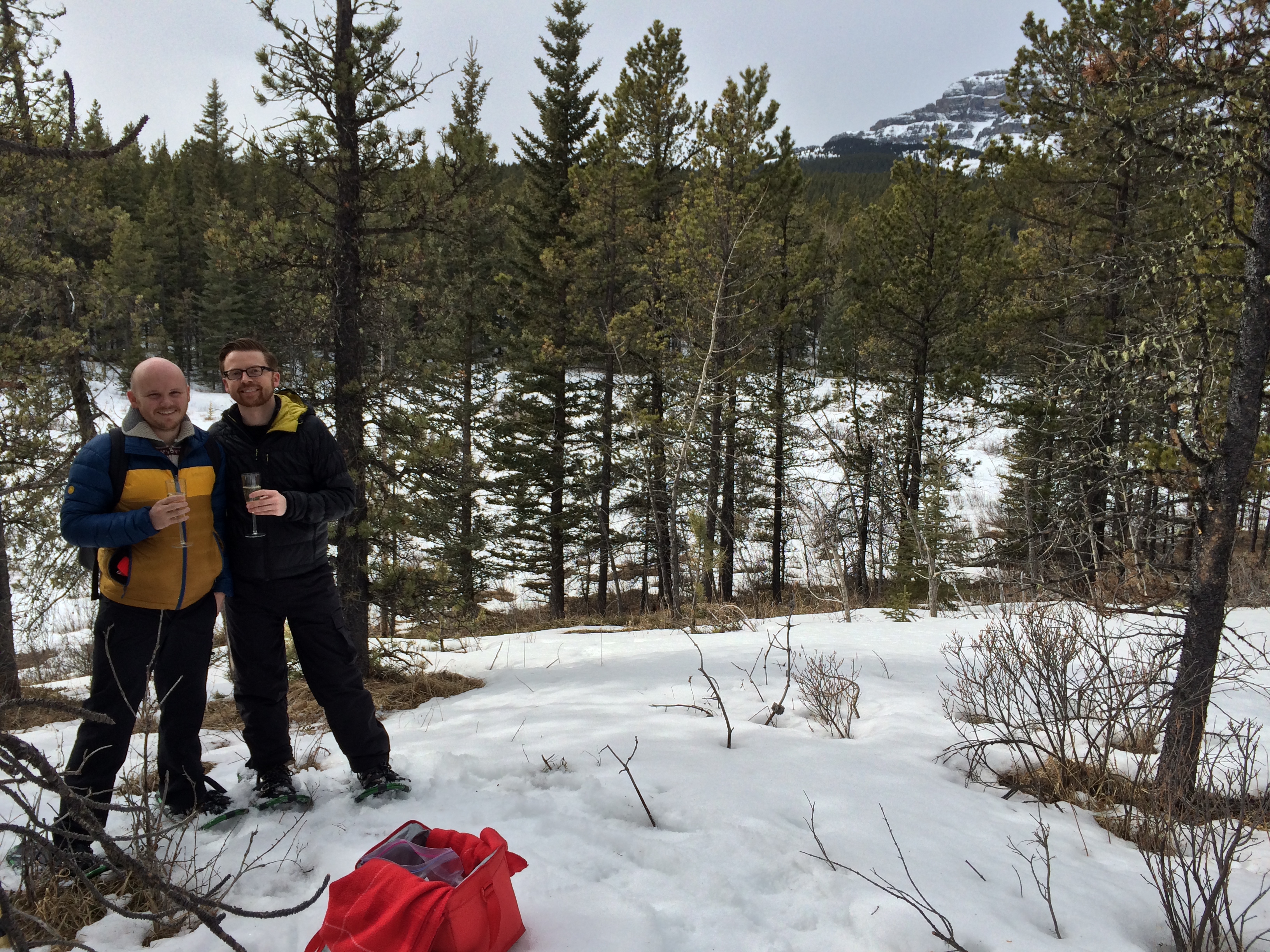 After a quick helicopter ride back, our day of romance, adventure, food, and relaxation came to an end. And the best part? We never drove more than 90 minutes. So, without having to deal with airports, maps, and the other stressors that often come with travel, my boyfriend and I were able to just enjoy what is essentially our backyard, and, more importantly, each other’s company. That’s the stuff you never see on TV, but, it’s the stuff that matters the most. 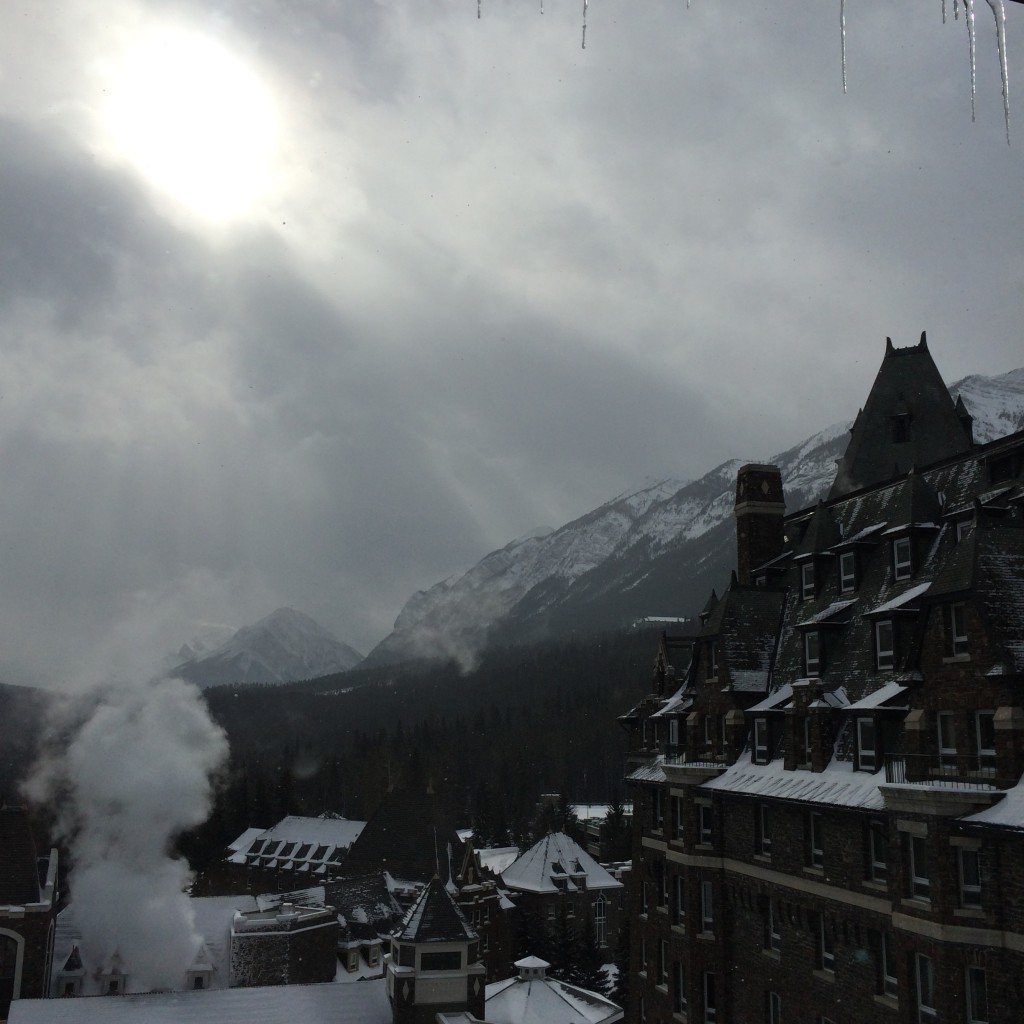 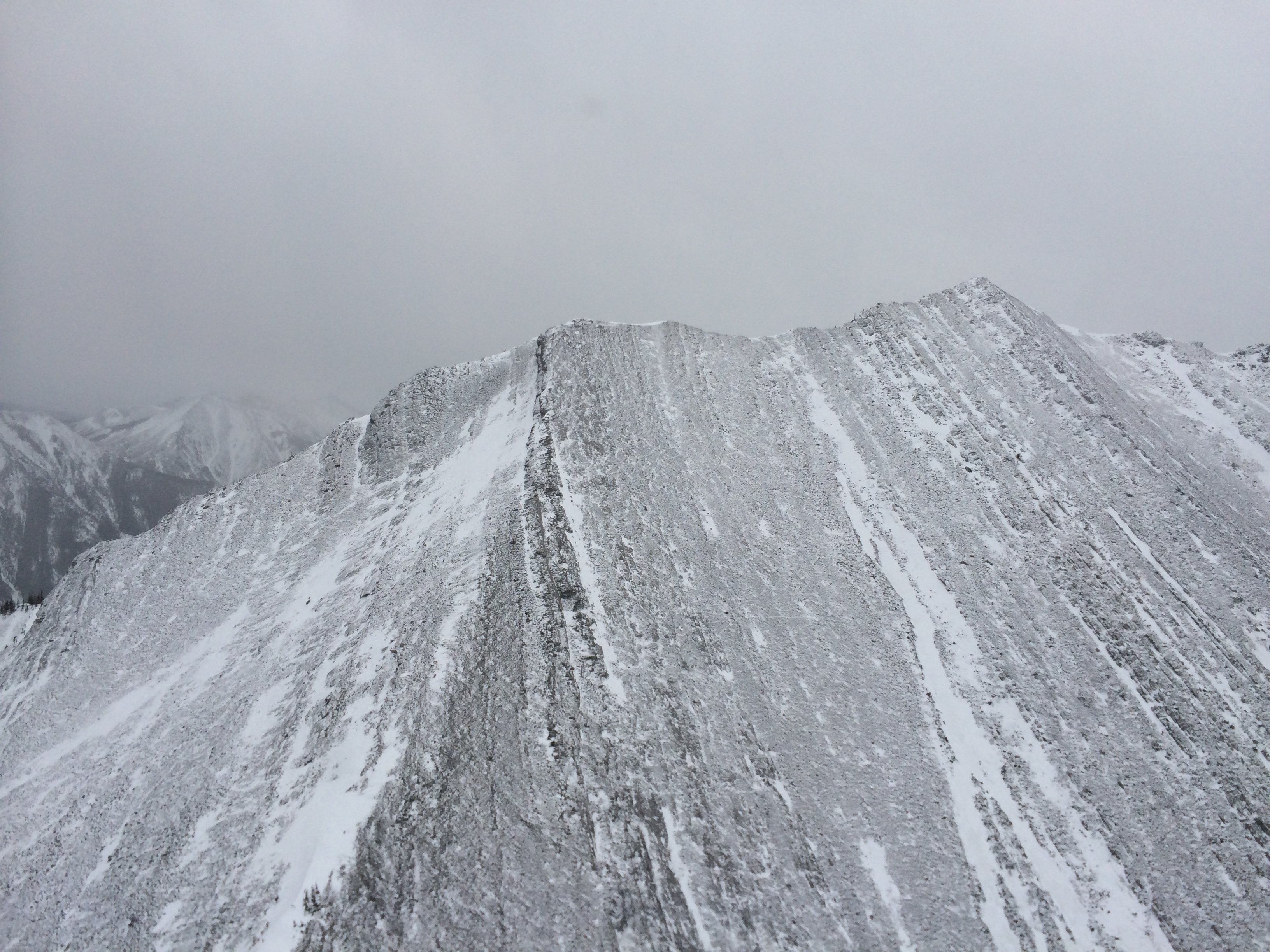 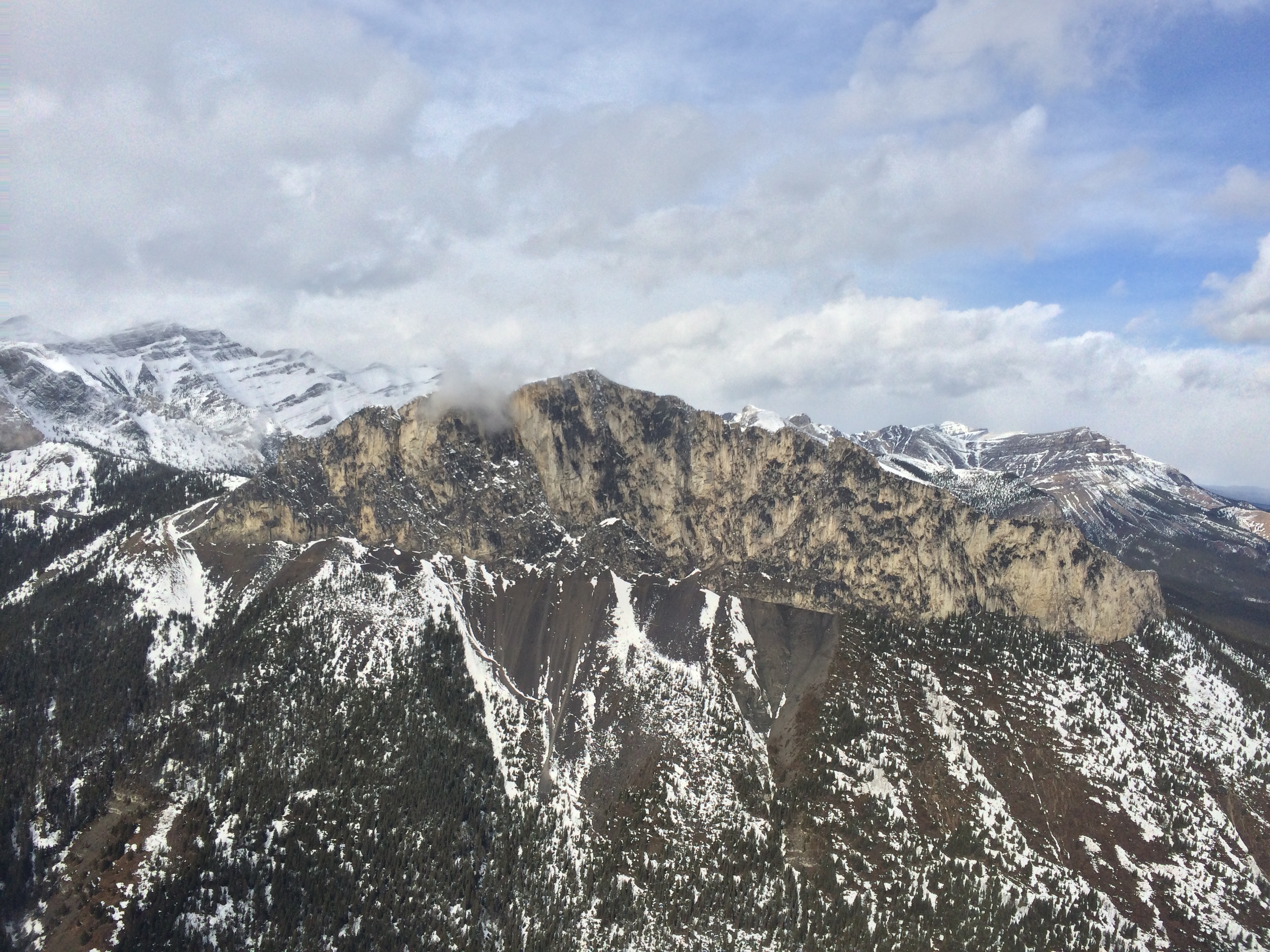 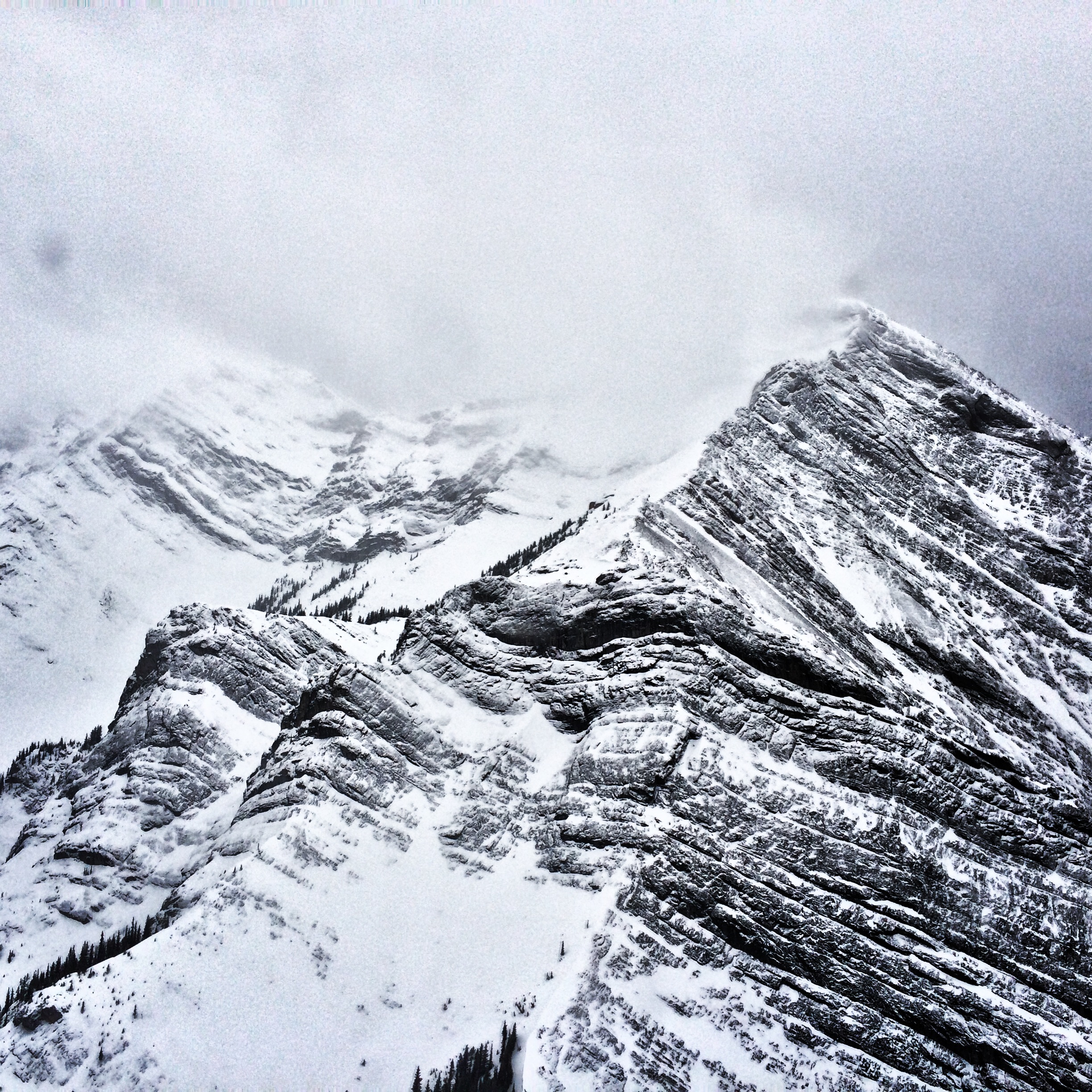