Canadaâ€™s history with trains is that of legends, or at least it used to be.Â  While never the mode of transportation it is in Europe, people would be foolish to ignore the fact that this country was basically built on the railway.Â  With the continued advancement of cars and planes, trains have struggled with adapting to modern times, with many abandoned tracks being converted into walk and bike ways. 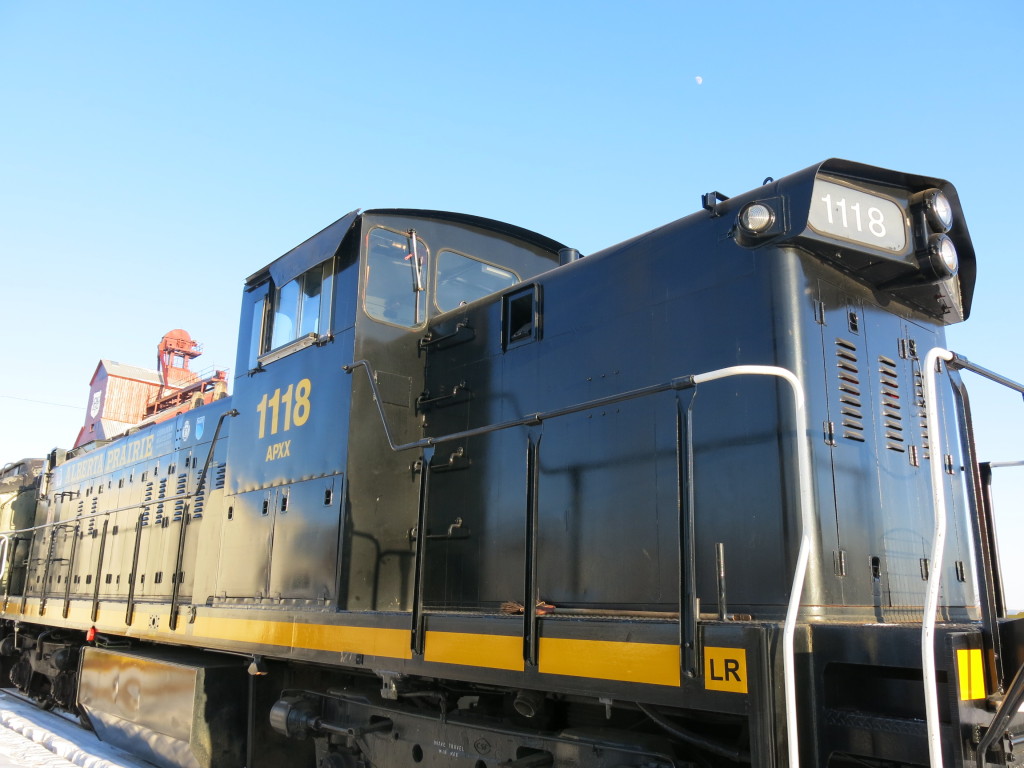 Thatâ€™s why I really wanted to check out the Alberta Prairie Railway, also known as the Stettler Steam Train.Â Â  Now, if youâ€™re like me and donâ€™t know where Stettler is, itâ€™s basically two lines on a map.Â  Drive north from Calgary to Red Deer, once you get to Red Deer, turn right and keep driving for about an hour.Â Â  Even though Iâ€™ve lived in Alberta for eight years, Iâ€™m still captivated by the prairies, so we took a little longer, I seriously canâ€™t not stop for a photo when I see one.Â  The people I travel with are all beautifully patient people, because I stop a lot. We probably added an hour to the trip.

Upon pulling into Stettler, I was immediately enthralled with the idea of an old steam train taking me from one small town to another. Mostly because Iâ€™m in a bit of Downton Abbey-phase right now and if there is anything I can do to make me feel like Iâ€™m one of the Crawley family I will most certainly do it.Â  Besides the Rocky Mountaineer, most people sort of look down on train travel in Canada. Beyond some parts of Ontario, the mode of transportation is just too slow doesnâ€™t make sense for those who are always go-go-go! 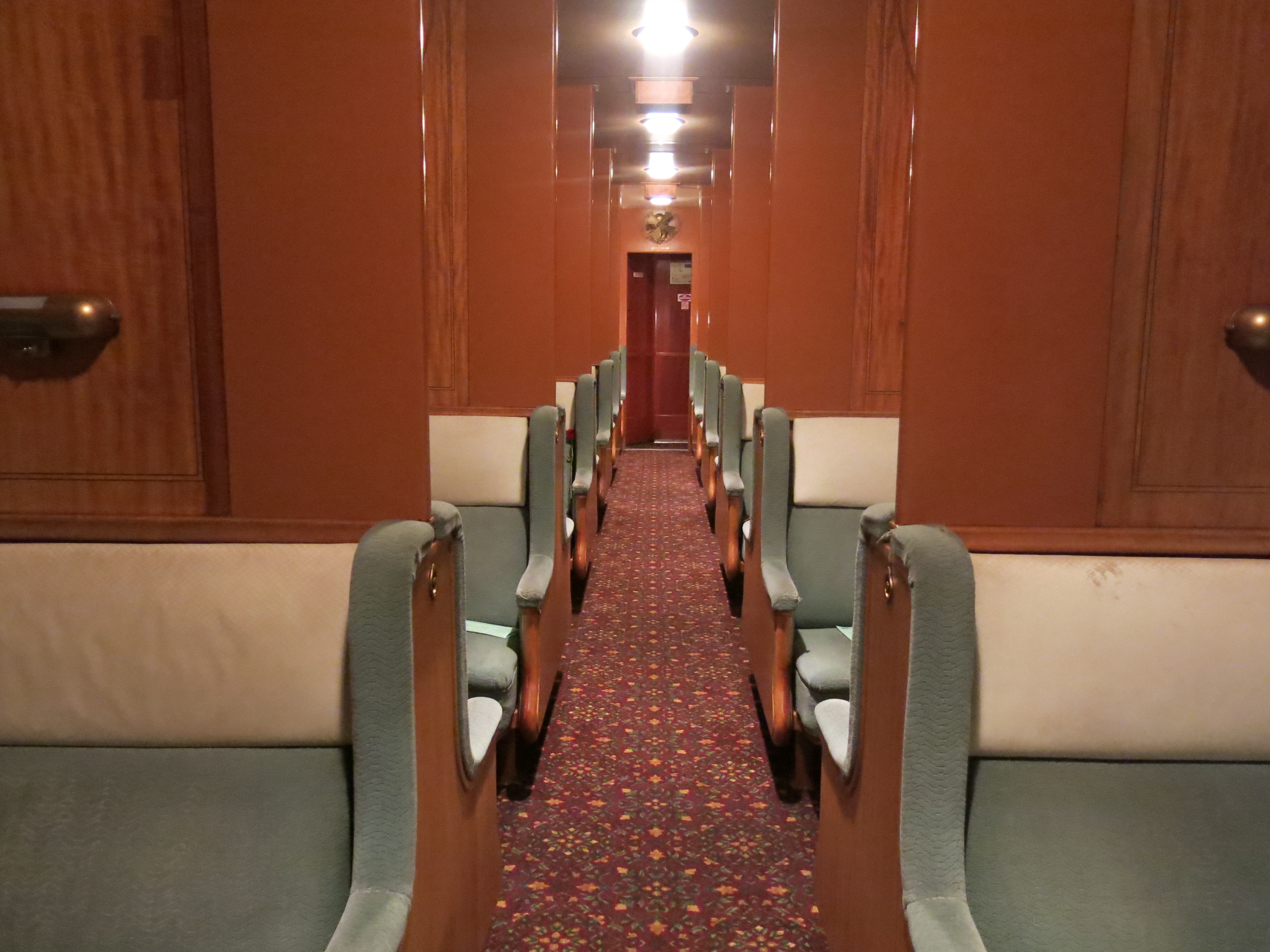 Boarding the train was just like I had imagined, with someone yelling â€œAll aboard!â€, ripping our tickets and showing us to our seats. You remember that Heritage Moment commercial featuring the origins of the Superman cartoon?Â  Yeah, it was like that. The train we were one had a few different cars and once you board, be prepared to be immediately taken back to a time that really, wasnâ€™t that long ago. Â I have a feeling they change up the carts depending on the demand, but for this particular Valentineâ€™s Day-themed trip, which was sold out, there was the dining car, which was built in the 1950s and still greatly resembles the dÃ©cor of that time. We sat in the Tracy car, which was likely the more formal of all the cars. There was another a â€œbar carâ€ which featured a full bar and a live band!Â  I guess I had never thought about a band playing on a train before, so it was a pleasant surprise. 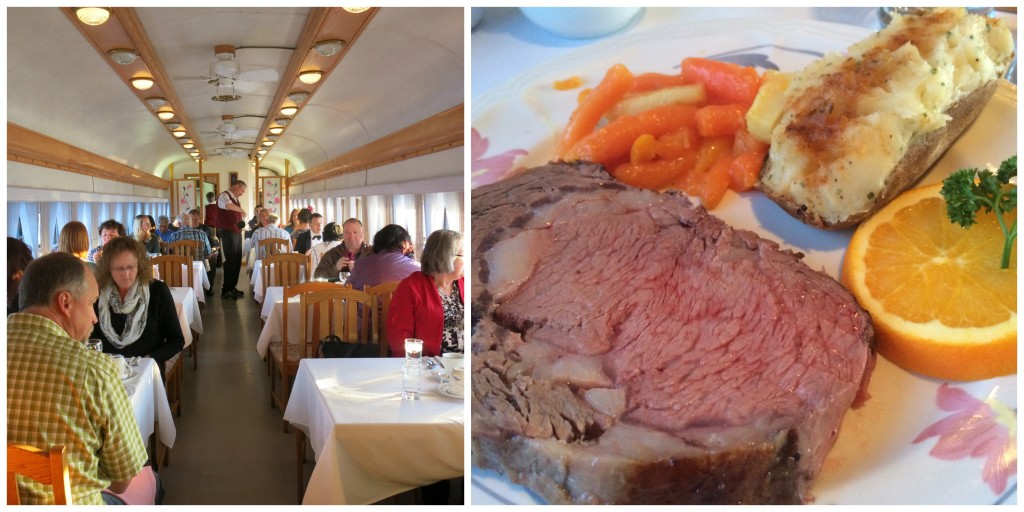 But if youâ€™re like me, you havenâ€™t been paying attention to anything since I mentioned the dining car, because you and I love food and nothing else matters when thereâ€™s food involved, letâ€™s talk about the food. Now although I love food, I donâ€™t consider myself to be a foodie at all, mostly because I love all kinds of food.Â  If itâ€™s food and itâ€™s in front of me, Iâ€™ll eat it. Unless itâ€™s parsnips, I hate parsnips. So for me, the dinner on the train was great. It was sort of like Thanksgiving dinner at your grannyâ€™s house. But if you do consider yourself a food connoisseur, then I could see how you might be disappointed by how simple the dinner was, but this isnâ€™t the Rocky Mountaineer. This is a small company that gives you a taste of how people used to get around Alberta, so eat up! 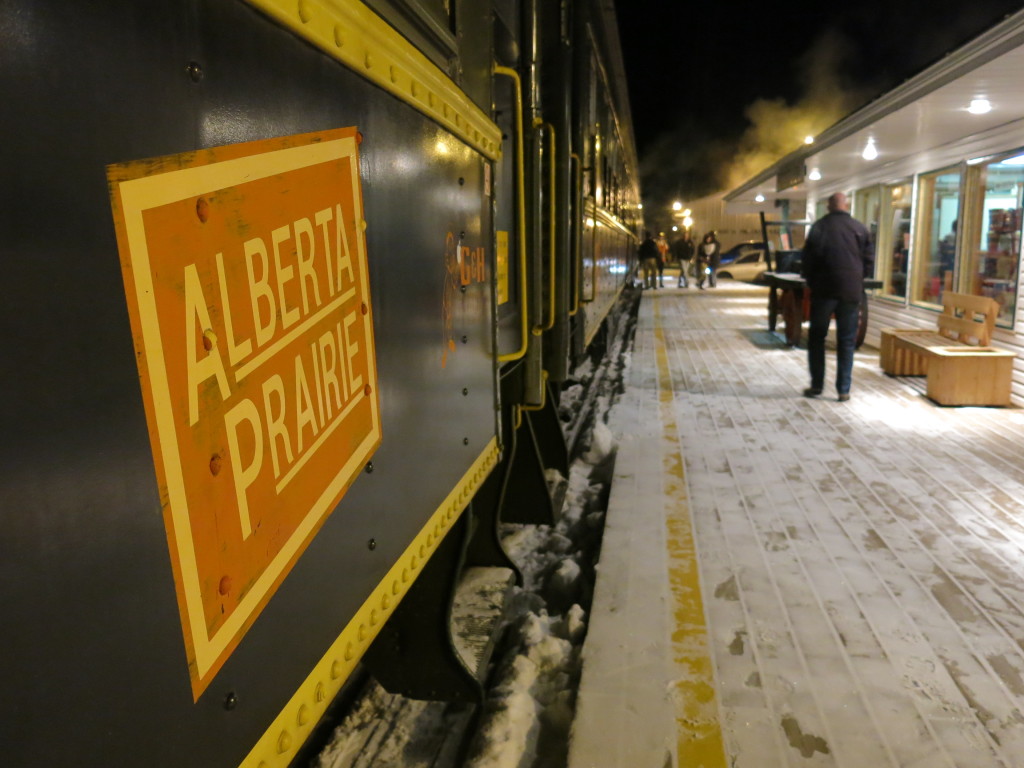 Besides dinner, the train ride also offers you a chance to really sit back and enjoy the prairies. Throughout the five to six hour trip, youâ€™re given the chance to imagine what life on the prairies is really like. I especially took note when the train passed by long-abandoned farms and other remote homes. Â Itâ€™s a peek into a life very different than mine in downtown Calgary, which I think sometimes might be a good thing.Â  Since the train moves at a fairly slowly pace, we could also easily spot coyotes running through fields and dozens, if not hundreds of deer enjoying the moonlight fields. Â But the train doesnâ€™t just pass through the prairies, it actually drops you off in them.Â  Around the two-hour mark, the train came to slow stop and let us debark in the small, like tiny, town of Big Valley, which is likely a shell of what it was fifty or sixty years ago.Â  But I love exploring those kinds of places. Passengers are allowed to explore the perfectly maintained train station and then wander the townâ€™s streets, but donâ€™t worry about getting lost, thereâ€™s only like three of them. There were also a handful of stores that opened up just for the passengers, all of them featuring handcrafted goods, antiques and fudge. (Again with the food.)Â  I really appreciated this part of the trip, because Iâ€™m not sure I would have ever visited Big Valley on my own, but as a part of another trip, I definitely enjoyed talking to a few of the people who lived there.Â  After about an hour of exploring, we got back on the train and slowly started heading back to Stettler. We spent the rest of the trip listening to the band in the bar car and pinching ourselves that we were on an actually functional train.

If youâ€™re thinking about taking a trip, hereâ€™s some quick tips for you:

The trainâ€™s busy season is the summer, when tourists from all over descend upon the small town of Stettler to experience the steam train.Â  This particular trip was a Valentineâ€™s Day trip, but most of their excursions take place between in the months of May to September.Â  During those months, thereâ€™s lots of different types of trips available, so make sure you check out the schedule. Some of are family-friendly, others are adult-only, thereâ€™s also special trips on days like Canada Day and Fatherâ€™s day. All excursions include a full course buffet meal, which is included in the fare. But be warned, there may even be a train robbery along the way. Hey, youâ€™re the one that wanted an authentic experience.

Oh and donâ€™t let the website scare you, even though it appears to be the first website ever made, everyone had the Alberta Prairie Railway was fantastic and our reservation got through no problem.Â  When it comes to websites, I guess if itâ€™s not broke, why fix it? 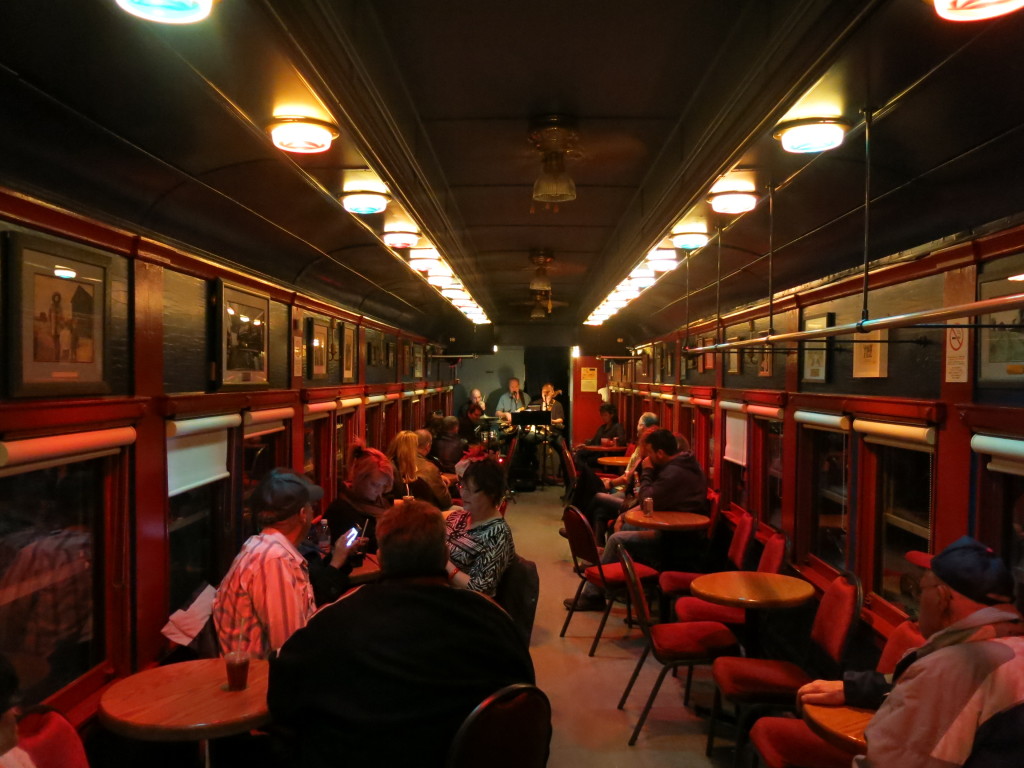 Since getting off the train, knowing I would write a post about my experience, Iâ€™ve been trying to think about who would is the Stettler Steam Train really for?Â  And honestly, I canâ€™t decide.Â  As someone who loves history, I loved being a part of something of significance to this countryâ€™s history. If you know someone who loves to take photos, the opportunity to see the Prairies on an old train offers up countless picturesque moments. Iâ€™m sure kids would be fascinated by the way their great-grandparents would have gotten around and for those looking for a little romance, Iâ€™m not sure if it gets more romantic. I, for one, plan on going back in the middle of summer. I want to experience the train when the days are a lot longer and yes, see if I can take on the robbers. They canâ€™t be that scary, can they? 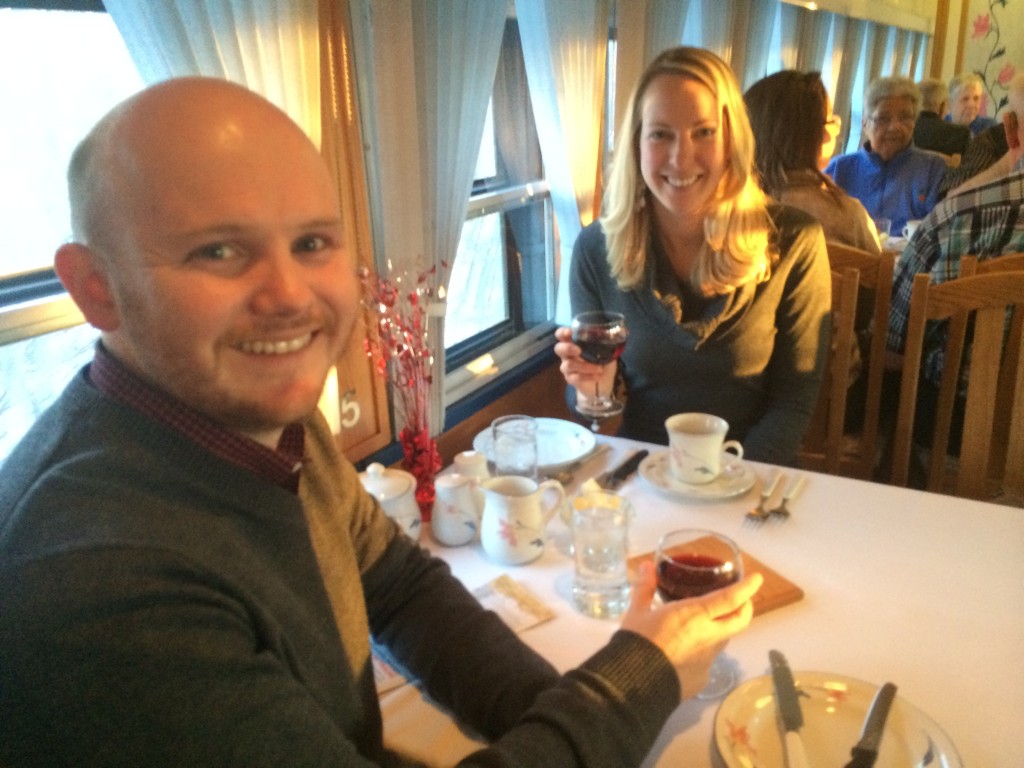 The train ride offered up a great way to catch up with my friend Angie! 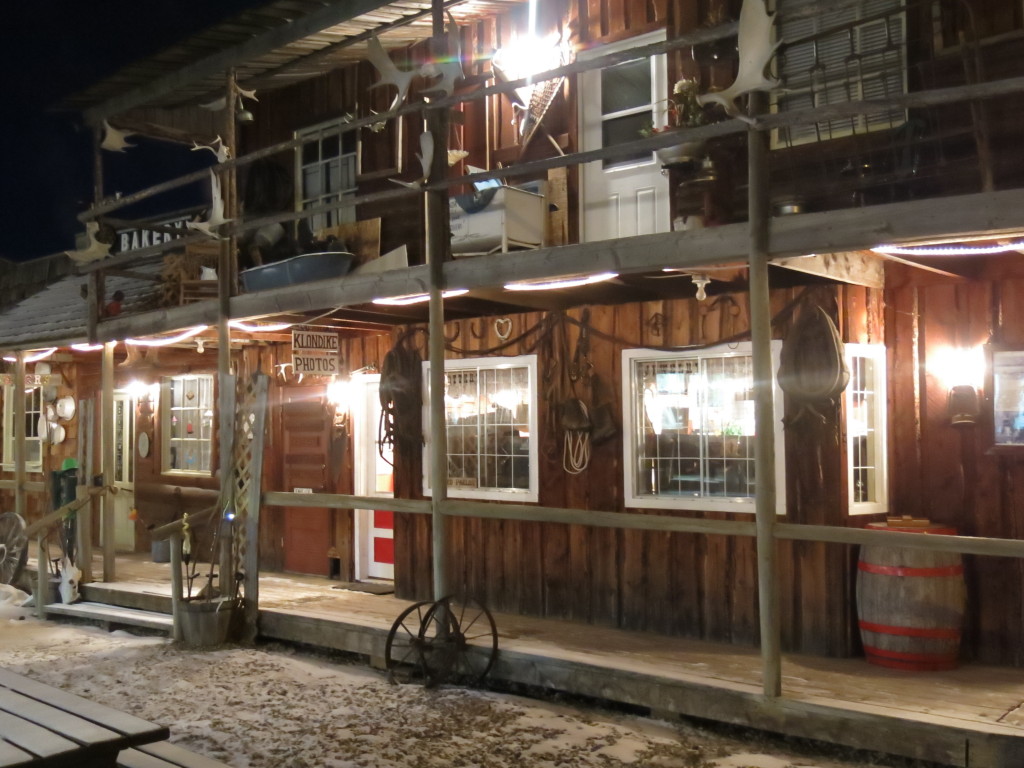 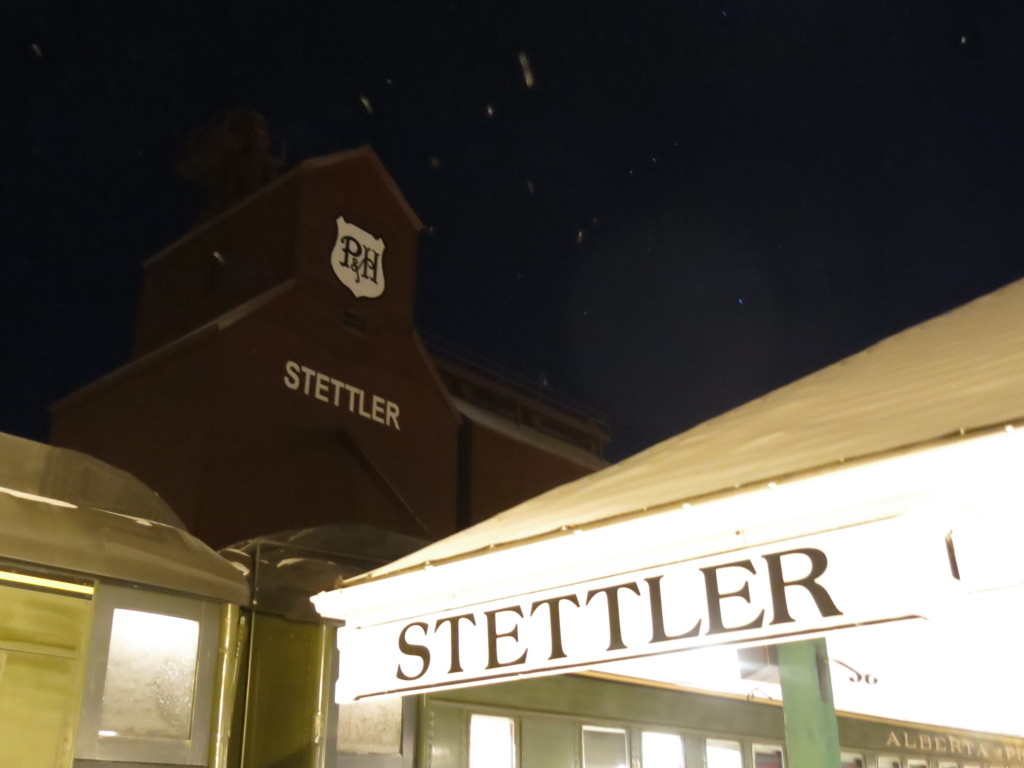 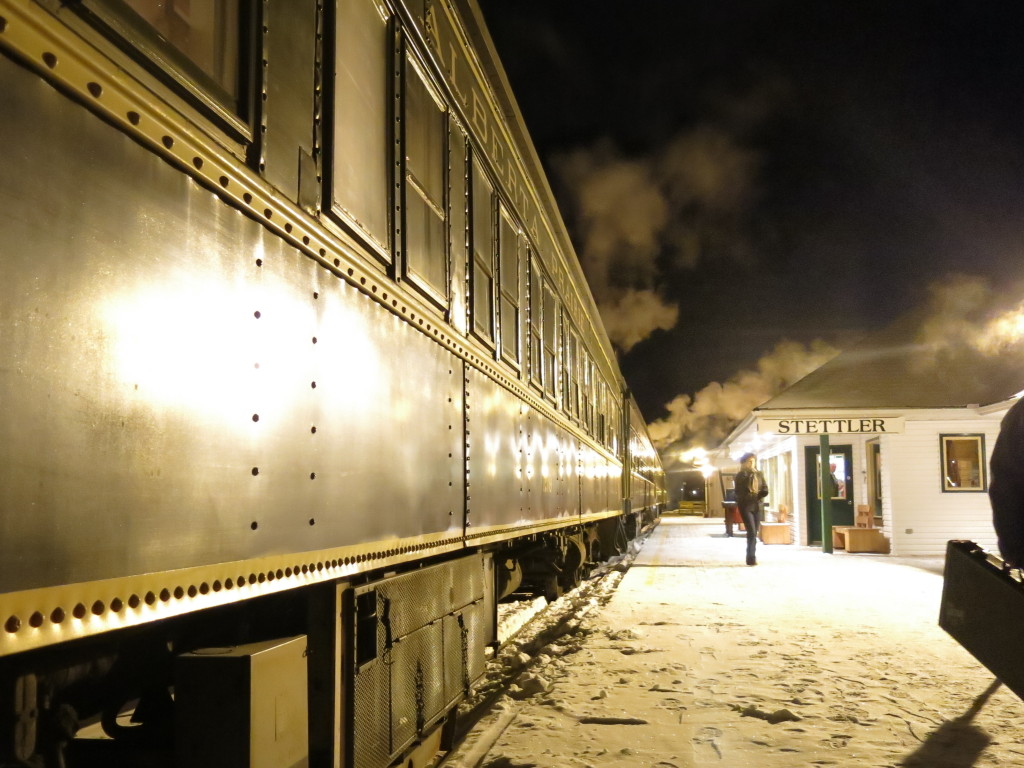 The train’s last passengers hurry into their cars 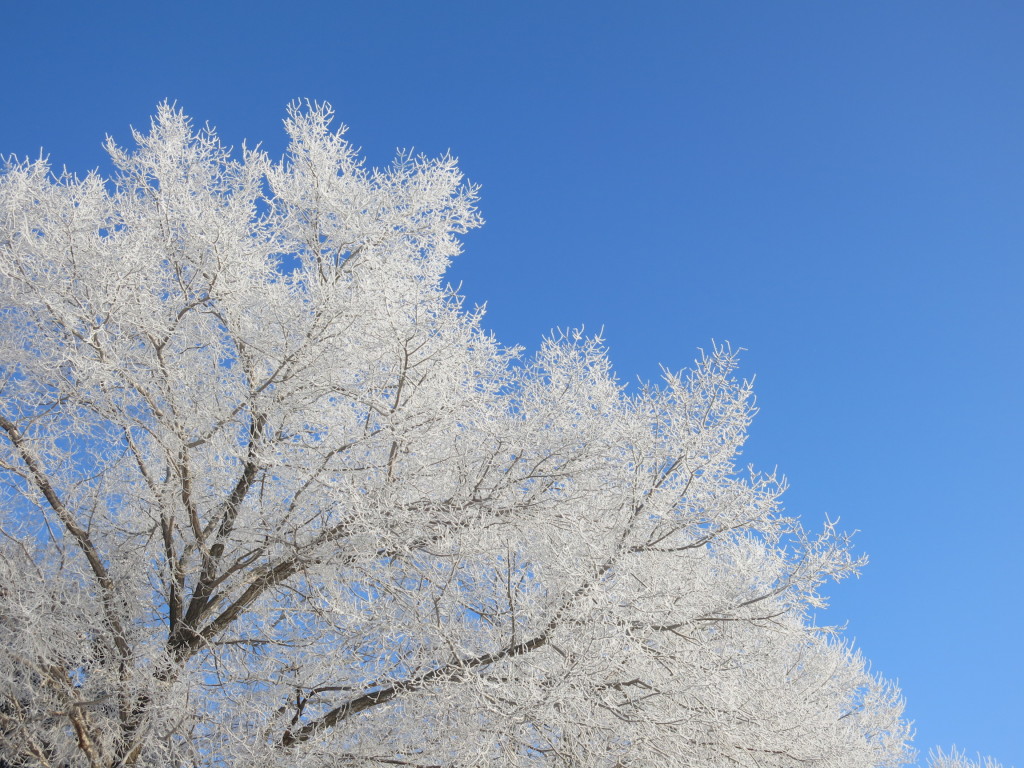 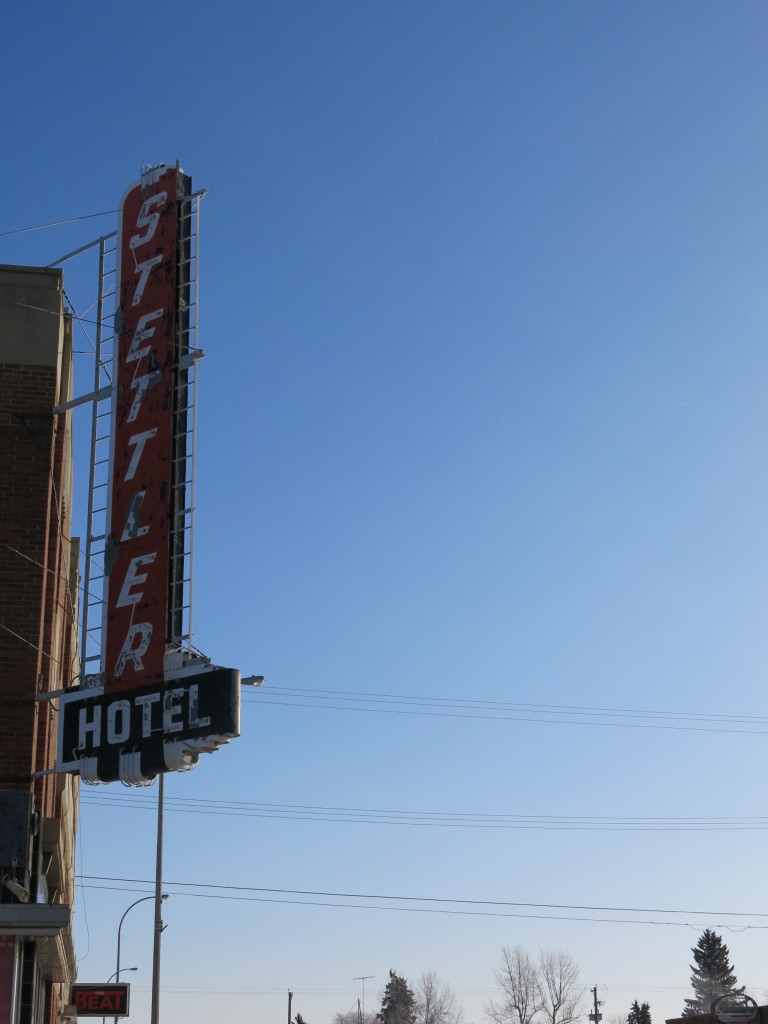 Signs of Stettler’s history are abundant in the town’s core. 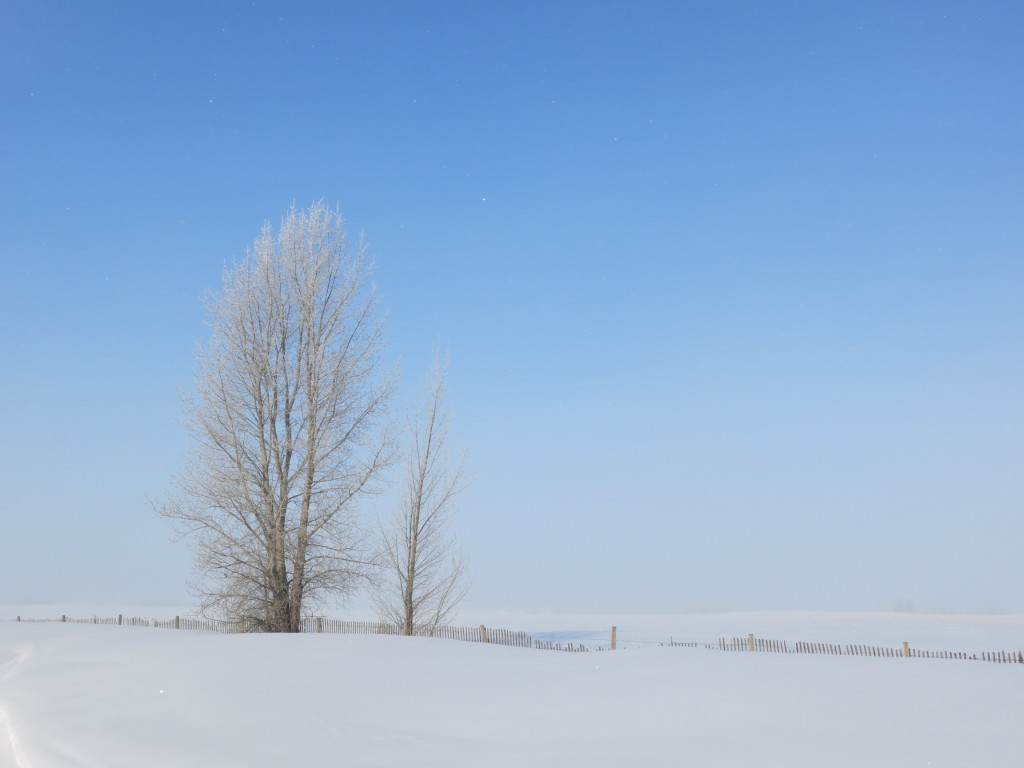 Make sure you leave time to take photos along the highway. 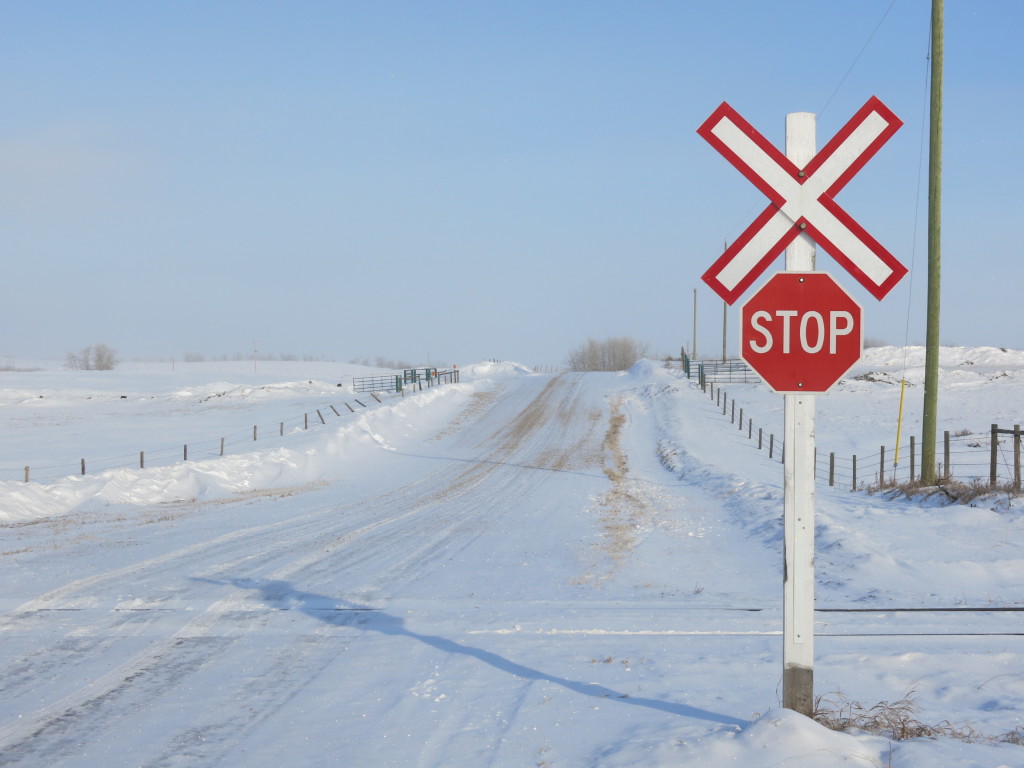 Red and blues are common sights along the back roads to Stettler.