Travel: A holiday on horseback turns into much more!

You may have noticed that Iâ€™ve had a pretty wild summer. Between the via ferrata, paddleboarding, rock climbing and hanging out with bears, Iâ€™ve been spending much of this summer being scared.Â  But rarely have I been nervous. Because at the end of the day, I knew I could do these things, even if I hadnâ€™t ever before.

My friend and I recently went on a fantastic two-day horseback riding trip in Banff National Parkâ€™s back country.Â  The tour was with Holiday on Horseback, which also offer horseback trail rides that range from one to seven hours and backcountry trips that can last up to six days! Wanting to get away, but not for too long, we opted for the two-day adventure, even if I was incredibly nervous about it.

Riding a horse doesnâ€™t make me nervous, I already did that this summer too. Iâ€™ve been on a horse lots of time, but never for two days and never in the backcountry and never without an internet signal.Â Â  I think the last one made me the most nervous.

Whatâ€™s funny about these types of trips, is that I found myself so nervous about staying in the back country and not having an internet signal, I never once considered this trip could be relaxing.Â  After all, does the idea of being on a horse for a ten-mile trek likely sound relaxing to anyone? Â But honestly, it was probably the most relaxing thing Iâ€™ve done in as long as I can remember. Sure it gets a little sore, but so does pretty much every outdoor activity.

What made horseback riding relaxing was just how peaceful the whole two days were.Â  You start off with some of the most beautiful views of Banff youâ€™ll ever see, then, as you weave in and around the banks of the Bow River, you really get to get a sense of the animal youâ€™re with. My horseâ€™s name was Info and he was an alpha man. Like me, he wanted to lead and act like he was the boss. This type of information is important, youâ€™re about to spend two days with him.

I sort of equate horseback riding to airplanes; itâ€™s something weâ€™ve totally taken for granted. For thousands of years, explorers, hunters and warriors have been using horses to travel the globe and now itâ€™s just something that we know has always existed. Itâ€™s amazing to think that the whole world we know now was discovered mostly on horseback.

I know what youâ€™re thinking, â€œWhoa, thatâ€™s surprisingly deep for a post about horseback riding.â€Â  Which I would agree with, but itâ€™s also a sign of just how relaxing the trip was. For five hours a day, I was just with a horse and my thoughts. Not to mention the repetitive motion of the horse walking, which literally put my friend to sleep.

To be honest, it took me a while to realize that I was relaxing. My life, our lives, are so go, go, go. That when Iâ€™m forced to sit somewhere for any amount of time, the energy seems to only build in my veins, as I look for a way to expense it.Â  Plus, Iâ€™ve been having so much fun on Instagram lately, Iâ€™m just constantly looking for things to take photos of.Â  And while a lot of the trip is picturesque, as you begin to move away Bow River, a lot of the trip is in thick woods and you can only so many photos of horseâ€™s butts, before you put your camera away and just enjoy the peace. Thatâ€™s something I almost never do.

For me the highlight of the trip was the Sundance Lodge, which, while I loved bonding with Info, was a welcome site after five hours.Â  The lodge is as remote as they come, but in terms of backcountry lodges, was probably the equivalent of the Chateau Lake Louise.Â  The cabin is solidly build and huge. Itâ€™s comfortable and everyone gets their own rooms. I was not expecting that. I also donâ€™t think this is the norm for backcountry lodge, which made the experience even more special. Sundance Lodge sits on the edge of a beautifully relaxing creek and as soon as I saw it, I instantly thought about how nice it would be to fall asleep to the cool mountain air and the sounds of a bustling creek. As someone who lives in a busy downtown neighbourhood, it was perfect. And I donâ€™t just mean it was nice, I mean, it was perfect.Â  Iâ€™ll probably never have a good as sleep as I did that night. That alone was worth the ten-mile ride.

The other surprisingly great thing about the Sundance Lodge was the food. I donâ€™t know what I was expecting, but it was a hearty and delicious restaurant-quality spread for both supper and breakfast the next day. Iâ€™m pretty easy to please when it comes to food, but everyone at the cabin was raving about the food and rightfully so. It was really fantastic and it felt really good to be having a home-cooked meal, in the middle of a valley.Â  I never thought Iâ€™d ever travel so far and feel like I was home. Even now thinking about it reminds me how warm, full and relaxed I was.

After the sunset and everyone went to bed, my friend Krista and I had a great time taking in all the stars. I mean, how often can you really see the stars without any sort of light pollution. This was a rare opportunity and one that was a complete blast. I wish we could do that more often!

As we made our way back to Banff the next day, I have to admit that, as any likely addict would, I kept checking my phone to see if it had service. And it wasnâ€™t until we were just outside of the town that the sounds of peaceful sounds of horses and rivers were replaced with beeping and buzzing.Â  It seemed ridiculous to me that I thought that actually sought out those noises. I realized right then that I should have stayed longer. I should relax more.Â  I should be more like the people that spend their lives discovering the world on horseback. As it turns out, I wasnâ€™t nervous about missing my phone, I was nervous that Iâ€™d realize just how much of the world is passing all of us by. 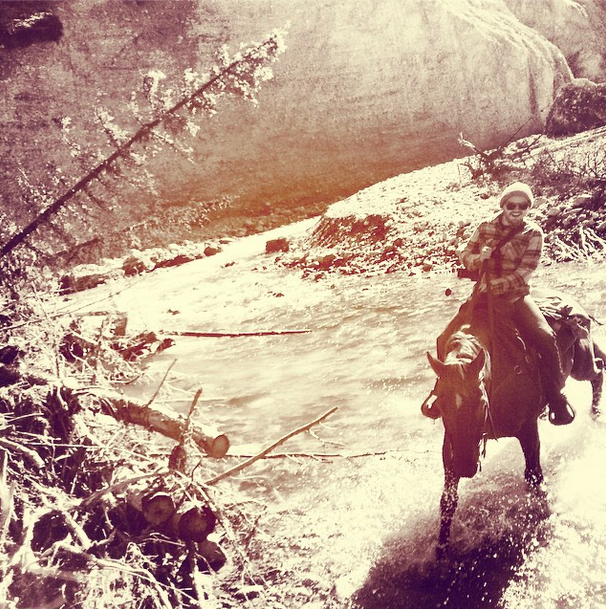