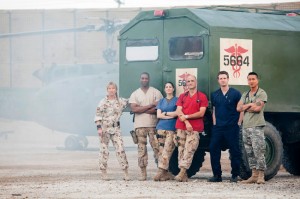 Fresh off their hit from last summer’s Rookie Blue, Global launches a new show tonight called Combat Hospital. Based in Kandahar, but filmed in Toronto, the show follows the same formula that made Rookie Blue a hit: young, beautiful people doing dangerous and exciting things. The decision to place the hospital in Kandahar will rightfully raise some eyebrows and Global is hoping some eyeballs.

Since we hear about Kandahar very often, but don’t seem to know about it very often, I thought this would be an excellent opportunity to talk about the five things Combat Hospital taught me about the life and the war-torn country.

Kandahar has great cell phone service! I can’t get service in my bathroom, you’ll be happy to know that Canadian cell phones work in Kandahar!Â  Missing out an an amazing sponsorship opportunity, no carrier is mentioned, but I guess it’s good to know that in the middle of a desert, halfway ’round the world, your ex can still text you.Â  Phew!

The Hurt Locker this is not!Â  While the Oscar winning film had tensioned filled seconds, this war drama has singer-songwriter montages and pregnancy tests.Â  Not that’s bad, I think I just miss Jeremy Renner

Surgeons carry guns! So how bad-ass is this hospital?Â  Yeah, they carry guns and shoot them too.Â  No, no, no not to use on the patients, but instead on slippery critters that may sneak into the ER.Â  I’m guessing those guns will come in handy at some point!

I really miss the Teenage Mutant Ninja Turtles! Okay, this one was a bit of a stretch, but I was talking to my friend Kevin about the show and who was in it and he said, “Elias Koteas, didn’t he play Casey Jones on the original TMNT movie?”Â  And after a little googling, you know what?Â  He did!Â  Wow!Â  Talk about a flashback!