All the way back in 2005, Air Canada was one of the first airlines to revolutionize the way we watch TV on planes and now it’s hard to imagine a time when most planes didn’t have TVs on the back of each chair. Every now and then you’ll get a lemon of a plane that makes you watch the same movie, but for the most part the modern day entertainment system is pretty standard.

And while Air Canada’s system was one of the first, they haven’t done much with it since then. And I don’t know if you know this, but technology has changed a lot in the past nine years.

With the full acknowledgement that we’re lucky to be flying in the first place, I thought I’d help come up with some ways Air Canada can bring it’s entertainment system to the year 2014. 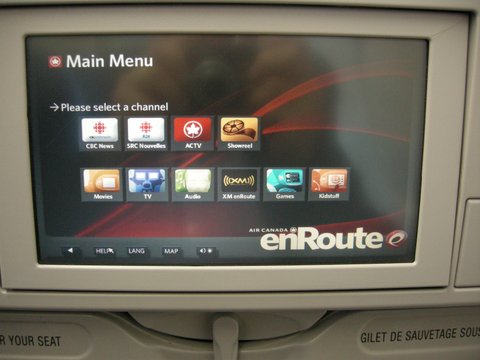 Organize shows by series.
I don’t know about you, but every time I push a button the entertainment system, I assume I’m one push away from the person in front of me punching me in the head. Right now, you’re only option is to pick a genre and then click endlessly as your forced to surf through every episode of every show. Â Why not group all the shows together? Say I want to watch The Good Wife or The Big Bang Theory. Why not let me click on a series and then see all the episodes?

Start with the pilot. (No, not the one flying the plane.)
I still remember that I discovered Nurse Jackie on a particularly long Air Canada flight because they had uploaded the first seven episodes. Same goes for The Goldbergs. But most of the time, it seems the shows that are available are just a random smattering. “Oh cool, they have Game of Thrones, I always wanted to watch that show….wait, why do you they just have season two, episodes three and nine?” Like how many people out there are just waiting to catch episodes three and nine of Game of Thrones? It’d be interesting to see the viewing tallies of the shows that are posted out of order. I say include as much of the first season as possible and if you have the newer ones too, that’s just icing on the cake.

Where are the games already?
Okay, Air Canada. You’ve had games listed since the system’s inception. Where are my games? I doubt I’ll even play them, because why would you want to play anything that requires you pushing on the headrest of the seat in front of you, but if you’re purposely not putting games on the system to see how long it’ll be until some one cracks from the curiosity, well consider me cracked! Where are the games?!

And just for some measure, here’s one thing that I hope Air Canada never changes: Keeping it free! Â While lots of airlines have entertainment systems, very few are actually free! Â Hopefully Air Canada realizes that this is one of its best assets!

What do you think? What your in-flight entertainment pet peeve?