>I have theory. It involves TV shows. Remember when characters from Ally McBeal would show up on The Practice, or vice versa. What about Third Watch and ER helping each other out? Las Vegas and Crossing Jordan. Well usually networks make big promotions about these kinds of events. They are meant to draw more eyes to TV shows that people wouldnâ€™t normally watch.

Well, while I was standing in line for three hours yesterday to audition for that reality show I got to thinking about this. Thatâ€™s when I realized something. Fox is doing this same thing right now and we donâ€™t even know it. They are doing it right under our noses. Now, go with me on this one.

24 is all about terrorists. They always seem to be so angry and they run around and blow up things with crazy bombs. They basically try to ruin everything. And, this is where it gets touchy, every year except for one season most of these terrorists have been brown in nature. Now to be clear, I am not saying that brown people are terrorists. However, 24 is. So what other show has 24 teamed up with? Iâ€™ll give you a clue. He is brown, bombs every week and Iâ€™m pretty sure Jack Bauer would want to electricute him with a light bulb, because God knows I do. Thatâ€™s right: SUNJAYA! (Samosa)

Donâ€™t you see? It all makes sense. Fox treads dangerous water every week with 24. They always have to be careful to try not to offend too many people. But with a show like 24, this often proves difficult. Enter Sunjaya. Nice kid. Cute sister. White mom. (?). Fox is basically saying this: Brown people on Monday nights are very bad. They want to destroy the world. However, on Tuesdays? They are great! We love them! Look how friendly brown people are, they have crazy hair and always smile. Sure they canâ€™t sing, but look at his hair, he is like a doll. Dress him up!

Itâ€™s like that whole for every action there is a reaction. I know this isnâ€™t a completely thought out theory. However it is one that I will continue to work on. How am I going to do this? Iâ€™m not to sure yet. But Iâ€™m pretty this girl has something to do with it: 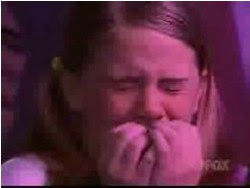 Nancy Grace says: Who’s Darfur? Have you seen how cute this kid is?